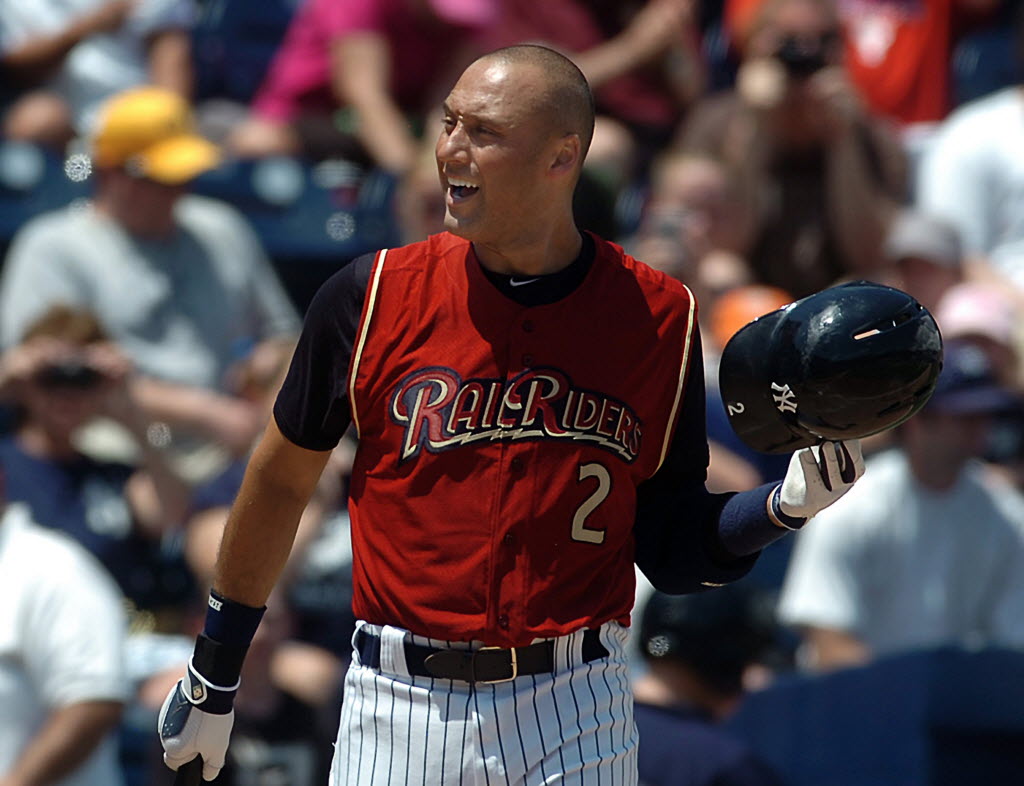 The highlights of Derek Jeter’s Hall of Fame career with the New York Yankees are well-chronicled. Less renowned are the thrills he provided to minor-league fans in a series of rehabilitation stints — which took place, on average, every few years over the course of his 20 professional seasons.

After claiming the Yankees’ full-time shortstop job in 1996, Jeter made brief rehab appearances in 1998 at Triple-A Columbus, 2000 at Class A Tampa, 2003 and 2011 at Double-A Trenton, and 2013 at Triple-A Scranton/Wilkes-Barre. Some of these stints were as short as one game, but each gave minor-league fans a chance to see a star up close.

Jeter’s final rehab assignment — meant to help him rebound from a broken ankle suffered in the 2012 League Championship Series and ensuing surgery — stirred particular attention because it gave fans and media a chance to see a surefire Hall of Famer. When he took a temporary spot on the Scranton/Wilkes-Barre RailRiders’ roster, the 39-year-old shortstop had already collected more than 3,300 hits, contributed to five World Series titles, won the American League Rookie of the Year award and five Gold Gloves, and made 13 All-Star teams.1 Jeter had also led the American League in hits in 2012, with 216. “This is unbelievable,” a local fan said. “To see him come around is a big thing to us in this area.”2

Jeter made his first appearance with Scranton/Wilkes-Barre — and his first of the 2013 season — in a July 6 International League game against the Lehigh Valley IronPigs. He was quiet in that game, going 0-for-2 with a walk and playing five innings at shortstop.3 The next day, Jeter started against the IronPigs as the designated hitter, and fans in northeast Pennsylvania got to see a little more of the Yankee legend’s talents.

The matchup brought together two teams hovering around the .500 level in the North division of the International League. Allentown, Pennsylvania-based Lehigh Valley, a Phillies farm team, sat in second place with a 46-44 record, seven games behind the division-leading Pawtucket Red Sox. Scranton/Wilkes-Barre’s 43-46 record placed the team 9½ games back, fifth in the six-team division.4

The IronPigs’ starting pitcher, 30-year-old lefty Tom Cochran, had been an 18th-round draft pick of the Boston Red Sox a decade before from Middle Georgia State University. Cochran never played in the majors but came about as close as possible. He earned a call-up from the Cincinnati Reds in May 2011 but was returned to the minor leagues after one day without being tapped to pitch.5 With the IronPigs in 2013, he went 3-8 with a 5.44 ERA in 19 starts. He also appeared in Class A and Double A that year, his final professional season.

Manager Dave Miley’s RailRiders lineup was almost entirely made up of players who appeared in the majors; only shortstop Walter Ibarra and right fielder Addison Maruszak did not do so.6 Jeter led off as DH. The starting pitcher was 28-year-old lefty David Huff, who won 11 games as a rookie with the Cleveland Indians in 2009 but saw his effectiveness decline thereafter. The Yankees had picked him up off waivers from Cleveland two months earlier, on May 25. That season, he went 3-1 with a 5.50 ERA in 14 games at the major-league level between the two teams. In succeeding seasons, he bounced through the organizations of the Giants, Dodgers, Royals, Angels, and Diamondbacks.

PNC Field, home park of the Scranton/Wilkes-Barre team, is located in neither Scranton nor Wilkes-Barre, but rather in the nearby borough of Moosic.7 The 8,315 fans who packed the park on an 86-degree day saw the visitors from down the Pennsylvania Turnpike get on the board first.8 Asche singled with two out and stole second, and designated hitter Cody Overbeck doubled him in for a 1-0 lead.9 Overbeck led the IronPigs that season with 19 home runs and finished second on the team with 65 RBIs, but was not called to the major leagues.

Jeter wore his familiar number 2 on a red sleeveless vest-jersey with a black T-shirt underneath, donning his Yankees batting helmet at the plate.10 He gave the fans something to cheer for by drawing a leadoff first-inning walk, but was erased when left fielder Thomas Neal hit into a double play.11

The IronPigs’ lead lasted only until the bottom of the second. With two out, Maruszak and center fielder Corey Patterson hit back-to-back solo homers to give the RailRiders a 2-1 lead. Patterson was playing out the string in the minors after a 12-season big-league career, and 2013 was his final professional season, divided between Scranton/Wilkes-Barre and Tacoma of the Pacific Coast League.

The RailRiders piled on in the third inning. Shortstop Ibarra singled, and Jeter moved him to second with a ground single to left — his first hit of the season and his only hit of the day. Cochran struck out second baseman Brent Lillibridge and Neal. But first baseman Randy Ruiz followed by lining a ball over the left-field foul pole for a three-run homer and a 5-1 lead.12 It was the eighth homer of the year for the 35-year-old Ruiz, whose season total of 17 tied him for fourth in the league. Like Patterson, Ruiz had already completed his three-season major-league career but continued to play in the minors. He remained active as late as 2018-19 in the Puerto Rican Winter League.

Cochran worked five innings. He gave up four hits and five runs, all earned, with three walks and four strikeouts — including one of Jeter in the fifth inning. Well-traveled 36-year-old righty Mike MacDougal, an All-Star with the Royals a decade earlier, worked the sixth and seventh for the IronPigs. The RailRiders touched him for a run in the seventh, again with two out. Ibarra singled, Jeter drew his second walk, and Lillibridge singled home Ibarra for a 6-1 lead.13 Jeter “smoothly sprinted” into third on the throw home but did not score.14

Huff worked six innings. He scattered five more hits after the first inning, including two doubles, but allowed no additional runs. He did not walk a batter and struck out six. Reliever Dellin Betances held Lehigh Valley scoreless in the seventh and eighth. The IronPigs logged another run in the ninth against a third reliever, Josh Spence. Right fielder Leandro Castro singled, Martinez walked, and Lerud singled to load the bases. One out later, Hernandez singled in Castro to make it 6-2.15 The game ended shortly afterward after 2 hours and 48 minutes, with Huff getting the win and Cochran the loss.

After the game, Jeter downplayed concerns about his ankle and said he looked forward to playing shortstop again.16 He played seven games for Scranton/Wilkes-Barre, hitting .222 with a double and an RBI, before getting the call back to the majors. But Jeter was not in shape to help the Yankees, and hit only .190 in 17 games before calling a premature end to his season in September.17 Jeter announced his planned retirement before playing a final full season in 2014, hitting .256 with four homers in 145 games. 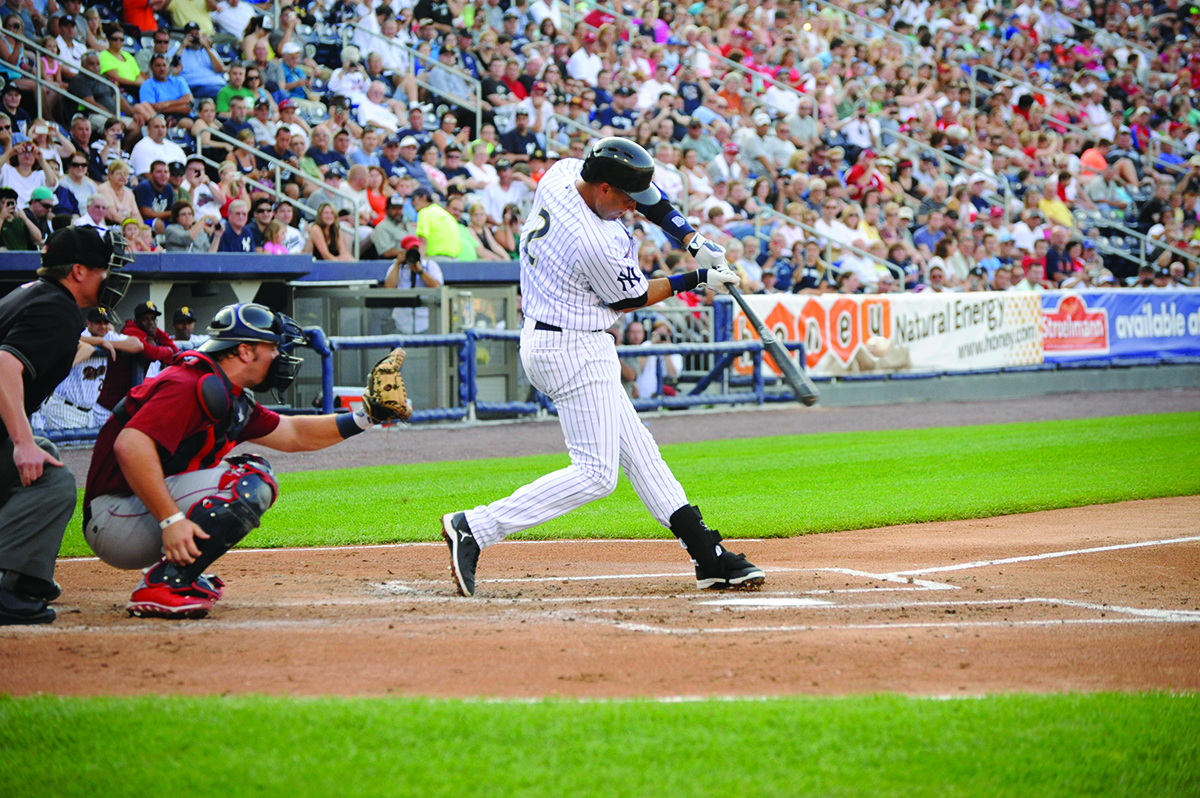 1 Jeter was also named to the American League All-Star team one final time, in 2014.

6 Maruszak was actually the RailRiders’ busiest shortstop in 2013, making 41 appearances at the position. He also appeared 24 times in the outfield, 19 times at third base, 13 times at second base, and twice at first base.

7 Most independent Pennsylvania municipalities are classified into one of three types – cities, townships, or boroughs. Many boroughs are roughly akin to small towns; Moosic had a population of less than 6,000 residents as of the 2010 US census, smaller than the capacity of its baseball park.

8 Allentown, where the IronPigs play, is roughly an 80-minute drive from Moosic. The most direct route is via Interstate 476, labeled in that area as the Northeast Extension of the Pennsylvania Turnpike.

11 Donnie Collins, “Yankees Captain to Play Field Today,” Times-Tribune, July 8, 2013: B1. The newspaper also ran a breakdown of each of Jeter’s at-bats, titled “Jeter’s Day at the Plate.”