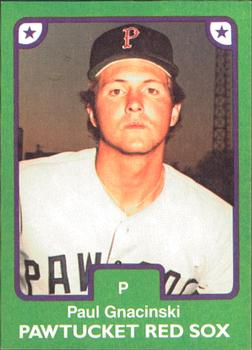 On July 8, 1984, before a reported crowd of 3,846 at Pawtucket’s McCoy Stadium, the Pawtucket Red Sox swept a doubleheader with the Rochester Red Wings. The pair of wins, coupled with a split by the Maine Guides in their twin bill with the Syracuse Chiefs, propelled Pawtucket into a tie for first place with the Guides in the Triple-A International League.

Meanwhile, the sweep represented not only the fifth and sixth losses in a row for Rochester, which already claimed the league’s worst record, but also the second consecutive doubleheader the team had lost.

The second game of the twin bill had far less offensive power, but it still kept the fans in their seats until the end when the Red Wings, after trailing from the second inning on, tied the score in the fifth to force extra innings. Indeed, mired in a losing streak that left them 21 games behind the league leaders entering the contest, the cellar-dwelling Red Wings, seeking to change their direction, wore their red warmup jerseys, something they had done previously, although most notably it had been their uniform of choice during part of an earlier 11-game losing streak.

The change in uniform did not, at least initially, appear to have any impact; building upon the momentum from the first game, the PawSox got out to an early lead, scoring twice in their half of the second inning. Pat Dodson led off with a double off right-handed starter Tony Arnold, who, after getting Romine and Malpeso, experienced control trouble, walking catcher John Lickert and first baseman Reggie Whittemore.

Then, with the bases loaded, shortstop Julio Valdez doubled, driving in Dodson and Lickert and giving Pawtucket a 2-0 lead. After the game Arnold bemoaned his early lack of control, saying, “I was too wild in the second inning. I guess that lost me the ballgame there. I was hoping we would get more runs later.”1

After his early woes, Arnold settled down, turning in a stellar performance as he gave up only three more hits through the seventh, but the PawSox’ lead held up until the top of the fifth, when Red Wings shortstop Ricky Jones followed catcher Orlando Sanchez’s single with his fifth home run of the season, a two-run blast that knotted the score. Neither team scored in the sixth, but in the seventh the Red Wings made a bid to end things in regulation. (Games in International League doubleheaders are seven innings long.) With one out and Jones on second and Tucker Ashford on first, right fielder Larry Sheets hit a line drive right at Reggie Whittemore. But the Pawtucket first baseman extinguished the threat by turning the hard-hit ball into an inning-ending double play. The situation was symptomatic of the difficulties the Red Wings, for whom the loss was their sixth in a row, were experiencing. As Sheets observed after the game, “The line drive to Whittemore – that’s just an indication of the way things are going. We seem like we say this after every game but I couldn’t have hit the ball any harder. I saw it well, I stayed down on it, everything they teach you to do.”2 Indeed, it was typical of the Red Wings’ frustration, for after leaving 10 runners on base in the first game, they stranded another nine in the nightcap.

In the eighth (overtime) inning, the Red Wings were unable to follow up on their seventh-inning threat, but in their half of the inning the PawSox jumped on Arnold, who yielded a leadoff single to Lee Graham. In short order, right-handed reliever Mark Brown gave up another hit and found himself facing outfielder Kevin Romine with the bases loaded and no outs. With the infield drawn in to prevent the winning run, Romine singled to right, driving in Graham with the winning run. After the game the PawSox left fielder commented, “With the infield pulled in, I was just trying to make contact, knowing I had a better chance to get through the infield.”3 He added, “We’re really been playing well right now and Rochester just had some tough breaks.”4

Although Brown had given up the final two hits, including Romine’s game-winner, the loss was charged to Arnold, whose final pitching line represented a stellar effort with seven innings, six hits, four walks, and six strikeouts. Although constantly in trouble, Pawtucket right-handed starter Paul Gnacinski had limited the Red Wings to only two runs despite giving up six hits and walking five in his seven innings of work. When the game went into extra innings, the PawSox called on a fresh arm, tapping newly arrived Kevin Kane to pitch the eighth inning. Making his Red Sox debut, the 24-year-old right-hander was credited with the win.

The results of the doubleheader were a clear indication of the different directions in which the teams were heading. While the Red Wings, the Orioles’ top farm team, finished last in the International League with a record of 52-88, manager Tony Torchia’s Pawtucket squad finished the season in fine style, despite losing talented players like Roger Clemens and Dennis “Oil Can” Boyd to the parent Boston Red Sox over the course of the season.

After qualifying for the playoffs as the fourth-place finisher with a regular-season record of 75-65, the PawSox first beat the regular-season champion Columbus Clippers three games to one in a best-of-five series, then won the International League’s Governor’s Cup with a three-games-to-two victory in the final series with the Guides.

Pawtucket’s championship effort was further recognized in the postseason when Steve Lyons was named to the International League’s All-Star team, getting the nod at third base, while a teammate, reliever Charlie Mitchell, was named to the All-Star team and also honored as the league’s Fireman of the Year. Meanwhile, skipper Tony Torchia won the award as the league’s top manager while general manager Mike Tamburro was named Executive of the Year.

The Red Wings’ season represented a stark contrast to that of the champion PawSox. With a record of 52-88, they finished the season 30½ games behind the league-leading Guides and 6½ games behind the seventh-place Syracuse Chiefs. It was the worst Red Wings record in the modern era, and one that by season’s end had earned them the derisive moniker “Dead Wings,”

To add insult to injury, on July 20, less than a week before Rochester was to host the league All-Star Game, as metal framework was being attached to an outfield scoreboard, sparks from the welder’s torch started a fire that destroyed the scoreboard. Unable to fix it before the All-Star Game, the crowd of 2,378, the smallest ever to witness a league all-star contest, could gaze out toward the bleachers, where a tarp covered the scorched scoreboard, a view that served as an all-too-fitting symbol of a season whose once high hopes had long since gone up in smoke.5