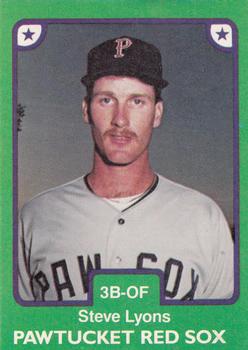 On July 8, 1984, before a reported crowd of 3,846 at Pawtucket’s McCoy Stadium, the Pawtucket Red Sox swept a doubleheader with the Rochester Red Wings. The pair of wins, coupled with a split by the Maine Guides in their twin bill with the Syracuse Chiefs, propelled Pawtucket into a tie for first place with the Guides in the Triple-A International League.

Meanwhile, the sweep represented not only the fifth and sixth losses in a row for Rochester, which already claimed the league’s worst record, but also the second consecutive doubleheader the team had lost.

Having lost the previous day’s game to rain, the PawSox and Red Wings played a doubleheader on Sunday, July 8. The rest afforded by the previous day’s rainout seemed to energize manager Frank Verdi’s struggling Red Wings, who showed some early offensive punch.

After right-hander Francisco Oliveras dispatched the Red Sox in order in the bottom of the first, sandwiching a strikeout of center fielder Lee Graham between a pair of fly outs to left, the Red Wings jumped out to an early lead, scoring three times in the top of the second off Rochford. A single by second baseman Victor Rodriguez followed by a double by catcher Luis Rosado gave the Red Wings runners on second and third with no outs, but when Rochford struck out first baseman Mike Calise, he only delayed the damage as Red Wings right fielder John Valle followed with a run-scoring single.

While Rochford got designated hitter Ricky Jones to pop to first, leadoff man Bob Bonner hit a single that brought home Rosado. John Tutt followed with a double that scored Valle, giving the Red Wings a 3-0 lead with runners on second and third. However, Rochford got Ashford to hit a groundball to shortstop, ending the threat.

The Red Wings’ lead proved short-lived, as the PawSox came roaring back in their half of the inning. In scoring five runs – all charged to Oliveras who left after failing to record a single out in the inning – the Red Sox sent 10 men to the plate.

Oliveras put himself in an immediate hole, walking first baseman Pat Dodson and left fielder Kevin Romine. Third baseman Steve Lyons drove in Dodson with a single and then after Oliveras walked catcher Marc Sullivan to load the bases, designated hitter Dave Malpeso hit a run-scoring single. Then, with the bases still loaded, Oliveras hit shortstop Paul Hundhammer to bring in the third run of the inning.

Right-hander Rich Carlucci replaced Oliveras, but after getting second baseman Chico Walker on a pop fly to third, he gave up a two-run single to Graham, runs that brought Pawtucket’s total to five. But with runners on first and third, Carlucci struck out right fielder Gus Burgess and got Dodson on a popup to third to end the inning.

In the top of the third, Rochester catcher Luis Rosado closed the gap to one with a solo home run, his fourth of the season and a shot that brought Rochford’s outing to a close. However, that blast was the last real threat the Red Wings would muster. Indeed, left-hander Tony Herron and right-hander Charlie Mitchell allowed the Red Wings only four singles the rest of the way, with the visitors not getting another runner past second base.

The Red Wings finished the night with four runs on 12 hits, while leaving 10 men on base. Mitchell, who finished on the mound for the Red Sox, raised his record to 7-2, allowing no hits and striking out four in his 2⅓ innings of work.

Meanwhile, although the Red Sox got only three more hits the rest of the way, by coupling designated hitter Dave Malpeso’s leadoff single with an error, they added another run in the fourth. Then in the fifth, Steve Lyons hit his 16th homer of the season, a solo shot, to cap the PawSox scoring.

Unable to record an out in the second inning and thus charged with the PawSox’ first five runs, Oliveras took the loss, the first decision of the season for the young right-hander.

Between the two games, members of the Society for American Baseball Research played a three-inning, vintage baseball exhibition game on the field to commemorate the 100th anniversary of the 1884 postseason series between the Providence Grays and the New York Metropolitans.