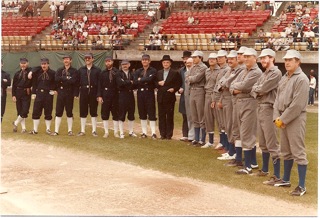 In a nod to the organization’s roots in historical research, as well as its commitment to bringing the game’s history alive, in 1984 the annual SABR convention included an abridged reenactment of the 1884 World Series. While the best-two-out-of-three contest between the Providence Grays and the New York Metropolitans is not recognized as the inaugural fall classic by Major League Baseball, it is believed to be the sport’s first championship showdown and, coming at a time when the game’s popularity was soaring, it was certainly a harbinger of the things to come, including baseball’s assumption of the title the national pastime.

The reenactment, a testament to baseball’s distinctive historical roots as well as SABR’s deep devotion to the sport’s history, proved an enjoyable and instructive interlude of the kind that no other sport can really offer. 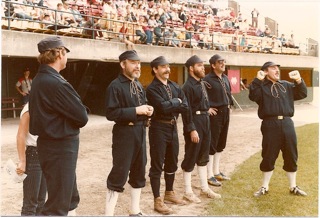 The game, staged at McCoy Stadium, the home of the Pawtucket Red Sox, represented a break from the organization’s annual convention, a three-day affair being held that year at Brown University in Providence, Rhode Island. The 5½-inning affair was played in two parts, before and after the first game of a Pawtucket Red Sox-Rochester Red Wings doubleheader.

The exhibition, originally scheduled for the day before, was a casualty of rain and when the postponed Red Sox-Red Wings contest was rescheduled as part of a Sunday doubleheader, the scheduled reenactment became a doubleheader of a sort of its own, with part taking place before the first game and the final innings being played before the second game of the twin bill.

In advance of the convention, the organization had sought volunteers and in the end enough members not only agreed to play, but also to pay the $200 necessary for the period-piece uniforms made by the Textiles Department of the University of Rhode Island working from photographs supplied by SABR, so that the event, designed to reinforce the group’s commitment to replicating both the fact and spirit of the time, became a reality.1 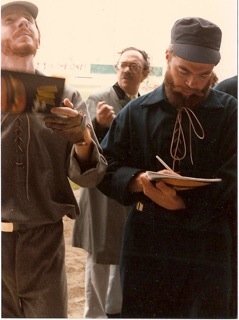 With the requisite single umpire, in this case SABR member and Barrington, Rhode Island, resident Eric Simonsen, whose handlebar mustache, tailcoat, and top hat recalled the vaudeville barkers of the time as much as the guardians of the game, the teams sought to conjure up memories of the best-two-out-of-three series that had seen the Metropolitans swept by the Grays in 1884.2 Memories they may have offered, but a duplication of the result was not to be as the SABR members impersonating the Metropolitans squeaked out a 4-3 win in the 5½-inning contest.

But in fact, it was not a duplication of the result but rather the showcasing of a very different game of baseball that was at the heart of the exhibition. Players had been briefed on the different rules but while a single umpire wearing a top hat certainly offered a different look, it was nothing compared to the fact that there was not a glove to be found, something that was no small thing to the players who had to field the batted balls that were in many cases the result of a hitter’s request for a pitch to be thrown in a specific –and preferred – spot. Indeed, while a pitcher’s failure to do so could result in the umpire ruling the pitch an “unfair ball,” the hard hits that were as often a result of such gentlemanly offerings were certainly no less fair to the gloveless fielders. And yet such were the rules of a game played by gentlemen of the time. Other highlights of the nineteenth-century version of the game that were brought back to life for at least one afternoon included the fact that six balls were required before a batter earned a walk, and if a pitcher hit a batter, the ball was ruled a dead ball, but unlike modern times the batter remained at the plate, putting himself at risk again, or more likely putting in a request for a more hittable offering.3

Not surprisingly with only one umpire in attendance, his competence, if not his eyesight, was called into question with arguments being waged over everything from an extra ball being smuggled onto the field in an effort to tag a runner to another runner’s attempt to advance to third not by stealing second but by simply ignoring it – instead making a beeline from first to third through the pitcher’s mound.4 All of this made clear the observation of SABR member Syd Cohen, the Grays right fielder, who, in his 60s was one of the oldest players, that “it really is different from the baseball we know it, isn’t it?”5 While participants and observers undoubtedly left with fond and spirited recollections of the day’s events, for those dedicated to the history of the game the reenactment was marred by what one SABR member aptly called “an ironic oversight.” Despite the presence of two full squads made up of individuals of varying ages all of whom shared a passion for the history of the game, as well as an attendant game crowd reported at 3,846, many of whom were no less committed to the game’s history and heritage, no one apparently no one saw fit keep a scorecard.6

Indeed, while the contest earned coverage –as well as a photo – on the front page of the Providence Journal, and while the Metropolitans, after a century, apparently gained a measure of revenge by a score of 4-3, irregularities in the modern scoreboard left some refusing to accept that result.7 And in fact, while the game undoubtedly remains vivid in the memories of those who played and witnessed the epic contest, in the end, the lack of a box score makes it impossible for anyone to, in the words of Casey Stengel, “look it up.”