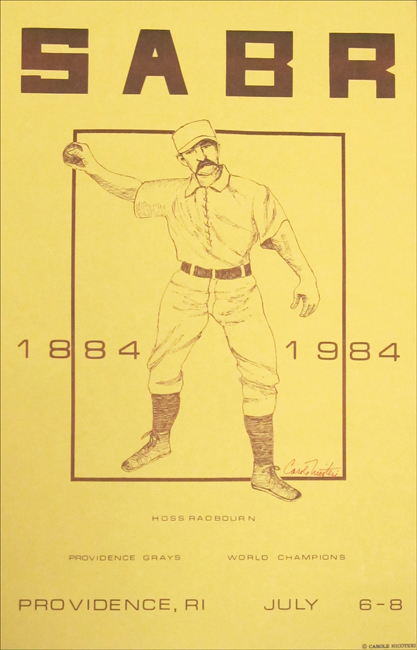 Because the 1984 SABR Convention was in Providence, Rhode Island, it was perfect for a relatively new member from Boston to attend. I could drive to and from the Brown University site quite easily. It was at later conventions that I learned how important the nighttime sit-around-and-talk baseball sessions were to enjoying the national gathering.

To celebrate the 100 years since the Providence Grays beat the New York Metropolitans, SABR folks planned a recreated 1884 game, complete with authentic woolly uniforms, to be played at McCoy Stadium (home of the AAA Pawtucket Red Sox) before a regularly scheduled International League game.

A call went out and eventually two teams worth of players signed up to relive the 19th Century Championship, first by paying $200 for the uniform. Players were told the 1884 rules and practiced some fundamentals of the era. No one knew how these re-enactors would play without gloves (sneakers allowed), heavy bats and sort of what passed for an 1884 ball.

Then Mother Nature postponed the historic game with a rainstorm. The one-day delay meant that some players had already left for home but those remaining were to play a few innings between games of a doubleheader. The curious PawSox crowd was a good audience for 19th century ball with its “called pitches” and basepath shenanigans. There were crazy plays to be sure, involving belt-tugging, rundowns and run ins, much to the delight of the onlookers. 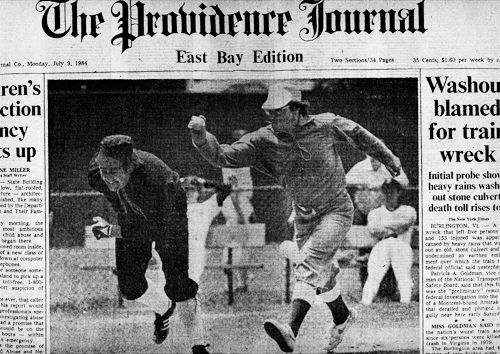 On a bang-bang bunt play at first base I ran into New York Met Rev. Jim Smith III (who has a true ballplayer’s heart), a collision which knocked us both sprawling. Years later we met again and became good friends and, one night at dinner at my house, he retold the story and wondered aloud who smacked into him that Sunday afternoon. I think I was out, but I had already scored a run from the leadoff position (I was portraying centerfielder Paul Hines). The Mets supposedly upset us Grays in the three-inning exhibition 4-3, but I’ve always disputed that belief.

Ironically, no one could ever correctly recount the wild scoring plays because with all the greatest SABR minds either in the stands and on the field, not one had thought to record a boxscore of the game. To a first time conventioneer this was an unforgettable oversight.

To go back to the SABR convention history page, click here.