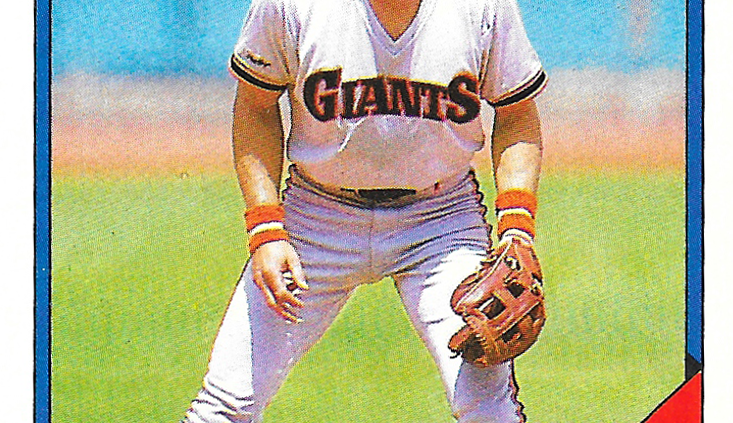 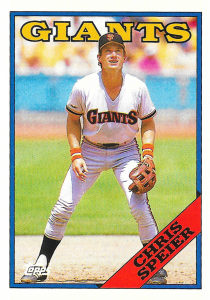 On July 9, the San Francisco Chronicle’s Mark Camps wrote: “If you plan to come to Candlestick and are looking for wild scoring games, save your eight bucks and rent an NBA All-Star game video.”1 By the end of the day, he could have printed a retraction.

Having shut out the Cubs twice and the Cardinals once in their previous three games, the Giants continued their pursuit of the Dodgers on July 9, firmly in second place, but always two or three games behind. Unlike the Giants of Mays and McCovey, the 1988 Giants were doing it with pitching. Chronicle columnist Ray Ratto noted that while in 1987 the Giants had hit 205 home runs, in 1988 they were barely on a pace for half that, and while in 1987 homers had been “cheap and plentiful,” in 1988 the “balls [didn’t] have the joie de vivre, and the bats aren’t as likely to be packed with fulminate of mercury by amateurish cheaters.”2 These different Giants had lost only two games in July, and hoped to continue their streak of three shutouts in Saturday’s game at Candlestick Park.

The Cardinals were not faring nearly as well, stuck in fifth place in the National League East when the sun set on July 8. They had a 38-46 record and had won but a single game in July, squeezing by the Padres, 5-4, on July 3. Injuries to Cardinal pitchers could have been blamed, but manager Whitey Herzog would have none of it. “Even with three starters out and (Ken) Dayley out for five weeks, we’ve pitched well. Our problem has been run production.”3 Herzog continued, referencing Joaquin Andujar’s  observation about the previous year: “I think Joaquin … had it right. ‘We’ve got eight leadoff men and Jack Clark,’ and now we don’t have Jack Clark.”4 (Clark, a free agent, had signed with the Yankees). The July 9 game would produce no relief for the bedraggled Cardinals.

Although the Candlestick Park weather had contributed to the Giants’ batting decline in 1988,5 the second game of the series started on a sunny afternoon with a temperature of 80 degrees. The Cardinals lineup featured speed, but not much power. Center fielder Willie McGee, who entered the game batting .319 and slugging .393, was moved from his normal third slot to lead off. He was followed by shortstop Ozzie Smith, (.274/.328). Third baseman Terry Pendleton (.259/.374) and right fielder Tom Brunansky (.267/.444) filled the three and four holes respectively. According to manager Herzog, Brunansky was one of the few Cardinals who had been disciplined hitters in 1988, while McGee and Smith were anxious hitters with runners on base. “I’m sure what he and Ozzie are going through is they’re getting a little tight with a chance to knock in a run,” Herzog said.6 Curt Ford (left field), Jose Oquendo (first base), Luis Alicea (second base), Steven Lake (catcher), and pitcher John Tudor completed the lineup.

The Giants fielded Brett Butler in center, Chris Speier at second, Will Clark at first, with Candy Maldonado in right, Kevin Mitchell at third, Mike Aldrete in left, Bob Melvin catching, and Jose Uribe at shortstop. Hoping for a fourth shutout, Kelly Downs started for the Giants.7 Speier, a 1970 Giants draftee and former three-time All-Star who was back with the Giants as a utility player, got the starting assignment when regular second baseman Robbie Thompson was given the day off to care for a hip injury.8

The top of the first was unproductive for the Cardinals. Downs surrendered only an unproductive single. The bottom produced nothing for the Giants, though Chris Speier did deliver a line-drive double to right.

Downs set the Cards down in order in the top of the second, but in the bottom of the inning things began to happen. Mitchell started the inning with a single and catcher Bob Melvin tagged Tudor for a double to deep center that drove him home. Downs got his first at-bat and drove Melvin in with a single to left. After Butler walked, Speier got his second at-bat and took full advantage, dropping a pop fly over the head of first baseman Oquendo for a double, scoring Downs and Butler. Clark got into the action with a triple down the left-field line, scoring Speier. With five runs scored, Maldonado ended the inning with a groundout to shortstop.

The third inning passed uneventfully, but in the fourth, the Cardinals started coming back. With one out, Terry Pendleton singled to right and Brunansky sent him to third with a double to left. Left fielder Ford grounded out to short, scoring Pendleton, advancing Brunansky to third, and ending Downs’ bid for a fourth shutout. Oquendo’s single to center scored Brunansky. Alicea ended the inning with a groundout to first and the score was 5-2, Giants.

The Cardinals sent right-hander Bob Forsch to the mound in the fifth inning to keep the Giants in check. Speier was the first batter confronting Forsch, both men were California natives, and each was ending a productive major-league career.9 Speier made the most of the confrontation, driving a home run down the left-field line, his third extra-base hit of the day. Forsch then walked Clark and surrendered a single to Maldonado, before Kevin Mitchell deposited another ball in the left-field stands. Forsch set down the next two batters but shortstop Jose Uribe singled and went to second on a throwing error by first baseman Oquendo. This brought pitcher Downs to the plate. Having a big lead and one hit already, Downs lined a hit to center, driving in Uribe. Forsch finished the inning by striking out pinch-hitter Donnell Nixon. The Giants were now ahead 10-2.

Downs got through the top of the sixth without incident, but Speier led off the bottom of the frame to face Forsch again. This time the result was a single; all that remained for a cycle was that most elusive of hits, a triple. Clark singled and Maldonado advanced Speier to third on a fly to center. When Mitchell singled to drive in Speier, Forsch’s day was done. At this point Herzog started lifting starters, and brought Steve Peters in to pitch, but to no avail. Joel Youngblood, who had replaced Aldrete in left, scored Clark on a sacrifice fly, and Melvin cleared the bases with a homer to right-center. Giants manager Roger Craig then inserted Ernie Riles to pinch-hit for Uribe, but he struck out to end the inning with the Giants leading 14-2.

Downs continued his dominance in the Cardinals’ seventh, surrendering only a double to Duane Walker, pinch-hitting for Ozzie Smith. Then the Giants resumed their assault on reliever Peters. Harry Spilman batted for Downs and walked, Nixon, redeeming his previous strikeout, singled to center, sending Spilman to second. Now Speier, a triple short of the cycle, sent a liner into right field and started chugging. As he rounded second, third-base coach Bill Fahey put up the stop sign, but Speier ignored it.

“I was just thinking about that triple,” Speier later explained. “You get that close, you go for it. I was getting a little weary, though, coming to the bag.”10 Fahey added, “Speier’s not noted for his speed, and I wasn’t thinking about his cycle. I knew he had a couple of doubles and a home run, but it didn’t register. Anyway, he came around with his head down, didn’t even see it.”11 Speier had his triple, and the cycle.

Five pitches later, Will Clark drove Speier in with a homer to right, bringing the score to 18-2. Peters, soldiering on, got Maldonado to pop out, but Mitchell touched him for a single. Youngblood flied to center for the second out. Peters walked Melvin to bring Ernie Riles to the plate for another go. On the first pitch, Riles unloaded another homer to deep right, scoring Mitchell and Melvin ahead of him, making the score 21-2. Riles’s homer was acknowledged at the time as the 10,000th home run in Giants franchise history, making them the second team, after the Yankees, to reach this total.12 The homer ended the scoring, as Giants relievers Joe Price and Atlee Hammaker completed the eighth and ninth innings respectively.

The San Francisco press was exuberant. Examiner writer Edvins Beitiks wrote: “After three businesslike, no-nonsense outings by the Giants’ pitching staff, the hitters took over Saturday, turning Candlestick Park into a “Cycle-O-Rama and Batting-Go-Round, the House of Chuckling Fun and Land of 10,000 Homers.”13 Giants manager Roger Craig said, “Five home runs, the 10,000th homer, all that hitting, everything that happened, I’ve never seen that before as a manager. Unbelievable.”14

Winning pitcher Downs had slightly mixed emotions about the game: “I wanted a complete game, but you had Joe Price down there who hadn’t pitched in 12, 13 days and Atlee (Hammaker) needed some work, so …”15

Riles did a fine job of keeping his homer in perspective: “So many guys before me, Willie McCovey. Willie Mays. But that’s the way it is. Seems like the new guys … even a pitcher … are the ones who come in and get the homers on something like this.” He added, “I didn’t have any idea about it. I was rounding third base when the announcer said it was 10,000. I had no idea at all. Roger Craig came over and said he wanted the bat for the Hall of Fame and I gave it to him. … I’ve got plenty of wood.”16  Giants catcher Bob Brenly summed it up for the winning side: “Fun, it was just a real fun game to watch.”17

The next game was the last before the All-Star break, and things returned to normal as the Giants won 2-1, perhaps justifying Mark Camps’ suggestion about renting an NBA All-Star Game video.

5 “Balls that would have threatened the advertising panels on the scoreboard last July are dying in front of the warning track this year,” observed Ray Ratto, in “The Aldrete Experiment.”

11 Edvins Beitiks, “There Was No Stopping Speier on His Triple.”

14 Ibid. Craig’s assessment was correct. A few days after Riles’s homer, Rob Knies of the Oakland Tribune found that the  reference book on which the Giants had relied had failed to include 26 home runs hit by the Troy (New York) Trojans,  a different franchise which provided most of its roster to the Gothams when they entered the National League in 1883. Based on this premise, Knies concluded that the 10,000th homer had been hit by Will Clark against the Astros the previous June 3. In 2001, when the Giants were nearing their 12,000th homer, two baseball historians discovered that the Trojans were a different franchise and thus the 26 home runs should not be credited to the Gothams (Giants) franchise. This led to the discovery that Riles’s homer had actually been only the 9,998th in franchise history. The 10,000th home run was actually hit by Robbie Thompson on July 17, 1988, in Pittsburgh. Henry Schulman, “Giants Notebook/Thompson has HR Milestone, for Now,”  May 26, 2001, sfgate.com/sports/article/GIANTS-NOTEBOOK-Thompson-has-HR-milestone-for-2915329.php.