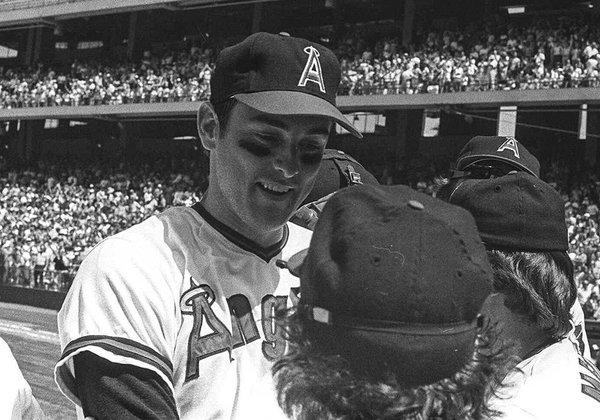 Nolan Ryan’s right elbow was killing him. Despite a gaudy 8-3 record and a league-leading 87 punchouts, the fireballer from Texas knew he was pitching on borrowed time as he prepared to make his 12th start of the 1975 season, against the Baltimore Orioles at Anaheim Stadium. Ryan’s pain might have been the best-kept secret in baseball. He tossed just 11 innings in spring training while the Angels publicly claimed a right calf injury was the cause of Ryan’s limited use. That subterfuge seemed to work when the Express got off to a scorching start, winning eight of his first nine starts, including three shutouts. There was talk of a 30-win season, but the 28-year-old right-hander had been clobbered in his last two starts, yielding 11 earned runs and five home runs in 13 innings. Surgeons determined in May that bone chips in Ryan’s elbow were the source of his pain; however, neither Ryan nor the Angels were prepared for a season-ending and potentially career-altering surgical procedure.1 Now in search of his 100th career victory, the 28-year-old hurler must have harbored concerns that he’d have to wait until 1976 to capture it.

To call Ryan a workhorse was an understatement. In his first three seasons with the Angels (1972-1974) after his acquisition from the New York Mets, Ryan had posted a 62-48 record, logged 942⅔ innings, fanned 1,079 batters (a major-league record for a three-year stretch), and tossed three no-hitters. Dick Williams, the Angels’ skipper, was worried for the health of his All-Star hurler, and opted for a five-man rotation in 1975, much to Ryan’s chagrin. According to the Los Angeles Times, Williams acquiesced to the ever-competitive Ryan’s desire to move up a day to face the Orioles on Sunday afternoon when the Southern California sun was sure to make his heater even more difficult to see.2

The matchup between two cellar-dwelling teams drew a crowd of 18,492 to the Big A. Manager Earl Weaver’s Orioles (18-26), losers of 11 of 12 games before taking the first two games of the three-game set in Anaheim, were among baseball’s biggest early-season disappointments. The Angels (22-26), who had finished in last place in the previous season, were in familiar territory.3

“That’s what I am going to throw today,” said Ryan, handing catcher Ellie Rodriguez a marble as the battery finished their warm-ups.4 Rodriguez, making his first start in four weeks since coming off the disabled list, didn’t doubt him after Ryan fanned two in the first. Struggling with control early in the game, Ryan avoided trouble in the third when he issued a one-out walk to Mark Belanger, who stole second. After fanning Ken Singleton, Ryan issued his third walk of the game, to Tom Shopay, but ended the threat with his fifth strikeout victim, Al Bumbry.

California tallied its first run off Baltimore’s starter, southpaw Ross Grimsley, when Mickey Rivers, Tommy Harper, and Dave Chalk connected for consecutive two-out singles, the second of which produced the game’s only run, in the third. After a breakout season in 1974 (18-13 and 295⅔ innings), the 25-year-old Grimsely had struggled thus far in 1975 (1-6, 4.90 ERA). His afternoon ended the next inning after he yielded consecutive one-out singles. He was replaced by right-hander Wayne Garland, who almost matched Ryan’s exploits by holding the Angels to just one hit, a single by Jerry Remy in the fifth, over 4⅔ innings.

After breezing through the fourth, fifth, and sixth innings, punching out two and walking none, Ryan experienced his most difficult inning of the game. According to the Los Angeles Times, he had given up “nothing resembling a hit” until Tommy Davis, pinch-hitting for DH Don Baylor, smacked what the paper called a “chopper over the mound.”5 Second baseman Remy made a spectacular stop, pivoted and threw to first baseman Bruce Bochte. Umpire Hank Soar emphatically called out Davis, incurring the wrath of Weaver and first-base coach George Staller, who both argued vehemently that Bochte was off the bag. Angels beat writer Ross Newhan opined that any batter other than the 36-year-old Davis, suffering from sore knees, would have been safe.6 “It was a do-or-die play,” said Remy. “Fortunately I was shading toward the middle or I’d have never reached the ball.”7Remy’s effort was not lost on Ryan. “Jerry’s play was a big one,” he said. “When he made it, I said to myself, ‘This might be our day.’”8

But Ryan’s troubles were just beginning. He issued his fourth and final walk of the game to the next batter, Bobby Grich. Shortstop Billy Smith bobbled Lee May’s sharply hit grounder for a clean error.“It was a mental error,” said the rookie after the game. “If I would have been in the right spot I wouldn’t have been handcuffed by it.”9Grich and May advanced a station on Brooks Robinson’s grounder to third. Angels pitching coach Billy Muffett walked to the mound to give Ryan, a notorious fast worker at this point in his career, a breather, after which Ryan dispatched Elrod Hendricks on a popup to third.

The partisan crowd, which had been cheering loudly on every pitch Ryan threw since the seventh inning, gave the hurler a standing ovation to begin the ninth. After retiring Bumbry on a popup to left and Davis on an infield grounder, Ryan ended the game in 2 hours and 1 minute on what sportswriter Don Merry described as a “slow tantalizing changeup” to freeze Grich and record his fourth no-hitter on his last 84 starts.10 “Damn right he fooled me,” said Grich.“I wasn’t thinking anything, just looking for the fastball, but I didn’t expect a changeup, and he got it in a perfect spot, low and away.”11

Ryan calmly walked to the dugout after tying Sandy Koufax for the most no-hitters in major-league history. But with fans chanting, “We want Ryan,” he returned to the field to wave to the crowd.12 “It’s nice to have the recognition,” admitted the modest Ryan, who refused to ponder how many no-hitters he might throw in his career. “I just don’t go into games thinking no-hitter and I don’t place that much emphasis on the single accomplishment.”13 In his low-key and self-effacing demeanor, Ryan focused on the team, which won for the first time in six games and ended a 26-inning scoreless streak. “We haven’t been aggressive,” he said. “We needed something to pick us up.”14

In fashioning his 20th shutout as an Angel to break Dean Chance’s team record, Ryan tossed 147 pitches, including 91 for strikes, and struck out nine. “It wasn’t like the last time, when it was all hard stuff,” said Ryan, comparing this no-hitter with his three others, in which he fanned 12, 17, and 15 respectively. “I had good velocity today but I also had a good curveball and a good changeup, said Ryan, who admitted that he struggled with control of his fastball much of the game.”15

Ryan, who had led the majors in strikeouts and walks in each of the previous three seasons, seemed most pleased with his changeup. “I can hit spots with it now,” he said. “I have confidence in it. Last year I didn’t try it much because I only had confidence in it at times.”16Said Ryan’s batterymate, Ellie Rodriguez: “We had a pattern going all day. If he got behind, he’d throw the curve. He had good location and he kept them honest.”17 Dick Enberg, the Angels’ radio broadcaster on KMPC, praised Ryan as a “pitcher” and not a just “thrower” for his ability to combine power and finesse to keep the Orioles guessing all afternoon.18

Weaver, who eschewed hard-throwing strikeout pitchers in favor of control artists, seemed genuinely impressed with Ryan. The last time Ryan faced the Orioles, on May 18, he held them hitless for 5⅓ innings, eventually finishing with a two-hitter over 8⅔ innings, but walked eight. “[H]e certainly was more complete today,” said the feisty skipper. “You don’t know what to do up there against him. You sure can’t wait for that curve.”19

Ryan appeared on his way to matching Johnny Vander Meer’s feat of consecutive no-hitters when he held the Milwaukee Brewers hitless for 5⅓ innings in his next start, on June 6, before settling for a two-hit shutout. But with elbow pain intensifying, Ryan had difficulty dialing up his heater and controlling his pitchers. He lost his next four starts, and eight consecutive decisions, posting a 6.39 ERA in 56⅓ innings, and yielding 67 hits and 43 walks. After he tossed six innings to beat the New York Yankees on August 24, Ryan’s season ended prematurely. In September Ryan and the Angels held their collective breath as the pitcher underwent surgery. Many sportswriters and fans wondered if the Express could recover and remain a hard thrower.

Ryan returned in 1976 and led the AL in strikeouts for the next four seasons.

3 The Angels were in last place in the AL West, just percentage points behind the Chicago White Sox (20-24).

15 Alex Sachere, Associated Press, “Everyone Except Ryan Was Under Pressure During His No-Hitter,” Corpus Christi (Texas) Caller-Times, June 2, 1975: 12.