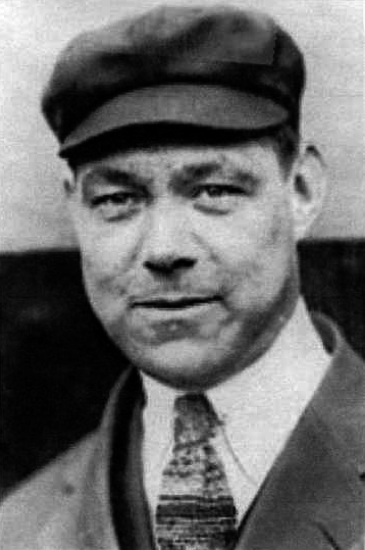 The umpire was a fish.

Some Yankees said so.1

The New York ballplayers believed their Thursday afternoon game in Detroit should have been called long before it reached the ninth inning. Rain, wind, and hail began their assault midway through the contest and grew stronger as the game progressed, dousing and endangering players and the few dedicated spectators who braved stormy conditions at Navin Field.

“But umpire Brick Owens insisted on the players being drenched,” the New York Times reporter wrote the next day. Many ballplayers, the writer continued, insisted that anyone who loves rainy, wet conditions like Owens seemed to, must have similar traits to a fish.2

Dark, threatening clouds arrived at the ballpark early and brought rain and lightning in the fourth inning.

The Yankees’ thunderous bats began booming in the second.

“There was so much noise at Navin Field this afternoon that it was difficult to distinguish between the claps of thunder and the Yankees thumping the ball,” the anonymous Times reporter wrote.

After pitching a scoreless first inning, Tigers starter Frank Okrie dealt with control issues in the second. He walked the bases loaded, issuing free passes to Babe Ruth, Ping Bodie, and Truck Hannah. Hitting a few ticks below .220, Yankees pitcher Carl Mays came to the plate with two outs and smacked an Okrie offering over the head of right fielder Harry Heilmann. The ball rolled to the fence, 370 feet from home, clearing the bases.

The Tigers pounced back with two runs of their own in the bottom of the second. First baseman Babe Ellison smacked a double to center with one out, and Babe Pinelli knocked him home with a triple down the right-field line: Yankees 3, Tigers 1.

Eddie Ainsmith batted next in this scrambled Detroit lineup. Tigers coach and acting manager Jack Coombs picked the day’s batting order by tossing player names into a hat and picking them one-by-one in hopes of snapping the team’s five-game losing skid.4

The shakeup seemed to be working when Ainsmith ripped a Mays pitch into left field. Pinelli scored from third, cutting the Yankees’ lead to 3-2. Mays quickly regained control of the inning; however, striking out the next two batters.

It didn’t take long for the Yankees to get traffic on the basepaths in the third inning. Bob Meusel, hitting close to .360, popped a single to left. Wally Pipp’s sacrifice moved Meusel to second, setting up another showdown between Okrie and Ruth, who was “batting into the teeth of a furious gale,” the Times reporter wrote.

With a runner threatening in scoring position, Detroit fans didn’t want to see another walk given to the slugger. “The crowd implored Okrie to whiff Ruth,” the Times reported, “but Babe caught one on the end of his club and thumped a home run into the right field bleachers, propelling Meusel over the plate ahead of him.” Ruth’s 16th blast of the season gave the Yankees a 5-2 advantage and “satisfied even the most skeptical of fanatics,” at Navin Field.

Just as in the second inning, the Tigers threatened in the third, scattering Mays’s pitches around the park. Center fielder Chick Shorten smacked the ball back up the middle, bouncing it off Mays’s shoes and through the infield for a single. The right-handed pitcher also had no answer for Bob Veach, who clobbered a double to right field that pushed Shorten to third with one out. Ruth’s lack of fielding dexterity in right made him look “like a chump” on the play, the Detroit Free Press wrote.

The infield defense, however, bailed Mays out of the jam. Pipp caught a sharp liner at first from Heilmann for the second out, and Ellison grounded to second to end the third inning.

The weather worsened in the fourth as a wall of rain began to drum the field; it grew heavier as the game progressed. “It was dark and gloomy and the rain came down in buckets, and the wind howled just as it does in the third set of a melodrama,” the Times reported. “And it hailed — sweet sandwiches, how it hailed!” Some of the hailstones were almost as big as eggs.6

The game played on despite dire weather conditions. Elsewhere in the city that afternoon, a lightning bolt killed four Northeastern High School baseball players and injured six others before a game. A woman was struck and killed in her home, and people were reported to have been injured by lightning.7

At Navin Field, the umpire decided to let the game continue, and the Tigers inched closer to tying the contest in the bottom of the fourth. With one out, Ainsmith slowly took his turn at the plate “while the heavens were rolling and the skies were growing bleaker,” the Free Press reported. He drew the ire of “Umpire Owens, who suspected that Eddie was stalling for time.”

Ainsmith eventually walked and Okrie sacrificed him to second. Ralph “Pep” Young then singled to shallow center and Ainsmith scored, moving his Tigers to within 5-3 of the visiting Yankees.

The two clubs traded runs in the “gathering darkness” of the fifth.8

For the Yankees, Pipp stroked a triple to the center field fence and crossed the plate a batter later when Ruth grounded out to Young at second. Pitching with a wet ball, Mays allowed Heilmann to single in the bottom of the inning, sending home Veach, who had doubled to right with one out. After five, the Yankees led 6-4.

Meusel came up for New York with the bases loaded and two out in the top of sixth. He sent a long drive to center field, to nearly the same spot to which he had homered the day before. The ball soared so high, however, that the strong wind held it inside the ballpark and Shorten made a running grab near the fence to end the inning.9

The Tigers growled back for a run in the sixth. Okrie had reached base and was standing on third when Young singled to center field. Okrie dashed home. Bodie grabbed the ball in center and threw it toward home, attempting to nab the runner. Instead, he pelted him in the back. The ball rolled into the Tigers dugout, and Okrie scored his team’s fifth run. The Detroit deficit was 6-5.

The Tigers were moving closer, but Ruth was due up in the seventh. As the rained poured, the Yankees slugger faced off with Okrie and sent a booming drive “that stayed up in the sky so long that it seemed as if the game would have to be called on account of darkness before it came down,” the Times reported. But just like Meusel’s blast an inning earlier, the wind caught the ball, and so did Shorten, near the center-field fence.

“[Ruth and Meusel] both pumped spectacular drives up into the inky sky and the wind was so strong that the ball stopped in its tracks both times and looked like a quinine pill glued to the clouds,” wrote the Times reporter.

Rain and wind couldn’t stop the Yankees from tacking on an extra run in the eighth when Roger Peckinpaugh singled with the bases loaded to score Bodie.

As the game moved to the ninth, the storm intensified. Okrie struggled controlling the wet ball and walked five New York batters. Duffy Lewis and Bodie added singles that pushed across five more runs against an inferior Tigers defense.10

Rain dropped harder in the ninth and the game was stopped and started twice.

“It was impossible to play good baseball under the conditions, but Owens kept them out on the rainy diamond,” the Times reported. “The Yanks at times shot dirty looks at Owens and he probably kept them playing in the rain to wash them away.”

As a “cloudburst and hail storm compelled cessation,”11 the umpire called the game, for good this time. New York lost its five ninth-inning runs, but won the contest, 7-5. The win was the Yankees’ third straight at Detroit and it kept them in a first-place tie with Cleveland in the American League. Meanwhile, the Tigers fell to 16½ games out of first place and remained in last place after grinding through the soggy mess.

“The game should have been called long before the ninth,” the Times opined, but the umpire didn’t relent to the storm until it was too much to bear. “The strong inclination which Owens had for water led many of the players to refer to him as a fish. Not a poor fish, as that term is generally understood, but they argued that anyone who loves to wallow in water as Owens does, must have some sympathetic traits of a fish, poor or rich.”