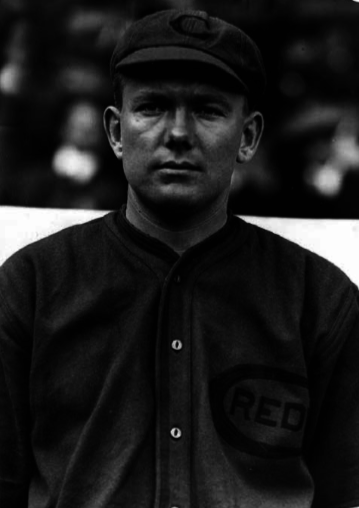 As readers scanned the morning editions of their hometown dailies on June 11, 1915, it was apparent that the National League standings were tightening up. With almost a third of the season in the books, the Philadelphia Phillies held a half-game lead over Chicago. The Cincinnati Reds may have been currently in last place, but they were only 6½ games in back of the Phils. The Reds sported a record of 17-24-4 and were hosting the Brooklyn Superbas in the last of a four-game set on June 12. (Cincinnati played six tie games in 1915.) Wilbert Robinson’s team had won the first four games against the Reds thus far in 1915, and sat in third place with a 23-21-1 record, two games off the pace.

The announced crowd of 3,000 may not have been anticipating the pitchers’ duel that was about to take place. The Reds’ Rube Benton (4-6, 2.92 ERA) took the hill against Brooklyn’s Ed Appleton (1-3, 3.62). Appleton was in his rookie year with Brooklyn after twirling for two years with Fort Worth of the Texas League. He himself was a 6-foot-tall Texan and was at times called Big Ed. Jack Coombs, who also threw right-handed, warmed up with Appleton at the start of the game. But Robinson selected Appleton to start, thus resting Coombs one more day.

Buck Herzog, the Reds’ skipper and star shortstop, went with Benton. A southpaw pitcher, Rube was in his sixth major-league season. To this point, the Queen City was the only home he had known in the big leagues.

The beginning of the game had an ominous feeling for the home team. The Superbas (Brooklyn also had the nickname of the Robins, in honor of manager Robinson) loaded the bases in the top of the first inning. Ollie O’Mara doubled to right field to start things off. Hi Myers singled to left field and Benton walked Jake Daubert. It surely looked as if the Superbas were in for a big inning, but Rube came back, striking out Casey Stengel on a wicked curve. Zack Wheat stepped into the box, but the feared hitter could only manage a tap to Buck Herzog at short. Herzog threw home to catcher Tommy Clarke to force O’Mara. Myers for no apparent reason overran the bag at third and was thrown out by Clarke for the game’s first double play.

Benton settled down after the first inning. His counterpart was equally up to the task. That is not to say that he did not get himself into a pickle at times. Appleton walked seven batters in the game, but he was able to escape serious damage. In the first inning, Appleton walked Tommy Leach and Herzog to lead off the home half of the frame. But Red Killefer grounded into a double play and Heinie Groh grounded out to end the Reds threat.

The Reds continued to get baserunners into scoring position but were unable to produce results. Tommy Griffith led off the second inning with a double, but was stranded. Leach opened the third with a single and stole second base. But the inning proved fruitless and he ended up dying on the vine like Griffith.

The ballgame moved along. The pitchers were matching each other, scoreless inning after scoreless inning. Benton struck out 10 batters over the first nine innings. He whiffed Stengel, the Superbas’ cleanup hitter, three times. Stengel was replaced by John Hummel in the ninth inning and went to work as a bench jockey for the rest of the day.

The game was headed to extra innings. Just the day before, both teams had played to a 2-2 tie. That game was called at 6 o’clock after 14 innings on account of darkening skies. (Both starting pitchers, Brooklyn’s Wheezer Dell and Cincinnati’s Gene Dale, went the distance. When the game was called their efforts went for naught.) In today’s game, Both Benton and Appleton were getting solid defense behind them. Only one error was made by each team. Brooklyn catcher Lew McCarty was charged with an “E” for a bad throw in the ninth inning and Heinie Groh’s fumble of a grounder in the 12th was the lone miscue for the Reds.

Robinson exercised some interesting strategy during the game. In the ninth and 11th innings the Reds put a man on first base. In both instances, Ivey Wingo forced the runner at second base. Robinson then had the next two batters, Von Kolnitz and Ivy Olson, walked, loading the bases. That brought pitcher Benton to the dish, and both times he made an out.

The Superbas put together a rally in the top of the 14th inning. Daubert led off with a single to left field. He took third base when Hummel singled to right. But Wheat could not come through as he popped out to Herzog at shortstop. George Cutshaw was then given four wide ones to load the bases. McCarty then bounced into an inning-ending 5-4-3 twin killing.

The evening shadows began to creep onto the field as the Reds came up in the bottom of the 15th inning. Herzog led off with his first hit of the game, a single to left field. Killefer followed with a bunt to third base. The Superbas’ Gus Getz tried to head off Herzog at second base with his throw, but he was unsuccessful and Cincinnati had two men on with no outs. Groh flied out to Myers in center field for the first out. Griffith, with two hits already, stepped up to the plate. He got his third, driving Appleton’s offering to left field. Wheat gave chase, but the ball got past him and Herzog galloped home with the winning run.

For Benton, the 14 strikeouts were a career high. He reached 10 only one other time, against the Phillies on August 22, 1912. Benton was truly a workhorse pitcher, as he hurled over 10 innings 17 times in his career. The most innings he pitched in his career was 17, on July 16, 1920, when he was with the Giants. On July 16, 1920, Benton went 17 innings as he shut out the Pittsburgh Pirates, 7-0. (The game was scoreless for 16 innings until the Giants erupted for seven runs in the top of the 17th.)

The win did little to change the Reds’ fortunes. They finished seventh in 1915. Brooklyn finished third, 10 games back of Philadelphia. The Reds and Superbas split their season series, each winning 11 games. As for Ed Appleton, he pitched sparingly for Brooklyn in 1916. He spent the rest of his career in the minor leagues, mostly in leagues around the Southwest.

Rube Benton was involved in a bit of controversy later in the 1915 season. The Reds and Giants had a verbal agreement on a deal in which the Giants would purchase Benton. However, the Reds dealt Benton to the Pittsburgh Pirates. Benton pitched for the Pirates against the Cubs on August 17, but the National Commission ruled in the Giants’ favor and ordered the game thrown out. Benton pitched well in New York. In four full seasons with the Giants, he amassed a 57-44 record and a 2.81 ERA. He was a member of their pennant-winning team in 1917, and won one of their two victories in the World Series. He eventually returned to pitch for Cincinnati from 1923 to 1925. Benton had a career record of 150-144 with a 3.09 ERA. He rang up 950 strikeouts and issued 712 walks.

This article was published in "Cincinnati's Crosley Field: A Gem in the Queen City" (SABR, 2019), edited by Gregory H. Wolf. To read more articles from this book at the SABR Games Project, click here.