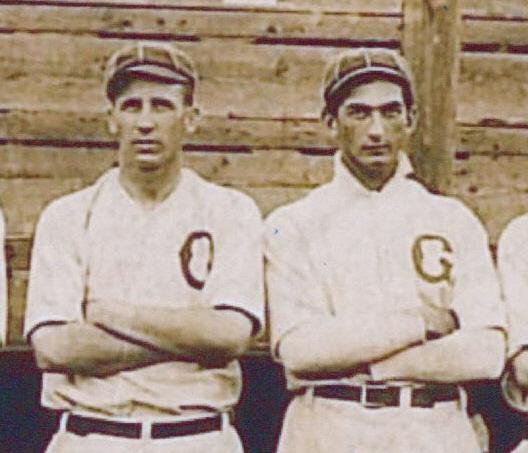 On June 11, 1908, the Greenville (South Carolina) Spinners won the first game of a three-game series against the Winston-Salem (North Carolina) Twins, before an estimated crowd of 800 at Winston-Salem’s Fairview Park.1 It was the inaugural season of the Class D Carolina Association, and the Spinners were in first place with a 23-12 record.

Overseeing the Spinners was 38-year-old playing manager Tommy Stouch; he “is one of the best managers to be found,” said the Charlotte (North Carolina) News.2 His best players were 21-year-old pitcher-outfielder Hyder Barr and 20-year-old outfielder Joe Jackson. Barr was a Tennessean; Jackson was a hometown boy from the Greenville area.

Stouch chose Barr as his starting pitcher in the second game of the series, on Friday, June 12. The Twins sent a newly acquired hurler named Walsh to the mound.3 In the first inning, Barr smashed a two-run homer off Walsh, “one of the longest hits ever made on the local diamond, the ball going over the right field fence some fifty feet above the wire netting.”4 After the home run, “Mr. Walsh was cussing everything in general.”5 In the fourth inning, Jackson slugged a solo homer over the same fence. Barr “made a face at him as he came in.”6 The boys had a friendly rivalry. Meanwhile, Barr struck out seven Twins through the first four innings, and Greenville led 3-0.

The Twins scored twice in the fifth inning, on three singles and a sacrifice fly. Barr led off the Greenville sixth with a single. Jackson followed with a triple and scored on a wild throw. Stouch singled and scored in the same inning. In the seventh, Barr’s single knocked in two more runs for Greenville. Not to be outdone, Jackson followed with a single.

There was no further scoring in the game. The final tally was Greenville 8, Winston-Salem 2. Barr struck out 10 batters. “His drop curves were a puzzle and the ball could not be knocked out of the diamond.”7 At the plate, Barr collected four hits and Jackson had three. “They were cheered time and again for their fine work”8 by the Winston-Salem crowd, although the fans “did not take up any collection.”9

Rom Lassiter of the Winston-Salem Journal had this to say about the game: “Ugh! Ugh! Huh! Barre. Jackson. And the whole darned Greenville team. Whew!” The Twin-City Daily Sentinel said, “That Greenville bunch is so blamed confident. Why they believe they could beat the Chicago White Sox.”10

Greenville finished the season in second place, a half-game behind the Greensboro (North Carolina) team. Jackson led the league with a .346 batting average. Barr was fourth among qualifiers with a .299 average and posted a 12-6 record as a pitcher. To put their batting averages in perspective, the league average was .218.11

Philadelphia Athletics manager Connie Mack acquired Barr and Jackson from Greenville, and the pair played for the Athletics after the Carolina season ended.

3 No first name was given for Walsh in newspaper accounts. He was possibly Leo Walsh, who pitched for the Montgomery (Alabama) Senators in 1907.