This article was written by Rich Puerzer 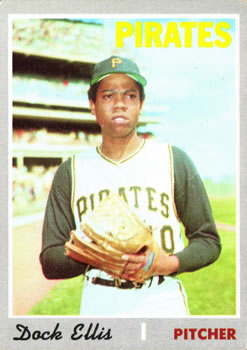 On June 12, 1970, Dock Ellis pitched one of the greatest games in the history of the Pittsburgh Pirates, throwing a no-hitter in San Diego against the Padres. It was only the fourth official no-hitter in Pirates history.1 Given what came to light years later, the claim that Ellis was under the influence of LSD when he threw the no-hitter, the game perhaps was one of the most unusual in the history of professional baseball.

The game was played on a Friday evening at San Diego Stadium, and was the first game of a twilight-night doubleheader. The Padres, managed by Preston Gomez, entered the game with a record of 26-35 and were in last place in the National League West Division, already 17½ games behind the first-place Cincinnati Reds. The Pirates, led by manager Danny Murtaugh, came into the game with a record of 28-29, holding onto second place in the National League East, 4½ games behind the Chicago Cubs. The right-handed Ellis was matched up against Padres lefty starter Dave Roberts. A light mist fell throughout the game. Dock Ellis was in his third season with the Pirates and the 25-year-old hurler was quickly becoming one of the best pitchers on the staff.

But throughout this game, Ellis was not terribly sharp. In the first inning, he walked two batters, but got out of the inning by striking out Padres right fielder Ollie Brown. In the fifth and sixth innings, he also walked two batters but was able to get the Padres out without allowing any baserunners to advance. He also had trouble holding runners on at first base, and allowed three steals of second for the Padres. In all, he walked eight batters, including three walks to Padres third baseman Steve Huntz. He also hit one batter, center fielder Ivan Murrell.

Although the Padres had very few hard-hit balls, Ellis relied on his defense quite a bit; they pulled off at least three tough defensive plays. In the second inning, center fielder Matty Alou made a running one-handed grab in right-center of Padres Chris Cannizzaro’s line drive. In the eighth inning, Alou made another running grab, this time of a line drive off of the bat of Padres cleanup hitter Nate Colbert. But the defensive gem of the game came in the bottom of the seventh inning when leadoff batter Ramon Webster, pinch-hitting for pitcher Dave Roberts, hit a ball sharply up the middle. Pirates second baseman Bill Mazeroski made a diving backhanded play on the ball, taking the base hit away.2 The ninth inning was one of Ellis’s smoothest: He got the Padres to go down 1-2-3, with the game ending on a strikeout looking of pinch-hitter Ed Spiezio. It was reported that Ellis threw about 150 pitches in the game, and the game was played in 2 hours and 13 minutes.3

Ellis and the Pirates eschewed the tradition of not speaking of the no-hitter on the bench as the game progressed. In the fourth inning, Ellis turned to Pirates rookie and reserve second baseman Dave Cash, who was sitting next to him on the bench, and said, “Hey, look, I’ve got a no-no going.” Cash then reminded Ellis at the end of every inning, “Remember, now, you’re still on the no-no.”4

The Pirates offense was kept in check for much of the game, managing only five hits and no walks. However, left fielder Willie Stargell belted two solo home runs, his 11th and 12th round-trippers of the season, one in the second inning to left field and the other in the seventh inning to right,to account for the only two runs scored in the game.5 Offensively, Ellis went 0-for-3, with two strikeouts and a groundout.

After the game the Pirates mobbed Ellis on the mound. However, as this was the first game of a doubleheader, the team had to prepare for the second game, putting a damper on an extended celebration. It was mentioned however, that Ellis was “particularly cooperative” with the sportswriters after the game, something that was not always the case for the sometimes combative pitcher.6 The Pirates lost the second game, 5-2. The split gave the Pirates had a record of 29-30, and they would go on to win 89 games and finish first in the National League East.

It was not until 1984 that Dock Ellis began to tell the public he had been under the influence of LSD when he threw the no-hitter. The explanation he gave was that he was at his home in Los Angeles on the day of the game, and mistakenly believed that the Pirates had an off-day. At around noon, he ingested LSD. At 1 P.M., his girlfriend read in the newspaper that the Pirates in fact did have a game that day in San Diego, and that Ellis was scheduled to pitch. Ellis got to the airport and flew from Los Angeles to San Diego, arriving at the park in time to pitch.7

In describing his experiences pitching in the game, Ellis said that as he pitched, it felt to him that the ball changed size throughout the game, that at times the batter looked like Richard Nixon or Jimi Hendrix wielding a guitar instead of a bat, and that he sometimes did not see the catcher as he pitched.8

After his baseball career ended in 1979, Ellis said he had always been under the influence of drugs, including amphetamines or “greenies,” or alcohol when he pitched. But he insisted that this was the only time he pitched while on LSD. After retiring as a player, Ellis entered drug treatment. He later became a drug counselor and remained sober for the rest of life. Ellis died in 2008 of cirrhosis of the liver. He is buried in Inglewood Park Cemetery in Inglewood, California. No No: A Dockumentary, a 2014 documentary film, provides an excellent and often moving overview of Ellis’s life, including, of course, his no-hit game.

1 David Finoli and Bill Ranier, The Pittsburgh Pirates Encyclopedia (New York: Sports Publishing, 2003), 623.  This does not include Harvey Haddix’s performance on May 26, 1959, in which he pitched 12 perfect innings, but ultimately lost the game by a score of 1-0 in 13 innings.