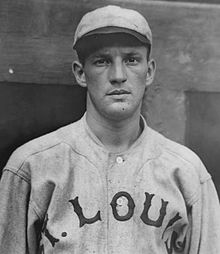 A Thursday afternoon Philadelphia crowd of 3,500 fans got their money’s worth by watching the longest game of the 1918 season, a 19-inning affair between the Phillies and the St. Louis Cardinals that ended in a tie. The 18-25 Phillies were in sixth place in the National League. The Cardinals were a half-game behind them at 17-25 and had been idle since beating the New York Giants on June 8.1 Neither team would finish the shortened season in a higher position.2 Exactly one month earlier, the two squads had also played a game that ended in a tie (3-3).

An unlikely hero in the game was a 20-year-old rookie for St. Louis named Cliff Heathcote. He was appearing in just the sixth game of his career, having been brought up in early June. Cardinals manager Jack Hendricks saw something in the Penn State product despite his .158 batting average (3-for-19), so he penciled the left-handed hitting Heathcote into the leadoff position against the Phillies.

Erskine Mayer (7-4) started for the Phillies. This was his first start of the season against the Cardinals. Red Ames, pitching in his 16th season,3 took the mound for the visitors. Despite a record of 4-4, Ames sported an earned-run average of only 1.32. He had pitched six complete games in his previous seven outings and had pitched at least seven innings in every start of the season to this point. In this game, however, he couldn’t record seven outs. The Phillies scored a run in the bottom of the first. In the bottom of the second, Fred Luderus blasted a grand slam as part of a five-run burst. Ames finished the inning and did not return.4 Bill Sherdel entered in the third and allowed two more Philadelphia runs in the fourth inning.

Mayer was “very, very good for three periods, and very, very bad for three more,” said the Philadelphia Inquirer.5 For the first three innings, Mayer retired the Cardinals in order. The Inquirer told its readers, “After being staked to a seven-run lead in the first four periods of play, [the Phillies] permitted the lowly Cards from St. Looey to rush up from behind and tie the score at eight runs each in the seventh inning.”6

According to the Inquirer, “Young Mr. Heathcote was a thorn on the side of Erskine Mayer.”7 In the fourth inning, the St. Louis rookie smashed a triple and then scored the Cardinals’ first run. An inning later, with two men on, he launched a ball over the wall in right field. Philadelphia’s Evening Public Ledger described the young rookie: “Swinging his bat like a swagger-stick, he wearily looked over the assortment of twisters and benders dished up by Erskine Mayer, selected one to his liking and lifted it out of the park for a home run.”8

The Cardinals scored three more times in the sixth, chasing Mayer. Brad Hogg came in from the bullpen, charged with protecting a one-run lead. In the top of the seventh, St. Louis’s Doug Baird singled per the Inquirer story and stole second base and then third. Phillies catcher Ed Burns made a wild throw to third baseman Milt Stock, and Baird trotted home with the game’s equalizer. The score at the end of regulation was 8-8.

As the game entered extra innings, the Cardinals had a few chances to break the tie. In the 10th, Gene Paulette doubled with one out and advanced to third on a groundout by Bobby Wallace. Hogg intentionally walked both Frank Snyder and Mike Gonzalez, loading the bases to face the pitcher Sherdell. Sherdell, a good contact hitter, bounced a grounder up the middle. Shortstop Dave Bancroft barely gloved the ball behind second base and “chucked the ball toward [second baseman Patsy] McGaffigan with the same motion with which he had fielded it.”9 McGaffigan caught the relay in his bare hand for the force out, preserving the tie game.

Heathcote doubled leading off the 11th inning. Baird sacrificed him to third and Walton Cruise struck out. Hogg again intentionally walked back-to-back batters (this time Rogers Hornsby and Paulette). Heathcote was thrown out at the plate on Wallace’s grounder and the game remained deadlocked. Heathcote singled later in the game (the exact inning is unknown),10 and this allowed him to achieve the rare event of hitting for the cycle, since “that’s all the various dimensions of hits there are in the game.”11 He also flashed his glove, catching deep fly balls and making a few shoestring catches; he was credited with five putouts in center field. Heathcote’s line for the game was 4-for-9 with two runs scored and three runs batted in, prompting the Evening Public Ledger to report, “Outside of his batting, fielding and base-running, Cliffie is a bum.” Heathcote continued his hot hitting and was 8-19 in the three-game series against Philadelphia; his batting average jumped to .310.

The Philadelphia hitters “amassed their tallies by viciously assaulting ancient Leon Ames,”12 yet their bats were then held hostage by the offerings of right-hander Lee Meadows and three southpaws, Sherdel, Jakie May, and Gene Packard. The quartet of relievers held the home team scoreless over the game’s final 15 innings. Darkness came and umpires Ernie Quigley and Pete Harrison called the game after 4½ hours of battle, with the final score 8-8. St. Louis banged out 20 hits to Philadelphia’s 14. (The Phillies managed only five hits in their last 10 sets of at-bats.) There were 16 walks (seven intentional) in the game, and the visitors made five errors. Burns made the lone Phillies miscue.

Heathcote accomplished hitting for the cycle in just his sixth major-league game. He became the first Cardinals player to hit for the cycle in the twentieth century and the fifth overall in franchise history.13 His accomplishment was the only cycle in 1918 (there were none in 1916 or 1917), and it came three years after Cincinnati’s Heinie Groh hit for the cycle on July 5, 1915. The next player to hit for the cycle after Heathcote was St. Louis Browns star George Sisler (August 8, 1920), more than two years later. Since many baseball historians mark 1920 as the beginning of the modern, higher-scoring era in baseball, it is possible to contend that Heathcote’s cycle was the last one accomplished in the lower-scoring Deadball Era.14

1 The Cardinals had no games scheduled between a doubleheader (at the New York Giants) on June 8 and the game against the Phillies on the 13th, nor were any games postponed or canceled.

3 Ames debuted with the New York Giants and pitched with them until he was traded to Cincinnati on May 22, 1913. He pitched there until July 24, 1915, when he was sold to the Cardinals.

10 Although box scores are available, play-by-play is not. The Cardinals got two hits in the 12th, one in the 13th, two more in the 17th, and one in the bottom of the 19th. A search through Philadelphia and St. Louis newspaper accounts of the game did not elaborate on when Heathcote hit his single, but we know it was after the double.