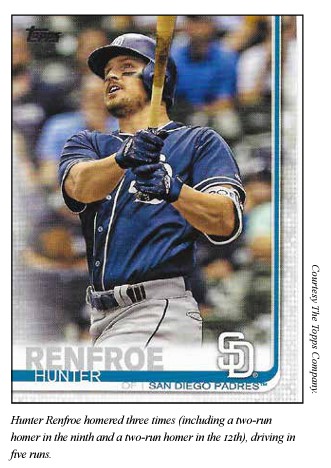 The thin Rocky Mountain air, the enlarged outfield dimensions, and the standard of low humidity have long made Coors Field a ballpark where the improbable regularly happens, especially with its run-scoring environment. While the home of the Colorado Rockies has hosted many incredible comebacks in its tenure, few were as unlikely as the one the San Diego Padres experienced on the evening of Friday, June 14, 2019.

The Padres were visiting Denver for the second game of a four-game weekend series. The Rockies captured the Thursday night game, 9-6. Colorado entered the Friday game with a 36-32 record, having battled back from a dreadful season start. Optimism was growing for the club, with the hometown fans hoping the team could parlay its current surge into a competition for a third straight playoff berth. As for the fourth-place Padres, they trailed their second-place counterparts by 3½ games, holding a 33-36 mark.

Rookie right-hander Cal Quantrill took the mound for the Padres. He was faced by 26-year-old righty Jeff Hoffman, a pitcher for whom the Rockies had high hopes but who struggled regularly with his command during his young career. True to form, Hoffman grooved a high fastball to Hunter Renfroe of the Padres in the second inning, and Renfroe deposited a majestic shot deep into the Padres bullpen in right-center field. However, Hoffman settled in and pitched five innings, giving up only the single run, along with three hits and two walks. Hoffman’s night was through after his 88-pitch outing.

Quantrill did not fare as well in his five innings of work. He gave up two runs in the third inning on left fielder David Dahl’s opposite-field homer to left field. Additionally, Quantrill was charged with two runs in the fifth inning. Right fielder Charlie Blackmon singled and shortstop Trevor Story doubled. Dahl and first baseman Daniel Murphy followed with productive outs, a groundout and sacrifice fly successively, to put the Rockies ahead 4-1 at the end of five innings. After both starting pitchers departed, the game was left to the efforts of the respective bullpens, who would struggle mightily on this evening.

While the Padres tallied twice in the sixth and once in the seventh, it was the Rockies who took control of the contest by scoring seven times in these two frames. A five-run sixth was highlighted by a three-run inside-the-park home run by Ian Desmond, who had entered the game on a double-switch, and a rally consisting of singles and Padres errors in the seventh, with Desmond earning another RBI on a single. The end of the seventh found the Rockies with a commanding 11-4 lead, and with – it seemed – just two innings to play.

The partisan crowd of 38,077 was dismayed by what followed. The Padres, beginning in the eighth inning, decimated the Rockies relief corps with 12 consecutive runs, tying the game in the ninth inning and seizing the lead and victory in the 12th. As they entered the eighth, the win expectancy for San Diego, according to Fangraphs, was a mere 0.3 percent.1 Their odds of victory did not significantly improve after they scored a run in the inning on a two-out double by Austin Hedges that brought home Hunter Renfroe.

The Rockies, feeling confident of the outcome of the game with a six-run ninth-inning lead, turned to left-hander Mike Dunn to finish the game. Dunn, however, was able to secure only one out while being charged with four earned runs. Fernando Tatis Jr., as he did so many times during his rookie campaign, jump-started the Padres offense with a single to left. After Josh Naylor struck out, Manny Machado singled, and both he and Tatis advanced one base on Dunn’s wild pitch. Eric Hosmer followed with a two-run single, and Hunter Renfroe clubbed his second home run of the night, this time to the left-field pavilion. Dunn’s night was finished as the Rockies opted to bring in their closer, right-hander Wade Davis.

Davis’s season had been a success thus far as he entered the game with a 2.55 ERA and eight saves. However, he was not able to hold down this victory for Colorado. With one out, Wil Myers and Ian Kinsler singled. Austin Hedges flied out, but pinch-hitter Manny Margot walked to load the bases. Then Tatis got his second hit of the inning, a solid single to center, and the game was tied. As the boos rained down in Coors Field, Davis managed to strike out Josh Naylor to end the inning.

The Rockies were retired one-two-three in the ninth and 10th, and managed only a single in the 11th. The Padres didn’t score in either the 10th or 11th, themselves also limited to an 11th-inning single.

The game remained tied at 11-11 until the 12th inning. By this time fireballing right-hander Jairo Diaz was on the mound for Colorado. The Padres pounded him for five extra-base hits in the inning, the big blow being the third home run of the game by Hunter Renfroe, each one off a different pitcher. The Rockies, competing with a depleted bullpen at this point, allowed Diaz to remain in the game and take the abuse. Padres batters poured across five runs.

The Rockies did manage to score in the bottom of the 12th on a solo home run by leadoff batter Charlie Blackmon, but Padres relief specialist Kirby Yates was able to close out the contest and a 16-12 Padres triumph 5 hours and 4 minutes after the first pitch of the game.

It is not often a major-league team scores 12 consecutive runs, and the postgame quotes from the Padres noted this fact. “Went from about as ugly as we could possibly play to as unbelievable as it could possibly be,” said manager Andy Green.2

Center fielder Wil Myers said, “I ain’t seen nothing like that.”3

Rockies manager Bud Black was more circumspect, simply sharing that the game was “a tough one … because it looked like we had it.”4

While the Padres completed their astounding Friday evening comeback, this four-game series of baseball was not over. In fact, the 16-12 Padres win was merely a part of a wild weekend in Denver, whose impact set the tone for the rest of the Rockies’ season.

The Padres ended the set with a split, losing the Saturday evening contest, 14-8, and triumphing on Sunday, 14-13. The series set the major-league record for the most runs scored in a four-game series, 92, surpassing the previous record of 88 set by the Phillies and Dodgers in 1929. The Rockies and Padres also nearly broke the mark for the most hits in a four-game series, falling two short at 131.5

Many traced the start of the downfall of the 2019 Rockies to the June 14 game and the entire series versus the Padres. After their Thursday night victory, the Rockies went 35-59 the rest of the way, with much criticism levied against a faltering bullpen – one that was devastated in the games against San Diego.

On an individual note, Rockies right fielder Charlie Blackmon clubbed 15 hits in the series, also a major-league record for a four-game series, four of which were counted from Friday night. In addition, Blackmon became the first player since Rafael Furcal in 2007 to record four hits in three consecutive games. Blackmon, however, had a difficult time enjoying his achievements when the weekend ended. “The last three games were five hours, four hours, five hours,” Blackmon said. “It’s just really hard to go out there, play that much baseball at altitude. To end up a split, it’s disappointing.”6

While the Rockies briefly rebounded from this grueling game and series, they cratered in July with a 6-19 record, their beleaguered bullpen being a key source of the struggle. The Rockies ended the 2019 season with a disappointing 71-91 record, well out of playoff contention. The Padres fared even worse, ending the campaign one game below the Rockies in the standings at 70-92, but with vivid memories of an amazing comeback on a Colorado night in June.

The author attended this contest, remaining in his seat the entire 5:04 of the game and outlasting all but a thousand or so of the patrons that night.

In addition to the sources cited in the Notes, the author accessed Baseball-Reference.com, MLB.com and Retrosheet.org

3 Nick Groke, “‘I’ve Never Seen Anything Like It.’ Looking Back at the Coors Field Series That Wrecked the Season,” The Athletic, theathletic.com/1212946/2019/09/16/ive-never-seen-anything-like-it-looking-back-at-the-coors-field-series-that-wrecked-the-rockies-season/.