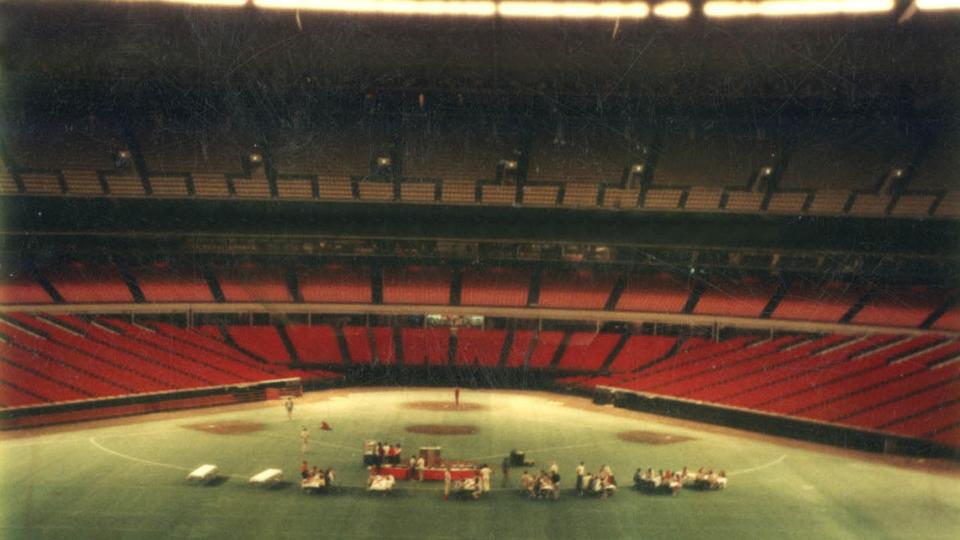 As rain poured outside in Houston on June 15, 1976, forcing the first rainout in the Astrodome’s history, the Houston Astros served dinner to players and team employees on the field behind second base. (COURTESY OF THE HOUSTON ASTROS)

A rainout in the Astrodome? How is that possible? It’s domed, protected from the elements. The Houston Astros don’t even have the traditional rain check printed on their tickets! Yet on Tuesday, June 15, 1976, the supposedly impossible happened — a game between the Astros and the Pittsburgh Pirates was postponed because of rain.

The Astros entered the game in fourth place with a 29-33 record, 10 games behind the Cincinnati Reds. Pittsburgh had a 33-25 record but because of a red-hot start by the Philadelphia Phillies, the Pirates were 6½ games out.

The day of the game, a powerful thunderstorm had developed over the Houston area, caused by very humid, unstable atmospheric conditions along the Gulf Coast combined with a cold front that extended from the Gulf through central Texas. The storm hit shortly before noon and after it subsided seven hours later, downtown Houston had received 7.48 inches of rain. The worst flooding occurred around Market Street, the East Loop, Denver Harbor, and Reveille. The heaviest recorded rainfall was 13.06 inches at the Houston Ship Channel near 75th Street. Heavy flooding occurred around the Texas Medical Center, just north of the Astrodome, where 10.47 inches of rain was unofficially recorded.

As Astros team historian Mike Acosta described it, “It was like a tropical storm. It was raining hard, and it just kept coming down. It got to the point where the streets around the Astrodome were flooded and impassable. Fans couldn’t get to the stadium. Neither could Astrodome workers. Remember, the Astrodome floor was 45 feet below ground level. So the lower ramps and entries were flooded also.”1

Astros general manager Tal Smith recalled, “It was an absolute downpour, there was flooding all over, and people were just marooned. Houston has a low water table; we’re not that far above ground, a marshy area, and when we get torrential downpours, we have flooding.”2

How would this deluge affect the game scheduled for that night? Smith said, “At the time, it was quite a story. Obviously we could have played, but we would have done so without any umpires, without any fans. The players were there, and our offices were in the Dome, but nobody else could get there. The umpires stayed at the Shamrock Hotel, which was not that far from the Dome, maybe two miles at the most. The [crew] chief called me about 4 o’clock that afternoon and said they tried to get there and just couldn’t get out, and by that time we had reports from all around the stadium about the roads being impassable and so on.”3 Later it was reported that the umpires had made a determined effort to arrive for the game, but their cars had stalled in high water and they had to wade back to their hotel.

How did the players manage to arrive for the game without major issues? Acosta said, “Players started arriving around 1 P.M., when it was still possible to get to the stadium. They had to be dressed by 3:00 or 3:30 P.M. The Pirates team bus made it through, as did the Astros coming by themselves.”4

Indeed, the players were there, but their journey, even before the storm reached its worst stage, was not easy.

Astros pitcher Paul Siebert recalled thinking that the game would be played as he rode in. “My girlfriend dropped me off,” he said. “She came back, drove through water over the hood. My 1975 Grand Prix was in the shop for a week drying out.”5

It was a special day for Doc Medich of the Pirates. “June 16, 1976, was our seventh wedding anniversary. I was supposed to pitch. I spent the afternoon reading a Robert Ludlum book in my hotel room and remember watching it rain, and rain, and rain. It rained hard for a long time. I recall the rain lasting at least seven hours. I mean a very hard, steady rain. About 2:00 P.M., I was beginning to wonder if the game might even be called even though it was played inside. Houston is very flat, and the water doesn’t run off very fast. Around 3 o’clock, I took a cab over to the Dome, it might have been with Tommy Helms. When we got there, there were a few of our players and coaches already there.”6

Pirates pitcher Jerry Reuss recalled, “The Pirates stayed at the Shamrock Hotel that year and the bus ride to the Dome was normally 10 or 15 minutes. On the bus ride to the park, I noticed the canals that collect the runoff from the frequent Houston rainstorms were unusually high and in some cases, were spilling over their banks and into the adjacent streets. I lived in Houston for two years and never saw that happen. The trip from the hotel to the Dome that day was around a half-hour and the storm was the topic of conversation in the clubhouse. Still, we dressed and it was business as usual during our time on the field.”7

Shirley Virdon, the wife of Astros manager Bill Virdon, had an experience she’d always remember. “I remember it well! My daughter and I were stranded in our car on top of the interstate at the Kirby exit to the Dome. I sat in the car 5½ hours waiting for the rain to subside, and the water to go away so I could get off the freeway; our daughter waded over to the Dome.”8

The players inside the Astrodome had no knowledge of what was going on outside, or whether the game would be played or postponed. Bill Virdon remembered, “When we first got on the field we thought we would play.”9 Larry Dierker said he “didn’t know,”10 but Astros infielder Rob Andrews said, “We did have our doubts when water began to cascade over the outfield scoreboard.”11 Houston pitcher Mike Cosgrove “couldn’t believe the water outside, cars were under water!”12

As game time approached, a decision had to be made. Tal Smith, assessing the situation, made the logical decision to postpone the game; the main reason was concern for fans and employees, and not putting them in harm’s way. The decision was announced around 5:00 P.M., while the rain was still heavy and showing no sign of subsiding. The announcement of the postponement was the lead story on the local TV news.

Smith thought it was an easy decision. “Nobody could get there, and I just thought the intelligent thing to do was to call the game. There was some concern by some of our other people, some of my management associates, particularly in the nonbaseball side, that this would make us look bad. I said, to the contrary, I think it’s a major news story, it’s nothing we’ve done, that it’s a question of the elements, the weather and so on. It was the responsible, prudent thing to do. On that day, June 15, it was the trading deadline, and Joe Brown was the general manager of the Pittsburgh club at the time. I conferred with him, told him what I was going to do, which was fine.”13

An Astros spokesman told the press, “It wasn’t exactly a rain-out-it was a rain-in.”14

About 20 fans did make it to the game, and they became dinner guests of the Astros in a stadium cafeteria. The players were also treated to a meal, but rather than a cafeteria setting, they ate on the field. According to Medich, “The Astros brought food down onto the field and served it on tables out by second base.”15 Virdon said the players from both teams “were happy to be fed at that time.”16 Cosgrove thought it was “great — a great gesture by whoever put it on.”17

None of the players could recall what was on the menu that evening. The Houston Post said that they were catered steak dinners, and Paul Siebert remarked, “I don’t remember, more drinks than food.”18 Mike Acosta, the team historian, said, “Concession workers set up a buffet and tables behind second base, and both teams ate dinner on the field together. The players were in uniforms, but some of them were wearing shower flip-flops on their feet. The Astrodome staff ate with the players as well.”19 Jerry Reuss noted, “Since the Astros players and office personnel were in the same predicament, a decision was made to make everyone as comfortable as possible. A makeshift kitchen was set up just beyond the infield, picnic tables were placed nearby as personnel from both clubs were invited to the impromptu meal.”20

After the meal, a few of the Astros, including Larry Dierker, decided to climb to the top of the Dome and crawl on the catwalk.

Tal Smith’s decision saved many fans from a harrowing experience attempting to get to the game, but there was one last hurdle to conquer. How did the people already at the Astrodome get safely home?

Paul Siebert recalled, “We left late. My car didn’t start. We got a ride with Ed Herrmann.”21

Doc Medich’s trip home began around 8:00 P.M. “I guess the rain slacked off enough for us to get a bus back to the hotel. The streets were still flooded and the bus had to go very slow through the streets.”22 Bill Virdon was able to get home in his car, but his wife, Shirley, had to abandon hers on a bridge near the ballpark. As the evening grew later, the danger decreased. Dierker recalled leaving at around 10:00, and Roger Metzger, around midnight. Rob Andrews and Mike Cosgrove chose to ride home in the morning, after spending the night in the Astrodome in a luxury suite sleeping while the waters subsided.

Even on the next morning things were still far from normal. “The drive home was surreal,” said Andrews. “No one was on the roads. As I got on the interstate by the Dome I had to weave through abandoned cars left right where they stalled the night before. I couldn’t shake the feeling I was in some kind of world-ending disaster flick.”23

Tal Smith recalled another rain adventure that happened to him in 2004. “Driving home during one of these torrential downpours, I flooded my car out. Sometimes you just have no chance. You’re able to drive, and all of a sudden you run into a situation where there’s massive water that’s risen so rapidly, there’s no place to go.”24