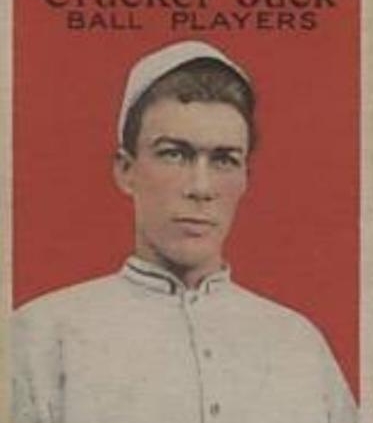 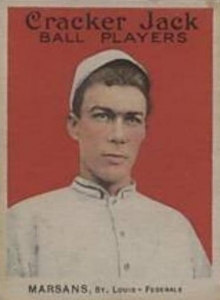 On Tuesday, June 16, 1914, the St. Louis Terriers welcomed the visiting Brooklyn Tip-Tops for the first of a four-game series. After 55 games, the Terriers sat in seventh place in the Federal League, a few percentage points ahead of cellar-dwelling Pittsburgh. The Tip-Tops occupied fifth place, three games under .500.

The St. Louis nine was sometimes referred to as the Miners in honor of their manager, Mordecai Brown, who sported the nickname Miner as well as the more familiar Three Finger. Brown, who had carved a Hall of Fame niche for himself during his nine years with the Chicago Cubs, was making his first assay at managing, but also kept his playing career current, inserting himself into 26 games during his tenure in the Gateway City.

Rookie pitcher Dave Davenport, a 24-year-old Louisianan, was starting for the first time as a Terrier. He had begun the season with the National League Cincinnati Reds, going 2-2 in six starts. His last appearance with the Reds had been a shaky 1⅓ innings of relief against the Phillies on the previous Friday, giving up three earned runs in a 5-1 loss. The tall (6-feet-6) righty then decided to follow his fellow former Red Armando Marsans in jumping to the St. Louis Feds.

The Cuban Marsans had been at odds with Cinci manager Buck Herzog since at least spring training, had been suspended, and had demanded a trade.1 Indeed, Herzog tried to shop him to the NL Brooklyns in May when Marsans “was in one of his sulks,” but Wilbert Robinson would not take the bait.2 Marsans took matters into his own hands, meeting with Terriers officials and grabbing their offer of a three-year, $21,000 contract.3 Davenport’s jump seems to have been unexpected,4 although he, like Marsans, had been agitating Reds officials for a new contract with no success. His new Federal League contract was reportedly for $18,000 over three years.5

All of which brought forth the usual recriminations from the jilted Cincinnatians: “Senor Marsans and the Texas Kid are about as popular in Redland now as a couple of polecats in a barnyard.”6

Like Miner Brown, Brooklyn manager Bill Bradley had a substantial, though less spectacular, playing career behind him, having manned third base for the better part of Cleveland’s first 10 years in the American League. To face the Tip-Tops, he sent his best pitcher, Tom Seaton, to the mound. After leading NL hurlers in victories and strikeouts in 1913, Seaton would also place in the top five among FL pitchers in those categories in 1914.

The bulk of the scoring for both teams came in the opening and closing frames: All but four of the game’s 25 runs were scored in the first and the 12th innings.

Bradley’s troops gave Davenport a rude welcome to the FL in the first frame. With one out and two men on, 37-year-old outfielder Danny Murphy stepped in. Murphy, who actually qualified as a veteran of the nineteenth century thanks to 20-odd games with the NL Giants in 1900, was a consistent slugger and key player for Connie Mack during the Philadelphia Athletics’ greatest years. appearing on five pennant winners. His homer to right — which would prove to be the final round-tripper of his major-league career — gave the Brookfeds a 3-0 advantage.

In their half of the first, the Terriers sent seven men to the plate. By virtue of three singles, some shaky Brooklyn fielding, and a successful double steal, they knotted the score with three runs. They might have had more but a second double-steal attempt ended with rookie Al Boucher run down between third and home.

Both teams then went quiet for five innings before the Tip-Tops pulled ahead with two runs off Davenport in the seventh. Down to their potential final at-bat, the Terriers eked out a pair of tallies in the bottom of the ninth to tie it up.

Brown himself relieved his new moundsman as extra innings commenced. Davenport had allowed five runs, all earned, while surrendering eight hits and striking out eight; a mixed bag of a debut as a Fed Leaguer. The legendary Three Finger stymied the Easterners for two innings, giving up a solitary hit and no walks.

On the other side of the ledger, Bradley stuck with his ace, and Seaton rewarded his confidence, keeping St. Louis off the board in the 10th and 11th. Then the dam broke.

Pitcher Seaton, no doubt enjoying the offensive barrage more than anyone in Handlan’s Park at this point, helped his own cause with a blast over the fence that drove Gagnier across the plate before him. With the bases newly empty, George Anderson stroked the seventh hit of the inning and moved into scoring position on a wild pitch by Brown. Making his second plate appearance of the inning, Cooper doubled Anderson home. When Griggs finally struck out,7 the score stood at 12-5 in Brooklyn’s favor.

Staring into the face of a seven-run extra-inning deficit seems not to have unnerved the Terriers in the least. The deluge began immediately, with a leadoff homer from Jack Tobin, who would later become a perennial .300 hitter with the AL St. Louis Browns. After an infield out, three consecutive singles off Seaton loaded the bases. Al Bridwell’s short hit to left field was mishandled by Anderson, his second error of the day, and Fred Kommers scored from third. With bases still full, a walk to catcher Mike Simon forced in another run, and was the signal for Bradley to yank Seaton.

Relieving him was Byron Houck, who had begun the season with the AL Athletics but joined the Brookfeds in May after being released by Connie Mack. Brown, with his team now at a four-run deficit, pulled himself out of the game, sending Grover Hartley in to pinch-hit. Hartley came through with a single, scoring Boucher. Marsans likewise singled home a run, and Tobin did the same with his second hit of the inning, closing the gap to one run. Ward Miller, responsible for the lone Terrier out, then walked, forcing the tying run across the plate and driving Houck from the mound. Bradley brought in southpaw Rudy Sommers, making just his ninth hill appearance of the season.

After this exhilarating 13-12 victory, Terriers fans watched their team drop three straight to Brooklyn, and had very little to cheer about for the remainder of the season, as the club sank to the bottom of the FL standings. Mordecai Brown’s managerial career went into the tank with the team; after a 7-4 complete-game loss August 21, he was replaced as pilot by Fielder Jones, and by the end of the month St. Louis was ready to release him outright. On September 1 his contract was picked up by none other than the Tip-Tops. On September 11, in his second start for the Brookfeds, he faced off against Davenport and the Terriers, and took the loss against his former underlings, 6-5.

6 “Two Red Jumpers,” Sporting Life, June 27, 1914: 7. While the Reds seemed to simply give up on Davenport, the club filed a lawsuit in the Marsans matter and won an injunction that put the Cuban out of action after only nine games with the Terriers. He did return to the St. Louis Feds in 1915.

7 “Griggs purposely fanned.” So said the St. Louis Post-Dispatch (June 17, 1914: 9), apparently on the premise that runs sufficient for victory had been secured, and that delaying the end of the game further was unnecessary and potentially problematic for the team in the lead. If this was true, it was obviously a disastrous piece of strategy.