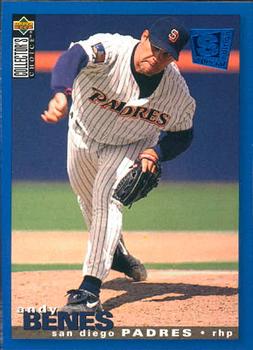 The San Diego Padres (21-24) were paying a visit to the Pittsburgh Pirates (17-27). The teams were holding down last place in their respective divisions: San Diego 5½ games back of Colorado in the NL West, and Pittsburgh 11½ games back of Cincinnati in the NL Central. The 15,737 fans attending the game may not have seen great teams, but they did see some great players: Seven All-Stars including two future members of the National Baseball Hall of Fame played in this game.1

Esteban Loaiza (2-2, 5.62 ERA) took the mound for the Pirates. This was only his 11th major-league appearance; he had debuted on April 29. He pitched a quick and effective first inning. Steve Finley popped out, then Jody Reed and Tony Gwynn grounded out.

Andy Benes (0-5, 4.40 ERA) was the starter for the Padres. Perhaps he was a little distracted when he took the mound: He had learned earlier that day that he had lost his salary arbitration case, so would earn $3.4 million in 1995 rather than the $4.4 million he had requested.2 Perhaps the arbitrator noticed that although he had led the league in strikeouts (189) and K/9 (9.9) in 1994 and garnered some MVP votes, he also compiled a 6-14 record, leading the league in losses.3 Whatever the reason, the inning was a disaster. Condensed, it read: reached on error, stolen base, reached on error, popout, run-scoring groundout, two-run homer, walk, and (finally) a caught-stealing to end the inning with the score 3-0, Pirates. All the runs were unearned, although one of the errors was by Benes himself.

Loaiza’s second inning was nothing like the first. Ken Caminiti opened the half-inning by singling to center and ended it by striking out looking. Between those two at-bats the Padres scored five runs on two doubles, two more singles, two walks, a steal, a sacrifice by Benes, and a passed ball. The passed ball scored two runs: Catcher Angelo Encarnación’s inexperience may have been a contributing factor.4 Loaiza threw 33 pitches in the inning. At this point it was looking like a long evening at the ballpark. Loaiza’s manager, Jim Leyland, understood his young pitcher’s problems: “He had nothing, and he made some bad pitches. But you’ll go through that with a young pitcher. You’ll get a couple of good ones, and a couple of bad ones.”5

Benes, other the other hand, seemed to be settling down in the bottom of the second. Although he allowed a leadoff single to Carlos García, Padres catcher Brian Johnson caught García stealing second. Encarnación struck out looking and Loaiza grounded out to end the inning with the score 5-3, Padres.

The Padres added one to their lead when Eddie Williams took the first pitch of the third inning and deposited it into the stands. On the next pitch Melvin Nieves reached on an error by the second baseman. He then advanced to second on Johnson’s single – on the next pitch. Loaiza had allowed three baserunners on three pitches. Apparently that was enough for Padres manager Bruce Bochy, who called for Rick White. White (2.66 ERA) was a sometimes starter, sometimes reliever, coming off a successful six-inning outing five days earlier. This outing would not be considered “successful” by any definition. He started by walking the next three batters which resulted in two runs. After Reed popped out for the first out of the inning, Gwynn cleared the bases with a double, scoring three more runs. Caminiti grounded out for the second out, then White walked Williams (who had started the inning with the homer). White finally got the third out by striking out Nieves. With that six-run inning the score was now 11-3 in favor of the Padres.

The Padres padded their lead in the top of the fifth. Finley doubled to lead off the inning. After two groundouts, Finley was on third, allowing him to score on a wild pitch. Caminiti flied out to end the inning with the score 12-3, Padres. This also ended White’s outing, and increased his ERA to 3.86.6

Benes continued pitching effectively, working another 1-2-3 bottom of the fifth inning on only 13 pitches.

Mike Dyer took over the pitching for the Pirates in the top of the sixth, allowing only a single. The Pirates got one back in the bottom of the frame on Al Martin’s home run, bringing the score to the final 12-4, Padres. That ended Benes’s day at 96 pitches. He lowered his ERA slightly to 4.14 since three of the four runs he allowed were unearned. He finally had a win on his record for 1995 – his previous win had been a complete-game shutout of the Mets the previous July 3, almost a year earlier. Although his ERA increased to 4.76 by year-end, he did finish the year with a winning record of 11-9, although seven of those wins were with the Seattle Mariners.7

The seventh inning was over quickly as neither Dyer nor new Padres pitcher Willie Blair allowed a baserunner. Dyer allowed a single to Phil Clark in the top of the eighth but he was erased on a double play. The bottom of the eighth was another 1-2-3 inning for Blair.

Nieves opened the top of the ninth with a triple off new Pirates pitcher Jim Gott’s first pitch, but he was left there after two groundouts and a popout.8 Notwithstanding the score, the Padres called on their closer, Trevor Hoffman, to pitch the bottom of the ninth.9 The Pirates went quietly on a fly out and two infield groundouts.

The victory moved the Padres to third place in the NL West, which was where they ended the season, eight games back of the Dodgers. The Pirates stayed in last place, ending their season 27 games behind Cincinnati.

3 He had ended the previous season with five consecutive losses, so he was also hoping to end his personal 10-game losing streak.

4 Encarnación was playing in only his 11th major-league game at catcher.

7 He was traded to the Mariners on July 31 with Greg Keagle for Ron Villone and Marc Newfield.

8 Gott was less than two months from the end of a solid major-league career. He had been the Dodgers’ set-up man and closer through 1994, but his 8.76 ERA coming into this game was an indication that his career was reaching the end. August 3, 1995, was his final major-league appearance.

9 Hoffman’s All-Star and Hall of Fame career was just getting started. Certainly his 3.88 ERA for his third year with the Padres was not indicative of the great years to come, although he did end the year with 31 saves.