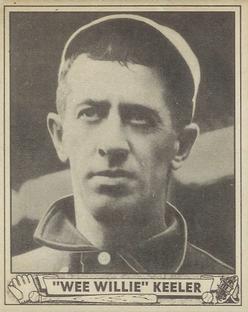 Before Joe DiMaggio had his 56-game hitting streak in 1941, the major-league record for consecutive games with a base hit was the streak of 42 consecutive games achieved by Bill Dahlen of the Chicago Colts in 1894.

As the 1897 season began, the National League’s Baltimore Orioles had just completed their third straight pennant-winning season. Prospects looked good for a repeat in 1897 with players like Hughie Jennings , John McGraw , Joe Kelley , and Wilbert Robinson returning for another shot at a pennant. Also returning to Baltimore for 1897 was the diminutive outfielder William Henry Keeler or, as he was better known, Wee Willie.

Keeler began as he so often stated, “hitting ’em where they ain’t” in the first game of the 1897 season, a 10-5 victory over the Boston Beaneaters.1 Through an eight-game homestand, Keeler got a least one hit in each game. Then, through a 25-game road trip in which the team visited nine of the other 11 National League cities, Keeler continued his streak. After the road trip Keeler kept right on hitting, passing Cal McVey (1876) and Dusty Miller (1895-1896), both of whom had hit in 30 straight games. Jimmy Wolf was the next name erased from the record books when Keeler crossed his mark of 31 straight games with a hit off the record books.

With a hit in his 37th consecutive game, Keeler passed Gene DeMontreville , who in 1896-97 hit in 36 straight games. After he broke Dahlen’s record of 42 games with a hit, every game after that raised the number in the record book.

The visiting Pirates batted first, with Mike Smith grounding out to shortstop Hughie Jennings.2 Second baseman Dick Padden missed the first two pitches from the Orioles’ Joe Corbett (the younger brother of heavyweight boxing champion Jim Corbett), and then hit the next pitch over the fence for a home run.3 Harry Davis and Steve Brodie singled, with Davis taking third on Brodie’s hit. Patsy Donovan ’s infield out scored Davis. Brodie was out on an attempted steal of home and the half-inning ended with the Pirates leading 2-0.

For the Orioles, McGraw led off the first with a double but was out when a ball hit by Keeler struck him.4 Jennings walked, then Keeler went to third on Jack Doyle ’s force-out grounder.5 Keeler then stole home and the first inning came to an end with the Pirates on top 2-1.

The second inning was scoreless. In the Pittsburgh third, starting pitcher Pink Hawley led off with a single, Mike Smith walked, and Padden was hit by a pitch to load the bases. Davis hit a long fly ball to Tom O’Brien in left field, scoring Hawley and giving Pittsburgh a 3-1 lead.

In the bottom of the third inning, Orioles catcher Frank Bowerman and pitcher Corbett singled, putting runners at first and third. Corbett stole second and McGraw’s second hit of the game scored both runners. McGraw was thrown out trying to steal third base. With the bases empty, Keeler doubled to center field and scored on a two-out triple by Doyle to give the Orioles a 4-3 lead.

Pittsburgh tied the game, 4-4, in the top of the fourth but the Orioles took the lead for good in the bottom of the inning. O’Brien, Joe Quinn , and Bowerman singled. Corbett doubled and McGraw reached on an error by Pirates catcher Joe Sugden . Keeler then tripled and Jennings singled. All this – six runs scored – happened with nobody out, and it gave the Orioles a 10-4 lead.6 The Orioles weren’t done. Jennings stole second base and went to third after tagging up on a foul out. He scored the Orioles’ seventh run of the inning on a long fly ball and Baltimore was now in command of the game, 11-4.

Pittsburgh got four hits in the sixth inning but just one run.7 In the Pirates’ eighth, singles by Donovan and shortstop Bones Ely combined with an out by Sugden gave Baltimore another run to make the score 11-6.

The Pirates rallied for three runs in their ninth inning, beginning with a walk to outfielder Mike Smith. Padden doubled and Davis’s fly out scored Smith. Brodie singled and went to second on an out by Donovan. Ely’s fourth single of the day scored Padden and Brodie to make the final score Baltimore 11, Pittsburgh 9.

The win gave the Orioles a two-game lead over the second-place Beaneaters. Pittsburgh was led by Ely’s four singles and Donovan’s three hits, which included a double.8 Keeler, Bowerman, and Corbett each had three of the Orioles’ 16 hits. “The Pirates slugged the ball yesterday as they have not done any other time this season,” a Pittsburgh newspaper observed.9 They made 16 hits and totaled 21 bases and yet could not win.10

Later in the season, the pennant race came down to two teams, the Orioles and the Beaneaters. The Beaneaters prevailed in the race and ended up the National League champions by two games over the Orioles.

Keeler’s hitting streak of games ended at 44 in the Orioles’ next game, a 7-1 loss to the Pirates, and he held the record until Joe DiMaggio bettered the mark, hitting in 56 games in 1941. Since DiMaggio, the only player to come close to DiMaggio, and for that matter Keeler’s 44 were Pete Rose , who tied Keeler in 1978, and Paul Molitor , who hit in 39 straight games in 1987.

In addition to the game story and box scores cited in the Notes, the author consulted the Baseball-Reference.com and Retrosheet.org websites.