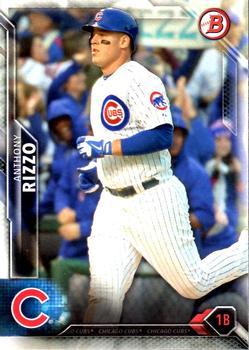 Wearing home pinstripes with powder blue logos and graphite caps, the Cubs defeated the Pirates for the 500th time at Wrigley Field in front of 41,024 fans and before a national television audience on Father’s Day 2016.1 The broadcasting crew of ESPN’s Sunday Night Baseball (Dan Shulman, Aaron Boone, and Jessica Mendoza) called the game from the right-field bleachers and sang the seventh-inning stretch in Friendly Confines fashion.

On the field, the game featured several noteworthy performances.2 Anthony Rizzo, Jason Heyward, and Starling Marte, three of 2016’s National League Gold Glove winners, made significant contributions in the field, at the plate, and on the bases. The game saw home runs by the 2016 National League Championship Series MVP, Javier Baez; the 2016 MVP, Kris Bryant; and 2016’s NL Silver Slugger at first base, Anthony Rizzo.

Pitching in his second full season of major-league duty, Cubs starter Kyle Hendricks — who would later start Game Seven of the World Series, finish third in the Cy Young Award voting, win the Player’s Choice NL Outstanding Pitcher Award, and lead the NL in ERA (2.13) — struck out a career-high 12 batters.

The game also featured firsts by both teams’ rookie catchers: The Pirates’ Jacob Stallings made his major-league debut (with his father in the stands), while Cubs rookie Willson Contreras, who had debuted two days earlier as a ninth-inning defensive replacement, hit his first major-league home run in his first at-bat (becoming the first Cubs pinch-hitter to accomplish the feat),3 joining Starling Marte and teammate Jason Heyward, who had both homered in their first at-bats in 2012 and 2010, respectively.4 Rarer still, Contreras’s round-tripper came on the first pitch, something only 27 other major-leaguers (including Marte) have ever done.5

By the end of the night, the Cubs’ winning percentage had crossed the .700 mark, albeit for the last time that season and, although Cubs fans were still holding their breath, it appeared that the loveable losers were solidifying their position as the best Cubs team since 1910.

Hendricks, the Cubs right-handed starter, acquired in the 2012 deal that sent Ryan Dempster to Texas, worked a quick first inning, throwing 10 pitches and earning his first two strikeouts.6 In the bottom of the frame, Cubs batters faced a Pirates rookie, Jameson Taillon, who in his last start (on June 14) had picked up his first major-league win, pitching eight scoreless innings, walking one, and striking out five in his defeat of the Mets’ Jacob deGrom at Citi Field.7 The Cubs scored one in the bottom of the first, on Rizzo’s line-drive RBI single over the shortstop. Taillon managed to get fly-ball outs from Ben Zobrist and Miguel Montero, but not before throwing 33 pitches in the opening frame.

In the Pirates’ second inning, Marte singled and stole second base, but despite Josh Harrison’s single, Hendricks yielded no runs, striking out the other three batters he faced, pushing his total to five after two innings. In the bottom half, the Cubs took a 2-0 lead on Baez’s sixth home run of the year.

By the end of the third, the Cubs led 4-0 after Hendricks struck out Andrew McCutchen for the second time (Hendricks’ seventh K), followed in the bottom half by back-to-back homers from Bryant and Rizzo for the second day in a row. Taillon’s pitch count had climbed to 76 and the Cubs’ win probability stood at 90 percent8 before Marte and Jung Ho Kang led off the Pirates fourth with Hendricks’ eighth and ninth strikeouts. After Harrison’s two-out home run and Jordy Mercer’s single, rookie Stallings flied out to deep right field to end the Pittsburgh threat.

The score remained 4-1 through the fifth with Hendricks striking out two more, including McCutchen for the third time. In the top of the sixth, the Pirates threatened again. A single by Kang and an error by third baseman Baez put runners at first and third with two outs. Stallings worked a nine-pitch at-bat, driving up Hendricks’ pitch count beyond the century mark, but he eventually struck out swinging for his second time, giving Hendricks his career-high 12th strikeout.

In the bottom of the sixth, after two quick outs by Pirates reliever A.J. Schugel, Baez singled past third. With a runner on and the pitcher’s spot due up, manager Joe Maddon called for a pinch-hitter. As the Wrigley faithful remained standing in tribute to Hendricks, Contreras strode to the box and squared up the first pitch — a center-of-the-plate, belt-high changeup — driving it into the first row of the bleachers above the center-field ivy. The crowd roared as the 24-year-old Venezuelan rounded the bases and emerged from the dugout for a curtain call.

But the Pirates didn’t surrender. Rallying against the Cubs’ bullpen in the seventh, Marte batted in two runs with a two-out triple and scored on Kang’s single, making it a 6-4 contest. After the seventh-inning stretch, the Cubs tallied four more runs, including Rizzo’s RBI single and Addison Russell’s two-run homer.

The score was 10-4 in the top of the ninth when pinch-hitter David Freese led off with a line-drive double to right field and scored on McCutchen’s one-out single, cutting the Cubs’ lead to five runs. When Marte singled, Maddon reluctantly called on the bullpen. Pedro Strop coaxed a groundout from Kang and struck out Harrison swinging to end the game, completing the three-game sweep of third-place Pittsburgh.

Afterward, Maddon extolled Hendricks’ performance: “Great location. Great movement. Kept repeating his delivery. Nice plays, defensively. Pittsburgh kept coming after us hard. … They made us use Stropey in the ninth, there, but Kyle was really, really good.”9

Four of the Pirates batters finished the night with multihit games. Marte, who missed the first half of the next season due to a PED suspension,10 went 3-for-5 with a triple and two RBIs, a stolen base, and a run scored. “‘Whatever you did to Marte,’” manager Clint Hurdle later admitted he told the trainer, “do it to everybody.’”11 In the weeks that followed, the Pirates would move up to second place and cut the Cubs’ Central Division lead in half, but by August the North Siders were dominating again.

Having struck out multiple batters in each of his first five innings, Hendricks told reporters, “I think we are [the best team in baseball] right now.”12

By the end of that season, they were. The Cubs’ Father’s Day performance foreshadowed their historic and long-awaited World Series championship. They came. They saw. They “tr[ied] not to suck.”13

My wife couldn’t have given us a better present. On Saturday I drove from Georgia to Mississippi to get Dad, and early on Father’s Day, he and I were on the road to Chicago to see our first game at Wrigley. For more than two decades, we’d been talking about going, but in 2016 we finally went. We couldn’t have picked a better game or a better year.

13 Tony Andracki, “How ‘Try Not to Suck’ Became the Rallying Cry for Joe Maddon and the 2016 Cubs,” NBC Sports, September 12, 2016. nbcsports.com/chicago/chicago-cubs/how-try-not-suck-became-rallying-cry-joe-maddon-and-2016-cubs.