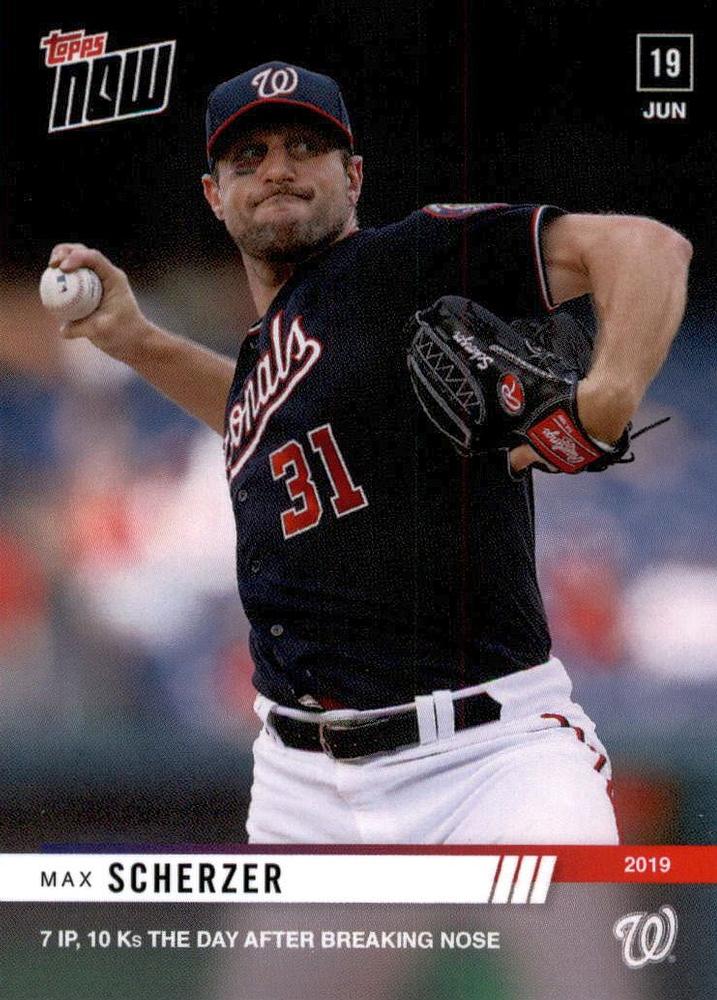 The 24,220 fans attending the second game of the day-night doubleheader might have expected a pitching duel: Both starting pitchers were former Cy Young Award winners.1 However, most fans would have understood if Max Scherzer had skipped this start or gone on the injured list. He had broken his nose just the day before during bunting practice but declared himself “good to go.” The heterochromatic Max was scary enough, but add an impressive black eye and the fans who saw him up close as he walked in from the bullpen were stunned. He swore that he really wasn’t in pain, just that he had to figure out how the swelling around his eye would move when he pitched.2

The first batter to face Max was Jean Segura. Despite Max putting a little extra on his fastball (96 and 97 MPH for the first two pitches), Segura singled into left. Bryce Harper was up next. Nationals fans were still booing their former star for signing with the Phillies. Harper fouled out into the left-field corner but Segura was able to tag up and go to second base. He made it to third on Scott Kingery’s groundout but was left there when Rhys Hoskins was called out on strikes. In the bottom of the first, Jake Arrieta (4.31 ERA, 6-5) induced three groundouts to dispose of the Nationals on an efficient 11 pitches.

In the second Brad Miller managed a single against Max, but that was it for the Phillies. In the bottom of the frame Juan Soto worked a walk but was erased when Matt Adams grounded into a double play. Brian Dozier then hit his second homer of the day to put the Nationals on the board. (He was only the second National to homer in both halves of a doubleheader; Adam Dunn did it on May 15, 2010.) Kurt Suzuki struck out, leaving the score 1-0, Nationals.

Max struck out Arrieta on three pitches to open the third. The only Phillie to reach base was Harper, who collected his 46th walk of the year and another earful of boos. Arrieta worked a 1-2-3 bottom of the third.

After Hoskins flied out to center to open the fourth, Jay Bruce reached on a slow roller down the third-base line. He was left on base when Max struck out César Hernández and Miller. The Nationals threatened in the bottom of the fourth. Adam Eaton singled, advanced to second when Arrieta’s fifth pickoff attempt bounced past first, and then to third on Soto’s groundout. With Miller playing away from third, Eaton spent most of Adams’s at-bat dancing halfway down the line toward home, perhaps trying to induce a balk. That’s as far as he got since Adams’s bid for a home run died in center.

Andrew Knapp started the fifth by striking out. Arrieta hit Scherzer’s third pitch well down the third-base line but didn’t run. The ball landed just a foot foul: Soto couldn’t get there in time. Had it landed fair, Arrieta would have had a double — except that he was still standing in the batter’s box. He may have heard about that later from his teammates. He struck out, then Segura hit a pop foul on the first pitch, so Max got a quick frame on nine pitches. Arrieta was also efficient: 12 pitches for a popout and two groundouts to end the inning.

Harper collected his 47th walk to start the sixth inning. Kingery popped out to Dozier, who caught the ball backpedaling into center. Hoskins bunted back to Scherzer, who threw to Dozier at second for the out, leaving Hoskins 0-for-17 against Max. The Nationals missed the double play by a fraction of a second. After the video review, Nationals manager Davey Martinez decided not to challenge. Max got the third out on Bruce’s infield popup near third. As Scherzer came to bat in the bottom of the sixth, the camera caught a fan behind home plate wearing a Max Scherzer face T-shirt — with athletic tape neatly applied across Max’s nose. Although Scherzer lined out to Harper in right, the fans cheered as he returned to the dugout. Trea Turner struck out and Eaton popped out to end the sixth inning and Arrieta’s day. Despite his solid pitching performance, lowering his ERA to 4.12, he was charged with the loss.

Scherzer returned to pitch the top of the seventh. Hernández opened with a double off the out-of-town scoreboard. Miller swung at 98 for the eighth strikeout. By now the crowd was cheering each strike, not just each strikeout. Knapp was out on a foul tip for strikeout number nine. J.T. Realmuto stepped in to pinch-hit for Arrieta: The crowd rose, yelling “Let’s Go, Max!” When Scherzer fanned Realmuto for his 10th strikeout, he snarled and stomped off the mound, high-fiving his way through the dugout with palm-stinging force.3 This was Max’s 88th career game with 10 or more strikeouts and his sixth in 2019. He was leading the majors with 138 strikeouts.

Juan Nicasio took the mound for Philadelphia in the seventh. After Anthony Rendon flied out to the warning track, Soto slapped one into left for a single. Adams struck out, then as Dozier came to bat, a shower came through the park. Play was not suspended but fans grabbed rain gear or headed for cover. The Nationals handed out rain ponchos but they were as hard to open as supermarket produce bags,4 so by the time all the fans had them on, the rain had stopped. Soto stole second: He managed to keep his foot on the bag as he slid over it. Nicasio slipped on the mound, possibly from the rain, but recovered to get Dozier to ground out to end the inning.

Wander Suero struck out Segura to start the eighth, although Segura helped him by swinging at ball four. Harper, still being booed, lined out. Kingery followed Segura by working the count full, then striking out swinging. In the bottom of the eighth, Pat Neshek, with his unusual sidewinder pitching motion, took the mound for Philly. After Suzuki grounded out, Victor Robles homered into the visitors bullpen. The usual dance was required when he returned to the dugout.5 Gerardo Parra had initiated the dugout dance after he joined the Nationals in May. He was up next to pinch-hit so the crowd enthusiastically clapped along with his walkup “Baby Shark” music. He flied out just short of the warning track. When throwing ball two to Turner, Neshek landed awkwardly and hopped off the mound – bringing the trainer, the catcher, the infield, and the umpire to the mound. He walked to the dugout unassisted, but it turned out to be a season-ending injury.6 J.D. Hammer took over with the count 2-and-0 on Turner. Hammer threw two more balls, walking Turner. (Since the count was 2-and-0, the walk was charged to Neshek. If it had been 1-and-0, the walk would have been charged to Hammer.) Trea stole second before he got his sliding mitt on properly, but he was safe with no throw. Eaton walked, but Rendon grounded out to end the inning with the score 2-0, Nationals.

The Nationals’ usual closer, Sean Doolittle, pitched the top of the ninth with little difficulty and with the crowd cheering each strike. Hoskins popped out and Bruce fouled out, both to Rendon. Hernández grounded out to first to end the game.

With the wins over Philadelphia, the Nationals pulled a half-game ahead of the Mets into third place in the division. These victories were part of the Nationals’ historic comeback from their 19-31 start, bottoming out on May 23 in fourth place in the NL East. They finished the regular season at 93-69 to earn a wild-card berth and went on to win the World Series. The Phillies were leading the division as late as June 11 but had sunk to fourth by the end of the season.

Scherzer had a strong first half of the season (9-5, 2.30 ERA, 181 strikeouts) and appeared to be headed for his fourth Cy Young Award, but injuries in the second half dropped him to third in the balloting behind Hyun-Jin Ryu and winner Jacob deGrom. This game won’t be mentioned on Max’s plaque in Cooperstown (assuming he makes it there) but his gutsy performance in this game certainly added to the “legend of Mad Max.”

3 Conversation with Spencer Clark, former Nationals batboy, who confirmed that Max puts as much energy into high-fives as he does everything else.