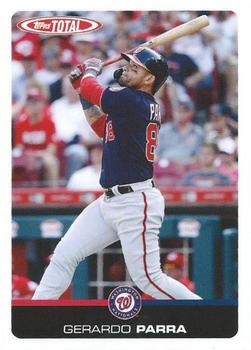 Washington Nationals fans could be forgiven if their focus was on the evening game of the doubleheader. Max Scherzer had broken his nose the day before in bunting practice, but declared himself “good to go” to pitch the night game. The day game had been scheduled for Monday night, rescheduled for Tuesday night, but both were rained out.1 Between the still-iffy weather and the rescheduling the attendance looked sparse. But those fans who did attend saw the beginning of a phenomenon that started quite innocently and ended with the Nationals World Series rings.

The fans would see a lot of first-pitch swinging: Perhaps the players were tired of hitting in the cage and ready to put their bats to good use.

Patrick Corbin was pitching for the Nationals. He was coming off a rough start (five innings, seven earned runs), entering the game with less than ace-like numbers (5-5, 4.11 ERA), although his home numbers were better than on the road.2 The Nationals (33-38) were fourth in the NL East, 8½ games back of Atlanta, but they had been playing well in the last month since bottoming out at 19-31.3

Jean Segura flied out on the first pitch. Despite the scant attendance, the boos rained down on Bryce Harper.4 On the second pitch, he flied out to Gerardo Parra in center. Scott Kingery stepped in. He was on a hot streak by anyone’s definition: Over the previous seven games, he batted .423. He homered into the visitors bullpen, despite Juan Soto climbing the fence trying for the catch. After Rhys Hoskins walked, J.T. Realmuto popped out on the first pitch. 1-0, Phillies.

The Phillies (39-32), who had been leading the division until June 11, were only 2½ games back of Atlanta. Zach Eflin (6-6, 2.81 ERA) faced Trea Turner, who looked at strike three. Adam Eaton doubled on the first pitch. Anthony Rendon hit a bouncer toward Kingery, who misjudged the bounce, allowing the ball to head into left field. Kingery was charged with an error although the amount of Diamond Dry on the infield may have affected the bounce. Soto singled, scoring Eaton. Matt Adams looked at strike three and Brian Dozier popped out, but the score was tied, 1-1.

Sean Rodríguez walked to open the second. Roman Quinn bunted toward Corbin, who spun and threw to second to get the lead runner. Quinn made it to second anyway, an easy steal since Nationals catcher Yan Gomes dropped the ball. But César Hernández and Eflin both went down swinging.

Parra was up first in the bottom of the second. He had been looking for something to get out of his 0-for-23 slump and decided to change his walkup music. After considering several other options he went with his 2-year-old daughter Aaliyah’s favorite: the South Korean hit “Baby Shark.”5 The new walkup music didn’t help: he rolled one to first for the out. Gomes flied out to Harper in right with fans booing the catch as well. Corbin struck out, giving Eflin a quick inning.

Corbin collected two more strikeouts in a one-two-three top of the third.

Turner thought he’d singled in the home half of the third but he was called out on replay. Hoskins had managed to keep a toe in contact with the side of the bag while stretching for the throw. Eaton battled but struck out, and Rendon grounded to third on the first pitch.

Corbin seemed to be hitting his stride: He struck out the side in the fourth.

Adams was credited with a one-out double when Harper couldn’t corral the ball at the bullpen fence. Parra stepped in with two outs, again with Baby Shark in the background. He swung at Eflin’s first pitch and dived into second with a go-ahead double. The Phillies intentionally walked Gomes to pitch to Corbin (.120 BA). It worked: Corbin grounded into a force play to end the inning, but the Nationals were up, 2-1.

Quinn hit the first pitch of the fifth toward first: Corbin beat him to the bag for the out. Hernandez singled and Eflin bunted him to second but he was left there when Segura grounded out.

Eflin worked a one-two-three bottom of the fifth.

Harper battled Corbin to earn a walk leading off the sixth. Kingery hit the ultimate seeing-eye single: The ball went straight up the middle, glanced off Corbin’s glove, evaded two diving infielders, and rolled into center, where it was scooped up barehanded by Parra. Parra gunned it to third in time for Rendon to tag Harper just as he slid in. Phillies manager Gabe Kapler challenged, but replay upheld the call. That was Parra’s 16th assist of the year. Hoskins singled to left, moving Kingery to second. Realmuto grounded toward third and beat the attempted double play at first. Although Hoskins went straight into Dozier at second to disrupt the double play, it was not an illegal slide. Rodríguez grounded out on the 3-and-0 pitch, leaving two runners on base.

Soto walked in the bottom of the inning and stole second. Dozier hit a one-out double down the third base line, scoring Soto. After Parra struck out, the Phillies intentionally walked Gomes to pitch to Corbin. That worked again: Corbin was Eflin’s seventh strikeout of the day, but the Nationals were leading 3-1.

Although Tanner Rainey was ready in the bullpen, Corbin pitched the seventh. Quinn and Hernández had long at-bats but Corbin won the battles. Corbin threw his 101st and final pitch to pinch-hitter Andrew Knapp: He grounded out to short.

Edubray Ramos pitched a very efficient bottom of the seventh for the Phillies: Nine pitches for two popouts and a groundout.

Rainey started his relief outing by striking out Segura, but he walked Harper. Kingery flied out, but Rainey plunked Hoskins in the side, triggering a mound visit from pitching coach Paul Menhart. Realmuto worked the count full, but grounded to short, leaving two more runners on base.

Cole Irvin was the next Phillies relief pitcher, in the eighth. Soto singled and took second on a wild pitch. It wasn’t Adams’s walkup music, but the Nationals Park organist played the Addams Family theme when he was up to bat. Adams was rung up on another pitch that appeared to be off the plate away: He complained to home-plate umpire Paul Nauert but wasn’t ejected. Dozier added to the Nationals’ lead with a homer just into the flowerbed that borders the left-field stands: 5-1, Nationals. Parra’s homer was a no-doubter: It bounced off the façade above the Nationals bullpen. That was all for Irvin: Edgar García got the next two outs to end the inning but the Nationals were leading, 6-1.

Given the Nationals’ scoring in the eighth, manager Davey Martinez told their usual closer, Sean Doolittle, to sit down and Javy Guerra to come in. He got two quick groundouts (Rodríguez and Quinn), then allowed a single to Hernández. He scored when pinch-hitter Brad Miller tripled just inside the first-base line. Doolittle got up and started throwing again but he wasn’t needed: Segura grounded out to short to end the game with the score 6-2, Nationals.

Given his great day at the plate and in the field, Parra stuck with Baby Shark for his walkup music. It took a few games, but the fans started doing the hand and arm motions along with Baby Shark as Parra would come up to bat. Soon the players started doing the motions: “Baby Shark” (just fingers) for a single, “Mommy Shark” (hands) for a double, and “Daddy Shark” (full arm motion) for a triple. By the end of the season, and through the postseason, the phenomenon spread until fans were showing up in full shark costumes.6

It was a children’s song with a silly routine, but there was nothing silly about the joy that Parra brought to the Nationals clubhouse when he was picked up on waivers from the Giants in May. In acknowledgment of his contribution to their World Series win,7 their rings have the Baby Shark logo inside.8

I attended this game, then headed to a local watering hole with dozens of my closest friends to await the opening of the ballpark for the night game with Max pitching with a broken nose. Probably one of the best days of baseball in my life: I was there at the birth of a phenomenon that carried the Nationals and their fans all the way to their Game Seven World Series victory that October.

In addition to the sources listed in the notes and her own notes, the author consulted Baseball-Reference.com and Retrosheet.org, and viewed the broadcast on MLB.com.

2 Oddly enough, he had pitched 42⅔ innings at home and the same number of innings on the road. At home, he’d allowed 11 earned runs: On the road, he’d allowed 28 runs.

4 Harper, who spent the first seven years of his career with the Nationals, had signed with division rival Philadelphia as a free agent during the offseason. Throughout the 2019 season, Nationals fans expressed their displeasure with his decision.

6 Allen. For a visual, see youtube.com/watch?v=a-rqdnyQc2s.