This article was written by T.S. Flynn 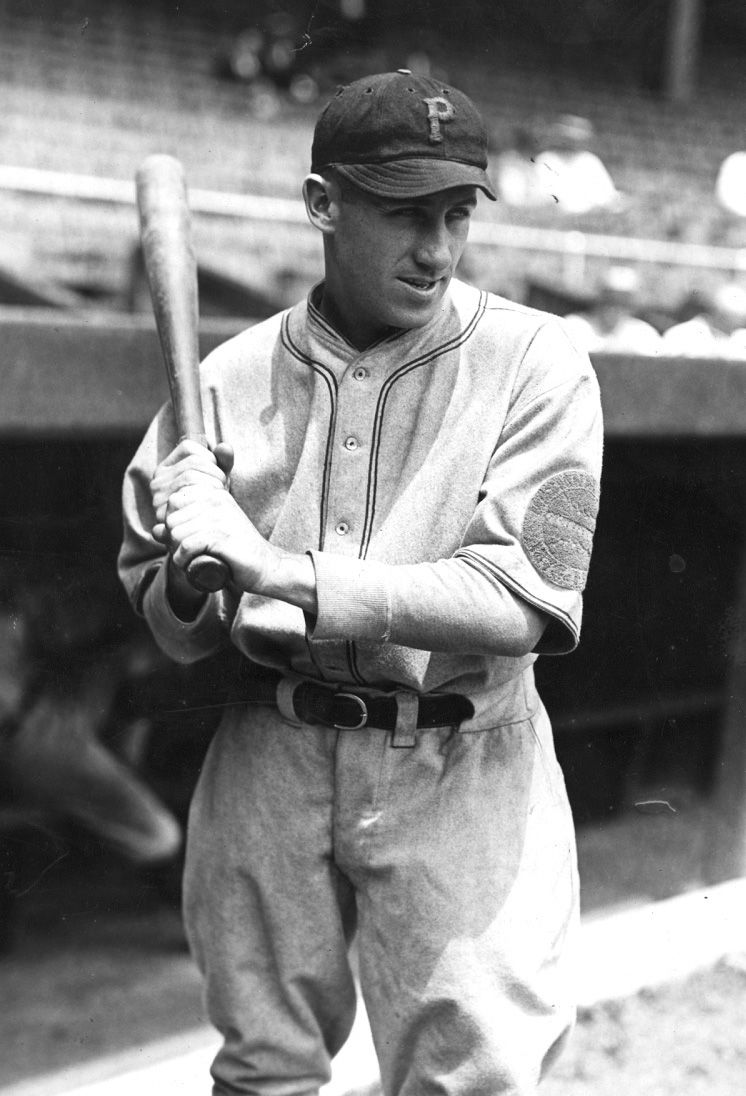 Promoted as a Father’s Day game because Sunday ball still ran afoul of Pittsburgh’s blue laws, the Saturday Robins-Pirates matinee drew an impressive crowd of 18,000 (about 8,000 more than the Forbes Field average in 1925).1 The holiday throng would be treated to an orgy of offense that commenced shortly after the conclusion of a staid pregame ceremony that included a congregation of Missouri Synod Lutherans presenting a gold watch and other gifts to Bucs captain Max Carey.2 The Pittsburgh center fielder had attended Concordia Lutheran Seminary in St. Louis prior to pursuing a career in baseball,3 and he responded to the benevolent shower with a historic performance that afternoon, becoming the first switch-hitter to hit for the cycle. In most cases, such a deed would dominate the headlines. On this day, however, Carey’s exploits paled in comparison to those of teammate Hazen “Kiki” Cuyler, who collected four hits (three of the extra-base variety), five runs, six RBIs, and 12 total bases.

Cuyler had emerged as a formidable offensive threat during his 1924 rookie season. His average peaked at .380 on September 6. Handicapped by a shoulder injury down the stretch, he finished with a .354 batting average in 117 games.4 Now, a few months into the 1925 campaign, the 26-year-old Cuyler was healthy and proving he belonged in the bigs. He had hit for the cycle against the Phillies on June 4and was batting .343 with 57 runs in 53 games entering the Father’s Day tilt.

A pair of two-out first-inning Brooklyn singles initiated the scoring against Pittsburgh starter Babe Adams . After his base knock, Zack Wheat went from first to third on Jack Fournier’s safety and scored when Pirates second baseman Eddie Moore muffed Cuyler’s throw from right field. Moore and Cuyler retaliated in the home half of the first with a single and home run, respectively, giving the Bucs a 2-1 lead. They never looked back. Three more first-inning hits, including a run-scoring triple by Glenn Wright and a single by Stuffy McInnis, ended Brooklyn starter Jesse Petty’s day. Predictably, Pittsburgh’s right-handed lineup had shredded the southpaw. Petty had been pressed into the start because Brooklyn manager Wilbert Robinson had exhausted his right-handed starting  options (Burleigh Grimes, Dazzy Vance, Tiny Osborne, and Rube Ehrhardt) in the first three games of the series.

Robins righty Bill Hubbell provided some offense in the second when he doubled in Dick Loftus. But the prodigious Pirates offense was just getting started. Moore singled and Cuyler was hit by a pitch. A flurry of hits followed: Wright doubled, McInnis and Adams singled, and Carey doubled. Meanwhile, Brooklyn inserted its third pitcher of the afternoon, lefty Nelson Greene. When the dust finally settled, Pittsburgh’s lead had swollen to 9-2 on six second-inning hits and five more runs.

The Robins continued to battle and plated a run in the third via Eddie Brown’s triple.They still faced a formidable six-run deficit to the Pirates, an offensive juggernaut that entered the weekend batting .323 as a team, 12 points better than the second-best Phillies.5 In the bottom of the frame, Brooklyn kept Cuyler off the bases. It was a small victory negated three batters later when Clyde Barnhart and Pie Traynor both scored on Greene’s two-out wild pitch. Just like that, the Bucs led 11-3.

The scoreboard operators enjoyed a break in the fourth; both teams failed to score. But the Bucs provided some excitement. Carey tripled on a shot into the right-field corner, and Moore followed with a base on balls. Then, with two outs and an eight-run lead, the Pirates attempted a double steal. Carey was tagged out at the plate.

The Pirates began the day 2½ games behind the National League-leading New York Giants, who were in Cincinnati, battling the third-place Reds. Just nine days earlier the Robins owned second place and 6½ games separated the Giants and third-place Bucs. Then Pittsburgh went on a tear. “In the week which closed yesterday,” the Daily Post summarized, “the Pirates dealt with the two teams generally agreed upon as the clubs which make the most trouble for pennant contenders.”6 They swept the Giants in four games and, so far, had taken two of three from Brooklyn, leapfrogging the Robins in the standings. The Father’s Day game was the concluding date of a homestand that seemed likely to change the tone of the Pirates’ season. They had won 11 of 15 during that stretch and the Daily Postdeclared, “Leaving home soil the Pirates are in much better shape than when they left their neighbor’s territory. The pitchers have reached shape and the team is hitting like none other.”7 By the end of June the Pirates and Giants would share the league lead. On October 4, the season’s last day, the Corsairs would celebrate winning the pennant by 8½ games.

The Brooklyn club, on the other hand, entered this late-June Pittsburgh series in dire need of pitching. Bill Doak, a steady presence in their 1924 rotation, retired over the offseason to become a Florida real-estate salesman.8 By early June, the club had failed to find a suitable replacement and manager Robinson urged Doak, a right-hander, to reconsider his decision. He declined. The Daily Postjoked, “‘Only a stone’s throw from the nearest car line,’ Doak is telling prospective customers these days, while Robbie sighs and informs mourners, ‘Only a good pitcher removed from the flag.’”9

Pitching woes aside, the Robins needed more offense this day, but in their half of the fifth they laid another egg. The Pirates added another crooked number to their nest, thanks to Cuyler’s leadoff single and Wright’s ninthhome run of 1925. The blast struck the facing in front of the right-field grandstand and bounded the seats. It sailed out of the ballpark and a dozen children chased the bouncing ball down into Panther Hollow (an Italian immigrant neighborhood bordering Forbes Field).10 Pittsburgh’s pair of runs made it 13-3.

In the sixth, the Robins surrendered in order again. Then the Pirates offense resumed the onslaught. Adams singled and Carey hit a long fly into the left-field corner. Adams held at second, limiting Carey to a single. Greene balked and then walked Moore. Cuyler smoked a drive past Eddie Brown in center, and the super sophomore sprinted around the bases for an inside-the-park grand slam, his second round-tripper and third hit of the game. The Pirates’ lead expanded to 17-3.

The visitors gamely added a pair of runs in the top of the seventh on a Hod Ford single, Charlie Hargreaves’s triple, and a single by Greene, but it was a death rattle. Brooklyn’s fifth run would be its last of the day. The Bucs, however, had more in store. Following a walk to McInnis and Johnny Gooch's single, Adams bunted the runners to second and third. Carey stepped to the plate needing a home run for the cycle. He delivered a drive into the left-field corner and didn’t stop running until he crossed the plate. After Johnny Rawlings popped out, Cuyler tripled to center for his fourth hit. He trotted home on Barnhart’s single with his fifth run, the team’s 21st of the day (all earned).

Two eighth-inning Brooklyn singles brought their hit total to 12 for the game (they’d add another in the ninth). In the home half, McInnis lobbed a Texas Leaguer behind third for a double, the Bucs’ 25th safety of the day. The offensive excess had noticeably sapped the fans. According to the Post Gazette, “the holiday audience weakened under the strain of shouting and handclapping. An extra base hit by the Pirates after the seventh inning could not stir the fed up throng. There were so many homers of varied hue to cheer in the first half of the so-called contest that when the ninth arrived thousands were missing from the seats they cherished before the alleged battle started.”11 It ended Pittsburgh 21, Brooklyn 5.

The Bucs traveled to St. Louis next, where they thumped the Cardinals 24-6, for a two-game total of 45 runs scored in 17 innings. Paced by their captain Carey and the ascendant Cuyler, the Pirates hit .307/.818/.449 as a team in 1925. The 35-year-old Carey stole 46 bases in 133 games and hit to the tune of .343/.909/.491. Cuyler amassed an astounding 144 runs, 220 hits, and 41 stolen bases while hitting .357/1.021/.598 in 153 games. He lost the Most Valuable Player Award to Rogers Hornsby (.403/1.245/.756), who authored his second Triple Crown season for the Cardinals in 1925. But Carey and the Pirates crowned their season with the World Series championship. After falling behind Washington three games to one in the Series, the Bucs won the next two, and the season culminated in a thrilling Game Seven against Walter Johnson in the rain at Forbes Field. Pittsburgh trailed until the bottom of the eighth, when Cuyler stroked a two-out, two-run double off the Big Train to seize the lead. They finished off the Senators to complete their sensational comeback.

In addition to the sources identified in the endnotes, the author consulted Baseball-Reference.com and Retrosheet.