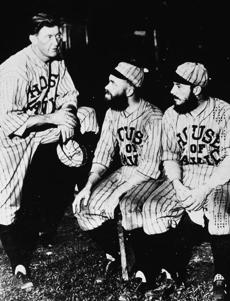 On the evening of June 20, 1931, in Jamestown, North Dakota, an estimated crowd of 1,800 came out to the ballpark to see something old and something new. The “old” was Grover Cleveland “Old Pete” Alexander, the winner of 373 major-league games, who would be inducted into the National Baseball Hall of Fame in 1938. He was now 44 years old, having thrown his last big-league pitch just the year before. He was the manager and occasional pitcher for the House of David, a traveling team of hirsute professional ballplayers. The “new” was baseball under the lights, a real novelty.

A night baseball game had been played as early as 1880, when teams from two rival department stores played under lights in Hull, Massachusetts.1 It was only after a 1927 exhibition game staged by the General Electric Company for the benefit of Organized Baseball executives, however, that the concept of night baseball gained credibility. The success of the General Electric game “had some league owners and managers considering the benefits of nighttime play.”2

In 1930, the Independence (Kansas) Producers of the Class C Western League installed permanent lighting at their baseball park. On April 28 of that year, they hosted the Muskogee Chiefs in the first night game in Organized Baseball.3 But 11 days prior to that historic game, the Producers had tested the lighting system in a game against the same House of David team that would introduce night baseball to Jamestown.4

The Israel House of David was a religious colony founded in Benton Harbor, Michigan, in 1903.5 The men wore beards and long hair, halfway down the back.6 Hair was forbidden to be cut or shaved as a tenet of their faith.7 The colony began playing baseball to encourage the physical activity of younger members, and eventually began charging admission for their games.8 By the early 1920s, House of David had a formidable traveling team supplemented by professional players who were also required to grow beards and long hair.9

The 1931 team that introduced night baseball to Jamestown “played from coast to coast, winning a reported 110 out of 155 games played.”10 On June 20 the lineup included only two colony members; the other players were hired. Grover Cleveland Alexander joined the team in the spring of 1931 and continued to play with and manage House of David for several years. House of David was “famous for their long hair, high level of play, and such popular stunts as the ‘pepper game.’”11

Two days before the game, the Jamestown Sun trumpeted the importance of the event, writing that “the first night baseball will be played here.”12 It explained, “The equipment is carried in several trucks and put up, making the field a regular daylight plot.”13 The article was even more effusive in its praise of Old Pete himself, although the author seemed to be confusing the pitcher with the former president. “Grover Cleveland will be worth meeting by those who have never seen the man who made himself and baseball famous as a National League pitcher.”14

A game-day article reminded its readers, “The game will be played under huge flood lights that will make the field as light as day.”15 It would begin at 10 o’clock because “absolute darkness must be had before the game is a success.”16 It acknowledged that the visitors “are really fine ballplayers” who could be playing for “fast baseball clubs in the east” if not for their religious beliefs.17 It reassured the Jamestown faithful, “The local boys have been working out this week and are in good shape to show the House of David some really fine ball.”18

The home team took the field in their newly purchased gray wool uniforms with red lettering, collar, and trim with “Jamestown” across the front and a sponsoring business on the back. The stockings were red and white; the cap red.19 Jamestown recorded three quick outs in the first inning on two fly balls and a hard grounder to third baseman Eddy Schauer. In the bottom of the first, though, House of David pitcher Albert “Lefty” Tolles struck out the side, recording three of his 15 strikeouts. Neither team scored in the second inning, but the visitors put up six runs in the third and went on to win 20-1, collecting 22 hits, including three home runs. Outfielder Carl “Cyclone” Pederson led the way with a grand slam, triple, and four runs batted in. Jamestown scored in the fourth inning when a throwing error allowed a runner to cross the plate. Alexander pitched a 1-2-3 ninth inning, striking out the first batter, then finishing Jamestown off with two fly balls.

According to the newspaper account, House of David had not lost any night games on their trip. “The lights did not bother them as it did the Jamestown fielders.”20 Jamestown committed five errors, but also turned four double plays, preventing an even more lopsided game. The reporter, looking through rose-colored glasses, editorialized, “Jamestown fans would like to see the Whiskers return to Jamestown for a day game and the story would be entirely different.”21

The reporter touted the visitors’ skill, knowledge and concentration, and complimented their showmanship. “The pepper game with Bill Heckman as the batter and Dutch Faust, Lloyd Miller, and Arlie Hipp as the performers was first class. These men are just as clever as they can be. And would be able to give an entire evening’s entertainment if they chose.”22 Here is how one former player, Tom Dewhirst, later described House of David pepper:

“Several players with gloves got together in front of the stands and started to toss a ball among themselves. They tossed the ball behind their backs, between their legs, over their shoulders, or faked a throw with one hand while flipping the ball with the other. Faster and faster the ball — and gloves — were tossed among the players. Suddenly the ball would disappear from the swirling action. The players, acting puzzled, looked for it everywhere. Then the batter, joining the search, would grab one player by his beard, lift it up, and out would drop the ball.”23

The Jamestown Sun reporter was also impressed by the portable lights:

“The Monarch Lighting system is wonderful. It makes the field appear as it does in perfect daylight. Power is generated from a large car which contains all the machinery. The engine consumes 15 gallons of gasoline an hour. There are 15 men in the crew and every reflector is 4500 watts. The lights are on large poles placed in advantageous positions in the ground. The apparatus can be set up in one hour and 45 minutes. The motor is of 250 horsepower. The same plant used here was used in New York City and at Forbes Field in Pittsburgh.”24

The lighting system fits the description of one belonging to the Negro League’s Kansas City Monarchs, who were among the first to embrace night games.25 House of David frequently played against and traveled with the Monarchs,26 so no doubt they were renting the lights from their rival.

The game was one-sided, but fans were greatly entertained, and experienced something unique.   Jamestown got its wish to play “the Whiskers” in the daytime too. The following year, an improved Jamestown team beat the House of David behind the pitching of Negro League legend Wilber “Bullet” Rogan, and in 1934, perhaps Jamestown’s best team ever, beat them two of three games in a weekend series.27

2 Ibid. In the 1930s there were two sometimes overlapping baseball universes. As Metcalf so clearly explains, “Organized Baseball was the term used to describe Major League Baseball and the associated minor leagues. The leagues are governed by rules and agreements such as the National Association Rules, Major-Minor League Rules, and the Major-Minor League Agreement. Besides the rules and agreements, the leagues, teams and players are governed by the Commissioner of Baseball.” Neither Jamestown nor the House of David were part of Organized Baseball. They were both independent teams, part of something sometimes called “Outlaw Baseball,” which was largely unregulated and which included Negro Leagues, barnstorming teams of all races, both genders, and local teams of professional, or semirofessional players.

9 Alexander was exempt from the beard requirement as was the great female athlete Babe Didrickson.