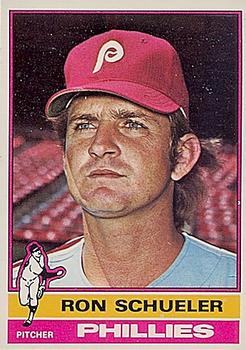 The Philadelphia Phillies (35-32) began the day continuing to find themselves in unfamiliar territory – first place.1 On the other hand, the defending National League champion New York Mets (26-39) began the day in last place, eight games behind of the Phillies, and had the major leagues’ worst record.2

Wayne Garrett led off the game with a single to center off Ron Schueler, and was sacrificed to second by Felix Millan.3 However, Rusty Staub grounded out to second to end the inning. The Phillies scored early and often against Harry Parker. Larry Bowa singled to center with one out in the bottom of the first and went to third on Del Unser’s double to center. Mike Schmidt’s triple to center scored both runners.4 Tom Hutton’s groundout to second scored Schmidt. “You can pitch differently with a run like that,” Schueler said. “You can challenge hitters.”5

Montanez led off the inning with a double to center and Bob Boone’s single to center scored Montanez. Boone was thrown out at second, Dave Schneck to John Milner to Garrett.8

The Mets scored their only runs in the sixth. Garrett’s single led off the inning. Millan reached on a force-play grounder to third. Schueler “then watched Mike Anderson soar high above the right-field warning track to make a phenomenal backhanded catch that robbed Cleon Jones of extra bases. But it was not enough to preserve his shutout. He followed by throwing a Rusty Staub an off-speed pitch on a 1-2 count and Staub bounced it over the right-field fair-foul pole his 11th home run of the season.”9

After Staub’s home run, Schueler “found his ‘A’ curve ball, ‘the best one I’ve have had all year.’ He struck out the next four Mets and allowed just one more hit the rest of the way in recording his fourth victory of the season.”10 Schueler’s win broke multiple personal losing streaks.11 He also continued his career success against the Mets.12

The Philadelphia Inquirer’s Bruce Keidan wrote, “No one worked harder than Schueler. A week earlier, he was on the brink of asking to be removed from the starting rotation. ‘The first thing (manager Danny Ozark) said to me was that he believed in me. He said, “I’m sticking with you,” After that, there was nothing for me to do but try to live up to his confidence in me.’”13

In addition to the sources mentioned in the Notes, the author referred to Baseball-Reference.com and Retrosheet.org for box scores, play-by-plays, and other pertinent information.

1 The Phillies were a half-game ahead of the St. Louis Cardinals entering the doubleheader.

2 The Mets had been in sole possession of last place since June 16. They were also in last place for one game on April 24. The Mets had yet to finish the season in last since divisional play began in 1969. They previously finished in last in 1967 (61-101).

3 Garrett entered the doubleheader with the worst batting average (.178) and third worst on-base percentage (.273) in the NL.

4 Schmidt was making his first career start batting cleanup and his second appearance overall. (He previously batted cleanup on August 2 1973.) Schmidt went on to bat cleanup in 1,027 games, more than any other spot in the lineup. He entered the doubleheader third in slugging percentage (.591) and tied for fourth in the NL with 50 RBIs.

6 Cash’s 22 singles against the Mets were the most among all 1974 opponents.

7 Parker’s 1⅔ innings pitched tied for his shortest start of the season. He also pitched 1⅔ innings against the Atlanta Braves on June 17.

8 After Sadecki allowed a two-out, fourth-inning single to Cash, he and Jack Aker combined to allow two hits over the remaining 4⅓ innings. Sadecki’s 5⅓ relief innings pitched were a season high.

9 Kiedan, “Schueler, Twitchell Beat Mets.” Staub’s five home runs against the Phillies in 1974 were more than any other opponent.

12 His six career wins against the Mets were more than any other opponent. Schueler’s career batting line of .193/.271/.323 against the Mets were the best of any pitcher with 100 or more plate appearances. He limited the Mets to a 2.91 ERA in 55⅓ innings pitched in eight career starts (three complete games).