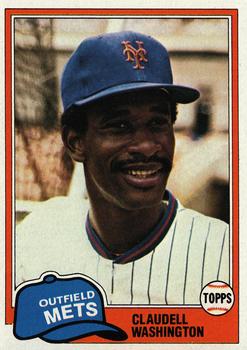 Although Mets fans did not have much to celebrate in 1980, they sliced their prism of misery on June 22: Claudell Washington banged three home runs and notched five RBIs against the Los Angeles Dodgers in a 9-6 victory at Dodger Stadium.1 Washington had come to the Mets two weeks before in a trade with the White Sox for minor-league hurler Jesse James Anderson.2 White Sox owner Bill Veeck explained, “The Mets needed something right now. On the other hand, we can deal in futures, because we have an excess of outfielders.”3 Chicago skipper Tony La Russa confirmed that Washington’s fellow outfielders “were making greater contributions,” which inspired the trade.

Anderson never reached the majors; he ended his minor-league career with the 1983 season and a 30-38 career won-lost tally.

The 1980 Mets finished the season with a 67-95 record, contradicting their new slogan: The Magic Is Back. But this June afternoon restored so much enchantment to the team’s fortunes that it felt as if the magician Doug Henning might have been involved. It was a welcome respite from the despair pervading Mets Nation. Before the game, the Mets had been on a seven-game losing streak that began with a loss to the San Francisco Giants at Shea Stadium and continued with the first six games of a 15-game road trip.

Washington et al. got a boost from the events of June 22, which was the last of the three-game series at Dodger Stadium. The Mets went 6-2 for the road trip’s remaining games in Chicago and Philadelphia.

New York nicked Dodgers right-hander Dave Goltz for two runs in the top of the first inning. Joel Youngblood led off with a 6-3 groundout, but Elliott Maddox crushed a left-field double and scored on Washington’s first homer of the day.

John Pacella lasted about as long as it takes to buy a couple of Dodger Dogs and a beer, get back to your seat, and consume them. Mets skipper Joe Torre yanked his right-handed starter after the Dodgers scored two runs in the bottom of the second; fellow righty Mark Bomback replaced him.

In the top of the fourth, rookie José Moreno gave the Mets some padding when he tripled with two men on base; Doug Flynn’s sacrifice fly scored Moreno.

LA crawled back with a run in the bottom half of the inning. Steve Yeager doubled, then scored on second baseman Moreno’s error on Rudy Law’s grounder. Mets southpaw Ed Glynn relieved Bomback with two outs and retired Jay Johnstone with a groundout to Moreno.

The Mets extended their lead to 8-3 in the top of the fifth. Elliot Maddox hit a one-out bunt single to third base, and Washington crushed his second round-tripper. Steve Henderson continued the pounding with a triple and Goltz gave an intentional walk to Mike Jorgensen before Tommy Lasorda sent for right-handed reliever Joe Beckwith.

Henderson scored on John Stearns’s 6-4 forceout, then Moreno ended the half-inning with a fly to Johnstone.

Charlie Hough began the top of the seventh for the Dodgers by striking out Maddox and giving up Washington’s third home run, a solo bash putting the Mets up 9-3.

Los Angeles rebounded in the bottom half for three runs. Law singled and moved to third base on Davey Lopes’s double. Lasorda sent Pedro Guerrero to hit for Johnstone. Guerrero, a part-time player in 1980 (75 games), batted .322. He knocked a single to score Law and advance Lopes to third base.

Torre brought in Neil Allen to relieve Glynn, but the Dodgers propelled forward against the right-hander. Perennial All-Star and 1980 NL hit leader Steve Garvey singled Lopes home; Guerrero got to third base and scored on Baker’s sacrifice fly. Cey’s groundball to Maddox became a 5-4 forceout; Derrel Thomas struck out.

After the game, Washington broke down his recent dry spell and astonishing feat: “The Mets got me because they wanted my help and I wasn’t giving it to them because I wasn’t swinging. I was trying too hard and doing things unnatural. I was swinging too hard and trying to hit home runs. Today, I just tried to take a level swing. I’m a level hitter.”4

Washington finished 1980 with 10 home runs for the Mets; he had one for the White Sox. During the offseason, Atlanta Braves owner Ted Turner singlehandedly handled the negotiation for Washington –five years and $3.5 million for the free agent.5 After his stint with Atlanta ended in a trade to the Yankees in 1986, he played in pinstripes through 1988 and for the Angels in 1989. Washington returned to the Yankees after playing in 12 Angels games in 1990, which was his last season. He ended his career with a .278 batting average and 164 home runs.

Goltz’s outing on June 22 indicated a subpar season far short of his 20 wins leading the American League in 1977 and two subsequent winning seasons. The Dodgers signed Goltz to a six-year, $3.1 million contract before the 1980 season, giving him the highest salary on the roster.6 In 1980, Goltz went 7-11.

“It’s hard for me to say just what’s wrong,” confessed the hurler after the Mets game. “I wish I could pinpoint it.” In his previous start, Goltz was tagged for 11 hits and five runs by the Phillies. He left that game after 6⅓ innings.7

Washington died on June 9, 2020. It was noted that the ex-ballplayer was fighting prostate cancer. But his obituaries also highlighted a place in popular culture. In the 1986 movie Ferris Bueller’s Day Off, the title character goes to Wrigley Field with his best friend, Cameron Frye, to see a Cubs-Braves game. The viewers see Ferris catch a foul ball presumably hit by Washington, then playing for the Atlanta Braves. His at-bat resulted in a fly out to Cubs left fielder and former Dodger Davey Lopes.

It was the June 5, 1985, game, which the Braves won 4-2. Part of the scene shows the television broadcast with Washington at the plate. But the shot of Matthew Broderick as Ferris Bueller catching the ball in the stands was filmed at the Expos-Cubs game on September 24. The Expos won 17-15.8

The author used Baseball-Reference.com and retrosheet.org for box scores and play-by-play information.