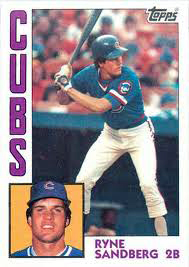 The Chicago Cubs were struggling.

For the first two months of the season, they were a cute story. Since mid-May, the lovable losers of recent years had spent much of their time in first place in the National League East. Starting on June 6, however, the team lost ten of 16 games. The lowlight was a four-game sweep in Philadelphia in which they were outscored, 33-13. That knocked them out of the top spot, and it looked for a while like things were reverting to form at 1060 West Addison.

As the day began on June 23, the Cubs found themselves in third place, a game and a half behind the division-leading Mets. The St. Louis Cardinals were in town, a team that was barely treading water at 34-37. The Cubs sent Steve “Rainbow” Trout to the mound, while the Cardinals countered with virtual-unknown Ralph Citarella, making his first big-league start. It was a nationally televised Saturday afternoon Game of the Week on NBC, with Bob Costas and Tony Kubek doing the honors. Before the contest began, Kubek observed, “The wind…blowing in from right field, so it’ll kill any ball hit to the right field sector. Anything hit to left-center will be…given a little help, if it’s up in the air.”1

It looked at the outset like the Cubs’ swoon was going to continue. Trout bombed early, and by the time they came to bat in their half of the sixth, they were down 9-3. Suddenly, however, their bats woke up. They scored five runs in that frame, sending Citarella to the showers, to quickly turn a yawner into a tense, exciting one-run game.

That is how the score remained until the bottom of the ninth. “This has been one entertaining ball game, folks,” Costas commented, just in case any of the viewers at home didn’t already know it. On the mound for St. Louis was their ace reliever (and former Cy Young Award-winner with the Cubs) Bruce Sutter, who had entered the game in the bottom of the seventh. He had faced four batters so far, and gotten four harmless groundball outs. Leading off for the North Siders was their fine young second baseman Ryne Sandberg, who already had three singles and four RBIs in the game. On a 1-1 count, Sandberg took Sutter downtown, drilling a hanging curve over the left-center-field bleachers, onto Waveland Avenue. The game was tied, to the delight of the frenetic Wrigley Field faithful. The Cubs got the winning run to third base with two out in the person of Gary Matthews, but a groundout ended the inning, sending the game into extras.

St. Louis put a quick stop to the buzz going on at the ballpark, by scoring a pair of runs in the top of the tenth. Sutter was still on the mound, and Chicago appeared to have its work cut out as the bottom half of the inning loomed. Two quick ground-ball outs did nothing but deflate any remaining air left in the Cubs’ party balloon. But Bob Dernier walked, and Sutter was left to again face Sandberg. The count went to 1-1, at which point Costas began rapidly reciting to the TV crowd that “our game today was produced by Ken Edmundson, directed by Bucky Gunts, Mike Weisman is the executive producer of NBC Sports, coordinating producer of baseball Harry Coyle. One-one pitch.” Sutter served. Sandberg swung. Kubek belted out a distended “Ooooooh myyy!” Costas was surely more descriptive: “And he hits it to deep left center! Look out! Do you believe it! It’s gone!” Both said nothing for the next 50 seconds. Viewers across the nation watched dumbfounded as 38,079 people suddenly went certifiably insane at Wrigley Field.

In the next booth over from Costas and Kubek were Harry Caray, Lou Boudreau, and Milo Hamilton, who had spent the afternoon taking turns describing the game for Chicago’s WGN radio. As Sandberg’s second home run soared toward the bleachers, the three went into a collective fit of frenzy, and Caray’s voice was nearly drowned out in his broadcast partners’ delirious “Oh-hohs!” and “Hey-heeeeys!” “THERE’S A LONG DRIVE,” Caray shouted. “WAY BACK! MIGHT BE OUTTA HERE! IT IS! IT IS! HE DID IT! HE DID IT AGAIN! THE GAME IS TIED! THE GAME IS TIED! HO-LY COW!” It was Caray at his flabbergasted finest. “EVERYONE IS GONE BANANAS! HO-LY COW! WHAT WOULD THE ODDS BE,” Caray asked, his voice betraying his emotion, throwing out the question to anyone with a calculator, “IF I TOLD YOU THAT TWICE SANDBERG WOULD HIT HOME RUNS OFF BRUCE SUTTER?!” Cardinal manager Whitey Herzog kept Sutter in the game. “Here now is Gary Matthews,” Caray noted. “C’MON, YOU GUYS!”2

But the guys didn’t come on. Matthews grounded out, and the inning was over, much to the relief of Sutter.

St. Louis threatened but didn’t score in the 11th. Finally, mercifully, Dave Rucker replaced Sutter to start the Cub half of the inning. Leon Durham led off with a walk, stole second, and advanced to third as catcher Darrell Porter’s throw bounced into center field. Jeff Lahti replaced Rucker on the mound. Keith Moreland and Jody Davis were both intentionally walked to set up a force at any base. “What a ballgame!” Caray exclaimed, apparently still unable to believe what he had witnessed moments before. “Hey! Was that 23-21 game against the Phillies any more exciting?” he asked, referring to a legendary 1979 Wrigley Field game (actually 23-22). “No, nope, no way,” Boudreau and Hamilton stated emphatically. Dave Owen, the last position player available on the Cub bench, came on to pinch-hit. A switch-hitter, he batted left-handed against the righty Lahti. The trouble was, Owen was hitting .133 from the left side. It would not matter this day. Owen drove a single into right field, Durham scored, and just like that, the rollercoaster affair had come to an end. “CUBS WIN!” Caray shouted. “CUBS WIN! CUBS WIN! HO-LY COW! LISTEN TO THE CROWD!” After letting the noise wash over him for a few seconds, Caray declared: “I NEVER SAW A GAME LIKE THIS IN MY LIFE, AND I’VE BEEN AROUND A LONG LIFE! WHAT A VICTORY! WHAT A VICTORY! LISTEN TO THE HAND THE CUBS ARE GETTING!”

Costas, on the other hand, chose a more understated description of Owen’s hit. “That’s it!” Moments later, before cutting to a commercial, he would confess, “Can’t remember the last time I saw a better one!” Indeed, neither could many people. It was a thrilling game, an instant classic, highlighted by two unforgettable at-bats involving two future Hall of Fame players in Sutter and Sandberg.

It was a coming-out party, both for Sandberg and the Cubs, as their grand performances occurred on a national stage. Back in the days before the proliferation of cable television, NBC’s Game of the Week was so named because it was just that. For just about everyone, it was the only baseball game they could watch during the week, other than their local team’s broadcasts. The victory was a catalyst for the Cubs, who went on to win the division title that year. For Sandberg, it put his name in the public consciousness, and started him on the way to a glorious career in Cub pinstripes. “It is the kind of stuff of which Most Valuable Player seasons are made,” sportswriter Dave Van Dyck proclaimed soon after the game.3 Indeed, Sandberg was named the NL MVP in 1984. He recalled years later, “It was a one-game thing that elevated my thought of what I was as a player, more of an impact-type of a guy, a game-winning type of a player.”4 As the decades passed, the contest was elevated to the status of myth, eventually becoming known simply as “The Sandberg Game.”

To many Cubs fans, the game became a cultural touchstone. “Fans come up to me all the time and they want to talk about that game,” Sandberg says. “They tell me where they were. They were either driving in a car listening to the game…or they were at the game or watching it on TV. They were calling their relatives, (saying) ‘you’ve got to turn this game on!’”5

Nearly lost in all the brouhaha was the fact that Willie McGee, star center fielder for the Cardinals, hit for the cycle that day, with six RBIs. For Sutter, it was the low point of perhaps his most brilliant season, as he finished with a career-high 45 saves and a 1.54 ERA. Reflecting back on his days on the diamond, Sandberg admitted, “It was nothing to [Sutter’s] career. It was everything to mine.”6

1 All broadcast citations from the NBC Game of the Week are from: John Mongani, “Ryne Sandberg vs. Willie McGee,” YouTube video, 19:28. Uploaded January 11, 2014. https://www.youtube.com/watch?v=dDNTCU7gMZE

2 All broadcast citations from the WGN radio broadcast are from: John Mongani, “Harry Caray’s Call of the Sandberg Game vs Cards.” YouTube video, 41:28. Uploaded January 11, 2014. https://www.youtube.com/watch?v=34mz7wQKTB0