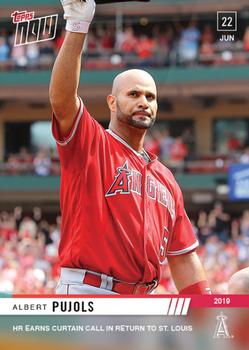 “This is probably one of the best moments of my career. I’m going to put it up there with two World Series championships,” Albert Pujols said in an on-field interview after the game.1 As fans slowly filed out of Busch Stadium after a home loss, Pujols stood on the third-base line taking a final look at the ballpark. He was eight years and 2,000 miles removed from the Cardinals organization, and no one ever thought they’d see him play ball in St. Louis again.

As an aging veteran at the tail end of his contract, this interleague contest marked the last day Pujols would play in Busch Stadium. Unless the two teams met in the World Series, this was his final farewell.

Pujols played with the Cardinals for over a decade, batting .328 and belting a remarkable 445 home runs. He won three MVP Awards, three pennants, and two championships, on top of many other accolades including Rookie of the Year in 2001 and Gold Glove Awards in 2006 and 2010. It was clear that the 47,114 fans who showed up that evening weren’t there for the Cardinals — they were there for Pujols.

The previous two games in the series had Pujols at 2-for-6 with a home run, so the crowd had high hopes to witness another glimmer of greatness from their former star. Though the 39-year-old was batting a dismal .233 so far in 2019, his past success with the Cardinals was enough to maintain the crowd’s respect and resounding applause as his name was announced over the loudspeaker.

Taking the mound for the Cardinals was Miles Mikolas, hosting an unspectacular 5-7 record. With runners at the corners in the first inning, the fans welcomed Pujols to the game with a standing ovation until his former teammate Yadier Molina gave Mikolas the signal to carry on with the game. The fans followed suit and quieted down as Pujols grounded out to end the inning.

After a leadoff walk in the top of the third, second baseman Kolten Wong converted a quick double play deserving of a career highlight reel. Without fully gloving the ball, he lightly pushed his glove toward shortshop Paul DeJong, who recorded the force out at second, then converted the double play. DeJong was a finalist for a Gold Glove by the end of the season, and Wong won one. The Wong-DeJong duo may have possibly been the best middle infield in the league.

The crowd’s cheers for Wong’s athleticism behind second base only grew as Pujols once again stepped up to bat. Pujols pulled a breaking ball into left field, singling for the loudest hit of the ballgame thus far … and it wouldn’t be his last. He singled again in the seventh inning, but his teammates would never be able to bring him home.

Pitching for the visiting team was lefty Tyler Skaggs. Skaggs was selected in the first round of the 2009 draft by the Angels and made his major-league debut with the Diamondbacks in 2012. He was traded back to the Angels in 2013 in a three-team deal. Coming off his best game of the season, in Toronto, Skaggs had more wins than any other pitcher on the Angels roster. He earned another win against the Cardinals, pitching five scoreless innings with three strikeouts, improving his record to 7-6.

It was his final win before he tragically died in his sleep eight days later.2

Miles Mikolas took the loss after surrendering a run through five innings. Giving up seven hits and two walks, Mikolas should be satisfied the score wasn’t worse. On a personal high note, he earned a hit himself in the game, his third of the season. He finished the season with a losing 9-14 record.

Japanese prodigy Shohei Ohtani made a pinch-hit appearance for the Angels in the sixth inning, hitting a single to right to load the bases for Tommy La Stella. La Stella got a hit, but the Angels scored only one run when Luis Rengifo tripped on the basepaths and was thrown out at home.

The ninth inning was one for the ages. With the bases loaded, Pujols stepped up to the plate. Knowing this could be the former Cardinal’s last at-bat in Busch Stadium, the crowd rose to cheer him. Molina stepped away, allowing Pujols to tip his helmet to the crowd as the ovation kept going.

After minutes of cheers, the crowd quieted for the delivery. In silence, ball one was thrown. Then strike one. With the count even, fans started chanting “Albert! Albert!” in unison. Thousands of cameras fixated on home plate, capturing the final at-bat of Pujols’ long career in Busch Stadium.

Cardinals pitcher John Gant must have been a bit frustrated that his home crowd was cheering for the visiting batter. What kind of home-field advantage was this? However, in the back of his mind, he must have known this moment was a testament to what St. Louis baseball fans were like – undyingly loyal to their heroes. Maybe he would be one someday.

With the Angels leading 1-0, the bases loaded, the count on Pujols 3-and-2, anticipation filled the ballpark. As the final pitch was delivered, the crowd groaned as they heard the crack of the bat. Pujols flied out weakly to first base in the most anticlimactic fashion.

This marked the end of an era.

The fans gave Pujols a standing ovation as he trudged back to his dugout, but not before making a point to embrace Molina. He reappeared for a curtain call. Fans roared their approval as tears collected in Pujols’ eyes.

Who had ever heard of a curtain call after an infield popout?

As fans rushed for the exits after seeing Pujols for the last time, Gant could breathe a little easier having retired a home-run threat with the bases loaded. But he surrendered four runs before being relieved, inflating his 1.54 ERA to 2.54. The score was 6-0.

The Cardinals offense wasn’t giving up, though. With two outs in the bottom of the ninth, they started crawling out of their 6-0 hole. Jose Martinez homered, making the score 6-1. Fireworks popped in the sky, though everyone knew it was a desperate attempt to manufacture hope. After another few hits, the Cardinals chipped their way back to make the score 6-4. It was as if fate was at work to give Pujols another plate appearance in a 10th inning.

The few remaining fans in the ballpark buzzed; it looked as though the Cardinals might complete a tough comeback. With the go-ahead run at the plate, the crowd sighed as the ninth-inning rally was cut short by DeJong’s soft grounder.

After the game, veterans Pujols and Molina strode across the diamond to meet each other for a final embrace. The longtime teammates and friends posed for a photo holding each other’s jerseys. It was a symbolic snapshot for baseball. Despite any trades, contracts, legalities, and competition, teammates still remained dear friends, and the loyalty between them ran thicker than blood.

Pujols had a storied history with this fan base. He was celebrated as a player, brutally ridiculed when he switched teams, but received a hero’s homecoming eight years later. The mutual respect and memories shared between Pujols and the Cardinals was deep. “These fans are unbelievable. I love them,” Pujols said.3 He walked off the field for the last time, waving to the few cheering fans who remained. After all these years, Pujols’ story with the Cardinals had at last come full circle.

I grew up watching Pujols play, and attending this game gave a very unique and rare experience. Sitting only a few rows back from Pujols as he took his last swings is a memory I’ll never forget. For just a few minutes, this was no longer a summer interleague series; the entire ballpark stood frozen in time 10 years ago, during the glory days of Tony La Russa, Adam Wainwright, Molina, and, of course, Pujols. The fans felt it too. This was a night of nostalgia that beautifully underscored the timeless quality of the game of baseball.