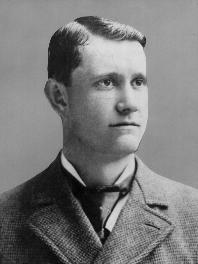 Coming off a third-place finish in 1900, the Philadelphia Phillies faced a threat in the coming season not from the Brooklyn Superbas or Pittsburgh Pirates, but from a new ballclub in the City of Brotherly Love. Ban Johnson had placed a franchise in Philadelphia in his new American League, and the Phillies’ star second baseman, future Hall of Famer Napoleon Lajoie, turned down a salary increase and joined the Philadelphia Athletics.

Lajoie’s epochal 1901 season helped the new Athletics draw nearly as many as the Phillies; the Phils led the 1900 NL in attendance (with 301,913) but slipped to fourth the next season.1 Minus Lajoie, second base remained an issue for the team and Joe Dolan was released on May 3 after starting the season 3-for-37.2

The Phillies lost nine of 13 on a road trip in early June. “The Phillies, after playing ball that was strictly gilt-edged before starting on their Western trip, began to fall back steadily on the trip, and so far they have failed to show anything like the form expected at home,” the Inquirer lamented as they began a homestand. “There has been an unexpected slump in their hitting, and their fielding at times has been something weird.”3

To the surprise of many, the Phillies purchased future Hall of Famer Hugh Jennings from Brooklyn on June 20 for $3,000.4 Jennings had refused to report to the Superbas that spring while studying law at Cornell. While he had indicated he wanted to return to Baltimore playing for John McGraw’s new AL team, his acquisition by the Phillies led local sportswriters to conclude that the deal had been arranged in advance.

On June 24, with the mercury hitting 88 degrees at 3:30 P.M., a reported 5,000 fans went to National League Park for a doubleheader against Cincinnati. The Phils had little trouble dispatching the Reds in the first game, with Ed Delahanty leading the offensive assault with a two-run homer in the fourth inning (over the right-field fence). Bill Duggleby scattered 10 hits in the 8-0 shutout, with the Public Ledger praising his speed and command “which, together, pulled him out of a number of nasty places.”5

The Phillies displayed even more dominance at bat and on the mound in the nightcap, thrashing Cincinnati 19-1 in what was their largest margin of victory since September 1894 (when they defeated the St. Louis Browns, 21-1). The Reds helped matters by committing nine errors in the game — “the whole crowd fell down back of Phillips in the second game,” according to the Inquirer6 — while the Phillies played errorlessly. Reds outfielder Sam Crawford was charged with three miscues. “Better wake up, ‘Wahoo,’” chided the Cincinnati Enquirer.7

A later Phillies history would note, “‘Doc’ White was destined for a career of stardom, but alas for Philadelphia fans, most of it was with the Chicago White Sox.”8 However, White had a moment in the spotlight for the Phils in that second game. “White must have been jealous of Del’s home run,” the Bulletin quipped,9 as the pitcher slammed his first career home run off Bill Phillips in the second game.10

“To describe the run-getting of the Phillies would be tiresome,” wrote the Philadelphia Times.11 Opined the Inquirer, “Hit followed hit with such regularity that any other kind of a play was welcomed as a change.”12 The Phillies confined their scoring to just five innings, including a six-run fourth and a five-run seventh. Reporters preferred to describe the Reds’ lone score of the afternoon, in the fifth inning, rather than any of the Phillies’ innings. “[W]ith (Bill) Bergen on first and (Charlie) Irwin on third with two men out,” the Cincinnati Enquirer recounted, “(Klondike) Douglass threw to (Monte) Cross off Bergen’s steal, with the idea of enticing Irwin home, so that he could be caught at the plate. Cross was fooled by Irwin’s stopping half way, and in trying to stop the flying Bergen turned too late to head off the too foxy Irwin before he had reached the plate.”13

The Press quipped that after the game, Phillips “strolled out Chestnut Street (…) with a pipe between his teeth. There was tobacco in the briar, but the plug cut was unlit. ‘Bill’ wanted to smoke but he didn’t have the energy to strike a lucifer.”14

Curiously, the only Phillies player to not get at least two hits in the second game was Hughie Jennings. While his early play did not draw praise (Sporting Life wrote, “Hugh Jennings’ batting eye is not quite as bright as it should be for a ‘$6,000 beaut’”15), his addition to the Phillies coincided with their rise in the National League standings. Philadelphia, 24-24 when Jennings joined the club, went 59-33 the remainder of the season to finish in second place, only 7½  games behind the pennant-winning Pirates; it was their closest finish to first place since 1887, and the Phillies would not exceed their .593 winning percentage until 1916. More relevantly, they outperformed the upstart Athletics (who finished 74-62).

The Reds, in contrast, were in decline. “The Cincinnati Club deserves a better fate,” Sporting Life mourned. “The palace of the fans [sic] is nearing completion, but unless there is a brace in the team’s play the cranks wouldn’t go out and sit in diamond encrusted chairs unless the management provided them with picks to pry out the jewels.”16

10 While the SABR Home Run Encyclopedia lists White’s home run as occurring in the seventh inning, the Bulletin game notes state that it took place in the fourth inning.