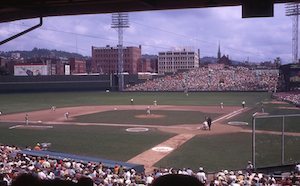 In the pregame ceremony for the final contest at Crosley Field, Dayton Daily News sportswriter Si Burick provided the epitaph for the venerable home of the Cincinnati Reds, concluding with “Rest in peace.”1 However, his final words turned out to be a bit premature, since the Reds would pull out one more victory from its bat rack by defeating the San Francisco Giants, 5-4.

Indeed, the closing of the ballpark ended on a high note, the way its opening began 58 years earlier. Formerly named Redland Field, Crosley Field hosted its first major-league game on April 11, 1912, when the Reds defeated the Chicago Cubs 10-6. The ballpark was renamed Crosley Field in 1934 after Powel Crosley Jr. became the new owner of the Reds.

Going into the June 24 game, the Reds were riding high with a nine-game lead over the Los Angeles Dodgers in the National League West Division. Their nickname might well have been “Red-Hots,” because they had been in first place since the beginning of the season except for one day in early April. The Giants, who had won 90 games the year before, were 32-36 for the year, 15½ games back of the Reds.

The Giants’ lineup featured Willie Mays, Willie McCovey, and Bobby Bonds, although they were at three distinct points in their careers. Mays, at 39, was clearly on the downside of his stellar career; his power numbers had declined significantly since his prime years. Combining power and speed, Bonds was just emerging as one of the game’s best leadoff hitters. The 32-year-old McCovey’s career was at its peak, since he had led the National League in home runs and RBIs in the past two seasons.

The Reds’ roster in 1970 was in the initial stages of what would become one of the most feared modern-day dynasties. At its core, the lineup included Pete Rose, Tony Perez, and Johnny Bench, and they were complemented by Lee May, Bobby Tolan, Bernie Carbo, and Tommy Helms. Collectively, these players, as well as future additions including Joe Morgan, Ken Griffey Sr., George Foster, Cesar Geronimo, and Dave Concepcion, became known as the Big Red Machine for their dominance (including four World Series appearances) during the 1970s.

Reds manager Sparky Anderson went with Jim McGlothlin as his starting pitcher. The Reds had acquired the five-year veteran from the California Angels during the winter and were being rewarded with his best-ever start to a season. The right-hander had won his last seven decisions and 10 games altogether.

The Giants countered with 32-year-old Juan Marichal, the ace of their staff since 1963. However, the eight-time All-Star, whose trademark delivery featured a high leg kick, was suffering a rough patch, having won only three of his first nine decisions.

A crowd of 28,027 was on hand for the Wednesday night game, a better turnout than usual, since the Reds had averaged 15,850 in attendance in the 34 dates at Crosley Field.2

Right out of the gate, the Giants jumped on top with a run in the top of the first. A walk to Bonds, a sacrifice bunt by Tito Fuentes, and a single by Mays scored the speedy Bonds.

The Reds countered in the bottom of the second with two runs. Bench singled, May doubled, and Carbo walked to load the bases. Helms grounded to short for a force out at second base that scored Bench. Woody Woodward then reached first base on a throwing error by second baseman Tito Fuentes, and May scored.

The Giants evened the score, 2-2, in the top of the third, again with the benefit of Bonds’ baserunning skills. He singled, stole second base, and scored on McCovey’s single to right field.

The game had a dramatic moment in the bottom of the third. Tolan led off by beating out an infield hit on which Marichal argued he had beaten Tolan to the bag. Marichal then picked Tolan off first and yelled at Tolan as he left the field, “You were out the first time.” Tolan didn’t take too kindly to the comment. They exchanged heated words, and Tolan even took a few threatening steps toward Marichal before being restrained. From that point on, Marichal was booed by the crowd at practically every turn.3

The Giants added two more runs in the top of the fourth. A double by Al Gallagher and two walks loaded the bases with none out. Singles by Marichal and Fuentes each drove in a run.

With the Reds trailing 4-2 in the bottom of the fifth, Rose provided some excitement when he hit a ball that struck Marichal in the leg and rebounded into short right field. Rose, in his usual “Charlie Hustle” mode, stretched the hit to a double. When Tolan then hit a single, Rose ran through third-base coach Alex Grammas’s stop sign and scored the Reds’ third run. Rose joked after the game, “That was no stop sign. Just a yellow caution sign.”4

As Bench walked to the plate to lead the bottom of the eighth, Sparky Anderson cautioned him, “Don’t go up there swinging for a home run now.” But Bench didn’t heed the advice and walloped a home run over the Mountain Dew sign atop the scoreboard in left-center to tie the game.5 May followed with a blast off Marichal that didn’t have as much distance as Bench’s clout, but cleared the wall in straightaway center field, giving the Reds a 5-4 lead.6

Wayne Granger, who had relieved McGlothlin in the top of the eighth, retired the Giants in order in the top of the ninth to cinch the Reds’ victory and bring a happy closure to the ballpark. In describing the atmosphere after the game, Granger said, “I was never so excited in my life. Not even when I was with the Cardinals in the 1968 World Series. I’ve been looking around wondering where the champagne is.”7

Marichal took the loss for the Giants, yielding five runs on 10 hits, while striking out four, in seven innings pitched. Don McMahon pitched one scoreless inning for the Giants. In two scoreless innings in relief of McGlothlin, Granger got the victory for the Reds, improving his record to 3-1. McGlothlin gave up four runs on seven hits and five walks in his seven innings pitched.

Sparky Anderson offered his thoughts about the crowd that attended the game: “That crowd was a tribute to a lot of people. People like Pete Rose and Ted Kluszewski and Wally Post. They came out as a tribute to them. It’s like Wally said. He came because he wanted to see the old park packed one more time.”8

Crosley Field had been the playground for noteworthy Reds players like Johnny Vander Meer, Ernie Lombardi, Bucky Walters, Frank Robinson, Vada Pinson, and Ted Kluszewski, as well as several of the current Reds stars. Top moments in the history of the ballpark included World Series championships in 1919 and 1940, the first major-league night game in 1935, and Ewell Blackwell’s brush with fame in 1947 by nearly pitching a second consecutive no-hitter (broken up in the ninth inning).

Asked about his top memory of Crosley, Pete Rose recalled his 5-for-5 day against Gaylord Perry in 1968 to beat out Matty Alou for the batting title. “I never had any success with Perry before that,” Rose said. “And I got four of my hits off Perry’s ‘secret’ pitch.”9

As is often the case after the retirement of a ballpark, baseball history buffs like to account for the “lasts” that occur in the final game. For Crosley, the last pitch was thrown by Wayne Granger, who also got the last pitching victory. The last hit, which was also the stadium’s last home run, was recorded by Lee May. The last out was made by Bobby Bonds.

After a three-game road trip to Houston, the Reds played their next home game on June 30 in their new ballpark, Riverfront Stadium.

Following the lead of the Houston Astros with the Astrodome, the move to Riverfront Stadium occurred at a time when multipurpose stadiums featuring artificial turf were being built for major-league clubs: Pittsburgh’s Three Rivers Stadium in 1970, Philadelphia’s Veterans Stadium in 1971, and Atlanta-Fulton County Stadium in 1976.

Crosley Field was the birthplace of Cincinnati’s Big Red Machine. The outdated ballpark gave way to the contemporary Riverfront Stadium, where the dynastic team would further mature and flourish during the rest of the decade. Once the shining example of new-style concrete-and-steel stadiums, Crosley Field served the baseball community well during some historic times — from the end of the Deadball Era, through the game’s Golden Age, and leading up to the next era of modern-day ballparks.