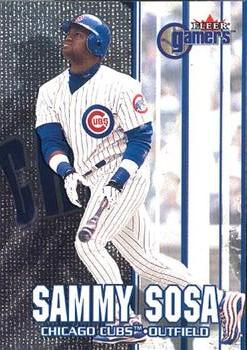 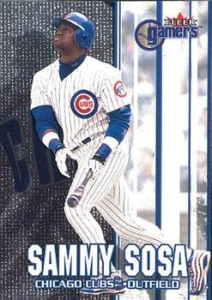 As members of the Society for American Baseball Research descended on the Sheraton West Palm Beach Hotel for SABR’s 30th annual convention, the Chicago Cubs came to town in a “circus-like” atmosphere to face off against the Florida Marlins. The South Florida Chapter of SABR was busy preparing for the first-ever SABR convention in Florida, which drew more than 300 members and guests, focusing on baseball in Florida and the Caribbean, with panels highlighted by Hall of Famers Tony Perez, Monte Irvin, and Marlins Executive Vice President and general manager Dave Dombrowski. The star slugger of the Cubs, Sammy Sosa, was preparing for a possible trade from the franchise where he had become an international phenomenon. Both parties would be in South Florida for the weekend, and both made headlines with their appearances.

The South Florida Sun-Sentinel said, “[T]he convention will be a five-day fiesta of facts, an all-you-can-eat buffet of insights and analysis for those with a seemingly insatiable appetite for anything baseball,” calling SABR members “A-listers in the Rolodexes of many sports reporters, commentators, team owners, investors and academics.”1 The Palm Beach Post published a front-page story, complete with a cartoon announcing the arrival of SABR and declaring, “Baseball trekkies invade West Palm to discuss graves, ejections, trivia, and, naturally, Fred Mertz.”2

Amid swirling trade rumors in late June, Sosa and his Cubs teammates rolled into Pro Player Stadium on Saturday night staring at a 30-42 record. Earlier on that Saturday, Sosa received an honor on famed Calle Ocho for his contribution in the Spanish international community.3 Sosa, only two years removed from the home-run summer of 1998 and his MVP season, faced more questions as rumors of a possible trade to the Yankees or Red Sox persisted throughout the weekend.4 The Cubs were looking to capitalize on his incredible trade value. Players having back-to-back seasons of more than 60 home runs rarely exist in baseball history, let alone one such slugger, in his prime, on the trading block. Whispers of a possible return of seven or more players for Sosa and teammate Ishmael Valdez made the rounds,5 and teammates of Sosa, as well as Cubs manager Don Baylor, were growing weary of the consistent trade talk. When Baylor was asked if he would get tired of the trade rumors by July 31, he responded “how about June 24?”6

Despite the trade talk and a below-average team, Marlins and Cubs fans alike flocked to the Saturday night showdown, which featured a “Floppy Hat” giveaway for the first 15,000 fans. The Marlins were averaging just a bit under 15,000 fans a game, but the crowd would turn out to be the second largest of the season, at 35,140, in hopes of getting a hat and watching Sosa hit a home run.7 On the mound for the Marlins was Chuck Smith, a career minor leaguer who had made only two previous starts in the majors before he took on the Cubs. Smith had earned the respect of his teammates earlier in the week when he intentionally hit Milwaukee Brewers outfielder Jeromy Burnitz with a fastball as retaliation for Marlins outfielder Cliff Floyd being hit by a pitch in the previous inning.8

While the Marlins turned to Smith, a 10-year veteran of the minor leagues, the Cubs looked to Kevin Tapani, pitching in his 12th major-league season. Smith would face a lineup featuring veterans Sosa, Mark Grace, and Eric Young Sr. Tapani would be looking at a Marlins lineup featuring young, promising hitters Luis Castillo, Preston Wilson, and Derrek Lee.9

Leadoff batter Castillo, who would lead the major leagues with 62 stolen bases in 2000, entered the game hitting .365, after having a four-hit performance the night before against Cubs starter Jon Lieber in a 6-1 Marlins win. Facing Tapani, Castillo led off with a bunt single, which would be his only hit for the night. Tapani pitched well, striking out nine and giving up only two earned runs over seven innings. Both runs came on solo home runs, one by Preston Wilson to lead off the fifth inning and the other by Derrek Lee in the bottom of the seventh inning. The Cubs bullpen came on in the eighth to preserve the win for Tapani.

For his part, Smith matched Tapani, surrendering only one run through his first six innings, but he ran into trouble in the seventh, giving up a leadoff double to the number-eight hitter, Jose Nieves, who went 3-for-4. Nieves advanced to third on a sacrifice by Tapani. A single by Eric Young Sr., who also went 3-for-4, drove in Nieves to give the Cubs a 2-1 lead. Ricky Gutierrez’s single put runners on the corners for Sosa, and with a 3-and-2 count, Sosa lifted a run-scoring fly ball to left field, giving the Cubs a 3-1 advantage. The next batter, Mark Grace, grounded out to third, ending the seventh and Smith’s night. He had given up three earned runs.

Derrek Lee’s home run in the bottom of the seventh inning brought the Marlins within one run, but the Cubs responded in the eighth with a double to right-center by Jose Nieves that scored Gary Matthews Jr.  to restore the Cubs’ two-run advantage.

In the bottom of the eighth inning, Don Baylor turned to Tim Worrell to face the bottom of the Marlins order, and despite giving up a double to Dave Berg, Worrell retired two of the three hitters he faced. Baylor turned to former Marlins lefty Felix Heredia to face left-handed-hitting Mark Kotsay in hopes of recording the final out of the inning. The lefty-lefty matchup did not work out in the Cubs’ favor, as Kotsay singled to center, driving in Berg and making the score 4-3, Cubs. Baylor stuck with Heredia to face another Marlins lefty, outfielder Cliff Floyd, and Heredia walked Floyd on five pitches. After that, Baylor went back to his bullpen and called on Rick Aguilera to face Preston Wilson and preserve the one-run lead. For the third consecutive hitter, the bullpen failed, as Wilson lifted a 2-and-0 pitch out for a three-run home run to give the Marlins the lead. On the next pitch after Wilson’s home run, Lee homered again, going back-to-back with Wilson and extending the Marlins’ lead to 7-4. That was all Marlins closer Antonio Alfonseca would need, as he worked an eight-pitch ninth inning to get the save and bring the Marlins record to 37-38, securing Marlins reliever Joe Strong’s only career win in the process.

On this Saturday June night, SABR 30 and the Sammy Sosa sideshow were all witnesses to a meltdown of the Cubs bullpen, and a come-from-behind win for the home team. After the game, the SABR members who attended boarded their bus for the trip north back to West Palm Beach, eager for the last day of the convention, leaving behind the Marlins and the three-ring circus that was Sammy Sosa and the rest of the Chicago Cubs.10 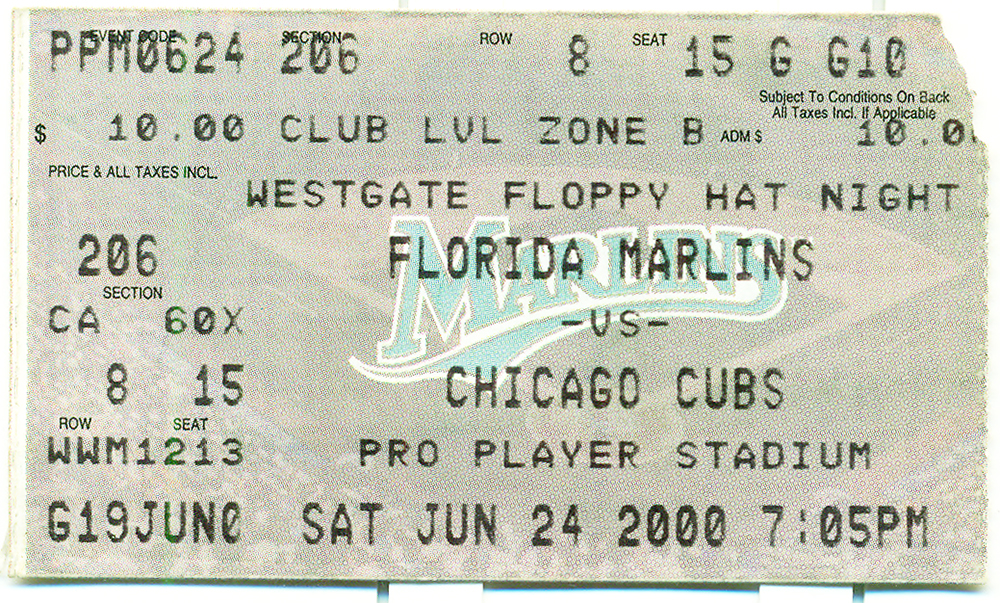 In addition to the sources cited in the Notes, the authors consulted Baseball-Reference.com and SABR.com.

1 Cindy Glover, “Baseball Buffs in a League of Their Own,” South Florida Sun-Sentinel (Fort Lauderdale), June 22, 2000.

10 Sosa was not traded and remained with the Cubs through the 2004 season.