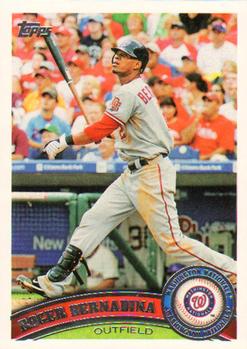 Washington Nationals manager Jim Riggleman had resigned the day before in a contract dispute. He had given an ultimatum to general manager Mike Rizzo: “Exercise my 2012 option or I’ll resign.” Rizzo had told Riggleman, “We will not discuss your option during the season.” Rizzo ignored the ultimatum, Riggleman resigned, and Rizzo appointed bench coach John McLaren as interim manager.1 This was not the first time McLaren had been appointed after an abrupt resignation: In 2007 he was appointed manager of the Mariners when Mike Hargrove resigned.2

The Nationals (38-37), for the first time in a very long time, were on a roll. They had won 11 of 12, working their way up from fifth to third in the NL East although they were still 8½ games back of Philadelphia. With a similar record (37-39), the White Sox were also third in the AL Central Division, but only 4½ games back of Cleveland.

Edwin Jackson (4-6, 4.47 ERA) started the game for Chicago with a strikeout of slumping Jayson Werth (.182 BA to date in June). Roger Bernadina’s fly out and Ryan Zimmerman’s strikeout completed a quick inning.

Jordan Zimmermann’s (5-6, 3.08 ERA) first inning was not so smooth. He walked Juan Pierre. Brent Morel singled to right fielder Werth, who bobbled the ball, and there were runners on first and third. But Alexei Ramírez grounded back to Zimmermann and Paul Konerko lined out to third, giving Zimmermann a chance to get out of the inning with no damage. He struck out Adam Dunn, his former teammate, to strand the baserunners.

After Laynce Nix flied out in the second, Michael Morse got the Nationals’ first hit, a double down the third-base line, almost hitting the ballgirl. But he was left on second when Danny Espinosa and Wilson Ramos struck out.

Zimmermann faced runners on first and third again in the bottom of the second but again escaped when Pierre grounded out.

Jackson allowed only a leadoff single in the third. All that happened in the bottom of the third was Ramírez losing his bat into the crowd, injuring a fan.

In the fourth inning, Jackson issued a two-out walk to Morse, who advanced to third on Espinosa’s single. Jackson struck out Ramos to prevent any scoring. Although Zimmermann allowed a one-out single to Álex Ríos, he was erased on a double-play ball hit by A.J. Pierzynski.

The Nationals threatened, but did not score, in the fifth. Jerry Hairston Jr. singled. With Ian Desmond batting, the White Sox tried a pitchout but the throw was offline. After Desmond sacrificed Hairston to third, Werth grounded to the shortstop, and the White Sox got the out at home. Werth stole second but Bernadina struck out.

Facing the bottom of the White Sox order in the fifth, Zimmermann got three outs on nine pitches.

Each pitcher allowed only a one-out single in the sixth. Dunn almost homered, but Bernadina timed his leap at the wall to bring the ball back and end the inning, much to the annoyance of the fans who thought they were getting a souvenir and the lead.

Both starters finished their outings in the seventh. All Jackson allowed was a walk. He had a few complete games in his eight-year career, but at 106 pitches he was unlikely to be good for another inning. Zimmermann allowed a single and hit Brent Lillibridge with a pitch. He had yet to pitch into the eighth inning through his third year in the majors.3

The Nationals finally broke the string of zeros in the top of the eighth. Bernadina bunted past Chris Sale, the new pitcher. He stole second but could have stayed put. The White Sox’ next pitcher was former National Brian Bruney. Morse greeted him with a two-out homer to give the Nationals a 2-0 lead. Espinosa struck out.

Two quick outs in the bottom of the eighth and chaos ensued. With Henry Rodríguez pitching, Konerko grounded to Desmond. Desmond’s throw pulled Morse off the bag but Morse, on the ground, reached back and swiped his glove toward Konerko’s leg as he leapt for the base to avoid the tag.4 First-base umpire Mike Estabrook called him out. Konerko went wild; crew chief Jeff Nelson convened the umpires; Chicago manager Ozzie Guillén told Konerko to stand on first; Nelson called Konerko safe; Hairston yelled from the dugout, got tossed, ran on the field trying to tackle an umpire (but was restrained by first-base coach Bo Porter); all while McLaren argued and got himself an automatic ejection for touching an umpire’s cap. Whoever was now managing the Nationals5 called on Sean Burnett to pitch to Dunn, who grounded out to end the inning.

The Nationals added to their lead in the top of the ninth. Ramos walked, was sacrificed to second, and scored while Desmond got himself caught in a rundown.

With a 3-0 lead, Drew Storen was looking for his 19th save in the bottom of the ninth. He didn’t get it. Pierzynski and Lillibridge hit one-out singles. Pinch-hitter Mark Teahen tied the game with his first pinch-hit home run. Pierre and Morel grounded out but the game was headed to extra innings, tied 3-3.

Nix untied the game in the Nationals’ 10th with a one-out solo homer. Morse made it as far as third after being hit by a pitch and advancing on Espinosa’s single. Ramos grounded into a double play so Morse held — and was left there when Brian Bixler flied out.

Now it was up to the sizable reliever, Todd Coffey, to hold the 4-3 score. He did not have much experience closing: He had finished some games in 2011 but none of them save situations.6 He issued a one-out walk to Konerko, who was replaced by pinch-runner Omar Vizquel. Dunn doubled; Vizquel held at third but scored on a wild pitch, tying the game, 4-4. The Nationals intentionally walked Pierzynski to load the bases — but they escaped the inning with the tie intact when Lillibridge struck out and Teahen fouled out.

All Jesse Crain allowed in the top of the 11th was Bernadina’s single.

Ryan Mattheus held the score tied in the bottom of the 11th, although he did allow a single to Ramírez.

The Nationals took the lead again in the top of the 12th. Nix singled. After Morse and Espinosa struck out, Ramos singled into center, allowing Nix to take third. Nix scored on Bixler’s double over right fielder Lillibridge’s head. Despite the double, the Nationals held Ramos at third. The trainer came out to check on his hamstring. Desmond flied out but the Nationals had a 5-4 lead.

Now it was Tyler Clippard’s turn to try for a save in the 12th. The statistics were not promising: He had no saves and three blown saves in 2011.7 He got close, but Pierzynski, on an 0-and-2 count with two out, homered well into the right-field stands to tie the game for the third time.

Crain warmed up in the top of the 13th, but Guillén changed his mind, calling in Matt Thornton, the White Sox’ last available reliever. Werth struck out for the fourth time. Bernadina singled and reached second on Vizquel’s only 2011 error. Zimmerman was walked intentionally but Nix struck out and Morse grounded out to leave the score tied, 5-5.

The Nationals also tapped their last reliever, Collin Balester, in the bottom of the 13th. He allowed no baserunners.

Since their relievers apparently couldn’t hold a one-run or a three-run lead, the Nationals tried scoring more in the top of the 14th. It wasn’t a promising start: Espinosa, batting right-handed, grounded out on the first pitch. Ramos struck out. Bixler got a broken-bat single, just beating the play at first — at least that’s how it was called. With Desmond batting, Bixler stole second, scoring on an error by shortstop Ramirez (a low throw to first that went to the side wall). Werth (1-for-7 with four strikeouts) was intentionally walked to bring up Bernadina (3-for-5 with one strikeout). Bernadina’s bat had one more hit in it: His fourth single of the game scored Desmond. It was 7-5, Nationals. Zimmerman doubled to score two more: 9-5. Nix struck out but the drama wasn’t over: Would the Nationals blow a fourth lead in one game?

In the home half, Vizquel hit a one-out single into center off Balester’s glove. Dunn followed with a base hit, cheered by the substantial number of remaining fans just as Friday turned to Saturday. With the tying run in the on-deck circle, Ríos got the fans’ hopes up with a home-run-distance foul. They were disappointed: He grounded into a double play to end the game.

The Nationals, now winners of 12 of 13, wildly celebrated their multi-comeback victory in the visitors clubhouse unconcerned for the moment about the state of their management.8 Davey Johnson arrived shortly, ending the McLaren era with a 2-1 record. The Nationals finished third in the NL East at 80-81, a significant improvement over their previous year’s fifth-place finish on their way to their first division title in 2012.

The White Sox also finished third and had a change of manager during the season.9

In addition to the sources in the Notes, the author viewed the recorded game at youtube.com/watch?v=qUIncVHinlc.

3 He did go eight innings in his next start, but didn’t reach the eighth again until the 2013 season.

4 There was no replay for this type of play in 2011. With replay, the “out” call probably would have stood because the video from all angles is not clear enough to be sure that Morse’s glove didn’t touch Konerko’s leg. Konerko probably wouldn’t have felt a tag.

5 Who was in charge was not immediately clear. Trent Jewett was the interim bench coach, but had not been part of the in-game coaching staff to that point in the year. So Jewett was the interim interim manager, but third-base coach Porter would assist with offensive decisions while pitching coach Steve McCatty would assist with pitching decisions. Mark Zuckerman, “Tales from the Clubhouse: The John McLaren Era,” masnsports.com, May 11, 2020. masnsports.com/nationals-pastime/2020/05/tales-from-the-clubhouse-the-john-mclaren-era.html. Retrieved June 8, 2020.

9 With two games left in the season, and unable to reach a contract agreement, Guillén was released by the White Sox and replaced for the last two games by the pitching coach, Dan Cooper. “Source: Marlins to Hire Ozzie Guillén,” espn.com, September 26, 2011. espn.com/chicago/mlb/story/_/id/7023269/chicago-white-sox-grant-ozzie-Guillén-request-released. Retrieved June 8, 2020.