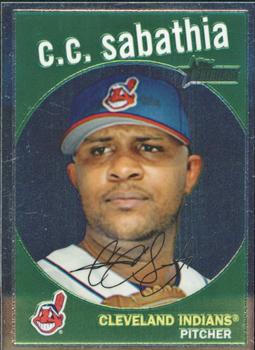 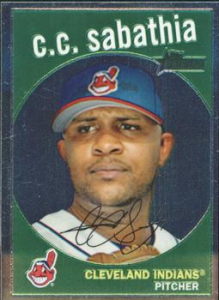 The visiting Cincinnati Reds faced the hosting Cleveland Indians on a rainy Friday night in downtown Cleveland. The teams squared off for the “Battle of Ohio,” which received a new trophy for the 2008 interleague series. The state’s lottery program created a 32-inch-tall trophy for the series winner. The series matchup was tied the previous two seasons;1 the Reds hadn’t won since the inaugural 1997 series when teams met during the regular season for the first time

Both the 36-43 Indians and 36-44 Reds struggled throughout the season’s first half and landed in the bottom portion of their respective divisions. Cleveland was hoping to rebound from dramatically losing the 2007 AL Championship Series in seven games. The Indians dropped to fourth place in the AL Central Division after a mid-April swoon; the pitching matched expectations, but their sputtering offense battled for runs. During an 8-2 stretch in mid-May, CC Sabathia blanked the Oakland Athletics as Cleveland snagged the division lead. Sabathia’s gem was the fifth shutout Indians pitchers delivered in an eight-game stretch.2 Their division lead was short-lived; a seven-game losing streak later that month and a pedestrian June propelled Cleveland to the basement on June 25.3

The Reds weren’t faring any better. Their fans were enduring a lengthy losing spell; the ballclub hadn’t finished above .500 since 2000. The Reds’ last playoff appearance occurred in 1995, when they were swept in the NL Championship Series by the Atlanta Braves. The Reds dropped to last place during a five-game losing streak in early May of 2008, and spent most of May and June in the NL Central Division’s basement.4

Cleveland manager Eric Wedge sent southpaw veteran Sabathia to the mound. The 2007 AL Cy Young Award winner and three-time All-Star carried a 5-8 record and 4.06 ERA into the contest. Amid trade rumors,5 he pitched well during his last three starts: He fired a five-hit shutout against Minnesota, struck out 10 Padres in an eight-inning win, and allowed one run over seven innings against the Dodgers six days earlier. Against Los Angeles, his third-inning solo home run was Cleveland’s only run until the Indians erupted for six 11th-inning runs.6

Cincinnati manager Dusty Baker selected 22-year-old rookie Daryl Thompson as his starter. The right-hander had debuted in the big leagues just six days earlier and threw five shutout innings against the New York Yankees at Yankee Stadium. During his debut, Thompson experienced trouble during the second inning with the bases loaded and no outs. After retiring the Yankees on two strikeouts and a popout, his confidence skyrocketed; after the game he commented, “That boosted me up a whole lot, to be able to get out of the inning.”7 Thompson was ready for this night’s contest, arriving at the ballpark more than five hours before game time.8

Before the game started, 34,844 baseball fans weathered a 61-minute rain delay. The weather threatened to postpone the matchup throughout the night. Cleveland’s grounds crew was prepared to cover the field at a moment’s notice in the early innings.9 During a momentary rain stoppage, Cincinnati leadoff hitter Jerry Hairston Jr. grounded out to third base as the intrastate rivalry renewed. Adam Dunn launched a fly ball to deep center field, but Cleveland’s All-Star center fielder Grady Sizemore jumped into the center-field wall face-first to steal an extra-base hit.10 Ken Griffey Jr. walked and Brandon Phillips singled as Cincinnati created the first scoring opportunity of the game. With little fanfare, Sabathia ended the threat by striking out rookie Jay Bruce on three pitches. Sizemore started the bottom half with a swinging strikeout, then Jamey Carroll and Ben Francisco singled as the home squad now threatened. Like his counterpart, Thompson escaped an early jam as Jhonny Peralta grounded into a 6-4-3 double play to end the inning. In the second inning, Sabathia worked around an infield single. Thompson gave up a leadoff double to Shin-Soo Choo, then got three straight groundouts. Sabathia found his stride in the third, striking out Hairston Jr., Dunn, and Griffey Jr. In the home half, the Indians’ offense got two baserunners with one out but they were stranded. The fourth inning created little action as Sabathia retired another three Reds in order and Thompson allowed a Casey Blake single with two outs before Ryan Garko lined out, ending his 10-pitch plate appearance.

In the fifth inning Cincinnati continued struggling against the commanding Sabathia, who retired the bottom of the order on a line out, strikeout, and groundout. The Indians finally broke the scoreless deadlock with one out in the bottom of the inning when Sizemore launched a line drive into the right-field seats, his 18th home run of the season. Sizemore’s run was the first Thompson allowed in the majors; he quickly recovered as Carroll flied out and Francisco popped out. (Thompson stranded 12 runners over nine innings.11)

Sabathia strengthened as the game progressed, inducing a Hairston groundout in the sixth, then striking out Dunn and Griffey Jr. for the second time. Cleveland’s southpaw had retired 13 Reds in a row. In the bottom of the sixth inning, Thompson returned to the hill, pitching into the sixth inning for the first time wearing a major-league uniform. Leadoff hitter Peralta walked on five pitches and Choo singled. The runners advanced when Thompson uncorked a wild pitch. Blake’s groundball squeezed through the left side of the Reds’ infield; Peralta scored and Choo took third. Bill Bray was summoned to relieve Thompson; Blake stole second base to place both runners in scoring position. Bray struck out Gutierrez looking, then intentionally walked Garko to load the bases. Baker replaced Bray with right-handed specialist Gary Majewski. The Indians responded with Kelly Shoppach’s sacrifice fly, scoring Choo and advancing Blake. Sizemore lined a two-run double to right, and Carroll extended the inning by singling Sizemore home. A groundout ended the rally, and after the five-run outburst, Cleveland led 6-0.

In the top of the seventh inning, Sabathia retired two more batters before Jeff Keppinger singled to left field, giving Cincinnati its first baserunner since the second inning. Sabathia appeared unfazed as he struck out Joey Votto to reach double-digit strikeouts in his third consecutive start. In the home half, David Weathers replaced Majewski and set the Indians down in order on 10 pitches. After allowing only four baserunners through the first seven innings, the Reds started to rally against Sabathia in the eighth. David Ross walked on a full count, Hairston singled, and the Reds had two baserunners for the first time since the first inning. Sabathia squashed the threat by striking out Griffey Jr. looking. In the bottom half, southpaw specialist Jeremy Affeldt replaced Weathers on the mound. Shoppach singled to right field, but the Indians didn’t pad their lead.

Rookie Masahide Kobayashi relieved Sabathia after the southpaw’s dominant four-hit, 11-strikeout performance over eight shutout innings. The first two batters grounded out, but Keppinger singled. (He was the lone Red to have two hits.) On a full count, Kobayaski struck out Votto to end the game with Cleveland the 6-0 winner.

Sabathia’s shutout performance was the last time Cleveland fans watched him pitch at home in an Indians uniform. Six days later under intensifying trade rumors,12 he made his final Indians start in Chicago, when he pitched eight innings with no decision. On July 7 Cleveland traded Sabathia to the Milwaukee Brewers for Matt LaPorta, Zach Jackson, minor-leaguer Rob Bryson, and a player to be named later;13 the trade was completed when Milwaukee sent Michael Brantley to Cleveland in October.14 The Indians dropped their ninth consecutive game the day after Sabathia’s departure.15

Thompson pitched in one more game for Cincinnati in 2008, absorbing the loss in a July 2 contest against the Pittsburgh Pirates. He toiled in Cincinnati’s minor-league system for the next two-plus seasons before returning on May 26, 2011, when he made in his only major-league relief appearance in his final major-league game.16

The Indians dramatically improved during the second half, climbing back to .500 with an 81-81 record that season, finishing in third place, 7½ games behind the White Sox. Cincinnati’s loss dropped the team to a season-low nine games below .500 and 13½ games out of first place, though more turbulent times were ahead.17 The Reds struggled throughout the second half, finishing in fifth place with a 74-88 record, 23½ games behind the Chicago Cubs. Cincinnati may have lost the game and played sub-.500 ball that season, but they defeated Cleveland during their other five matchups to win the 2008 Ohio Cup.