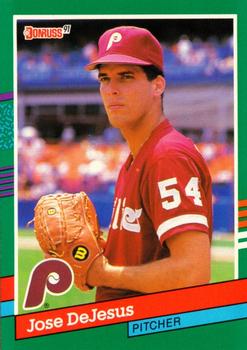 The Philadelphia Phillies were mired in the NL East cellar when they arrived at Shea Stadium for a three-game series against the New York Mets. They were hoping to turn things around after losing their previous five games.

The Mets were 38-32 and 4½ games behind division leader Pittsburgh. They had won four of their previous five, including an eight-inning outing by Ron Darling on June 22 that may have been his best performance of the season.

Bud Harrelson, the Mets manager, was hoping that Darling could have another excellent outing against the struggling Phillies. Darling looked as though he might be on track to do that after he got the Phillies out in order in the top of the first. He threw just 10 pitches and the Phillies failed to hit the ball out of the infield.

But things fell apart for Darling in the second. After he walked John Kruk, Dale Murphy tripled to right field to bring home the Phillies’ first run. A sacrifice fly by Darren Daulton gave Philadelphia a two-run lead. The Phillies would have added to that lead if Kevin McReynolds had not made a leaping catch over the fence in left field.

Darling fared no better when he returned to the mound in the third. Pitcher Jose de Jesus led off with a single. Mickey Morandini’s double put runners on second and third. Charlie Hayes hit Darling’s third pitch over the left-field wall to clear the bases and give the Phillies a five-run lead. McReynolds barely gave the ball a glance as it sailed over the outfield wall and caromed off the sign hanging above the bullpen.

It was the first time Hayes had three RBIs in a game since the end of April. After struggling at the plate, he had been moved up in the batting order by Phillies manager Jim Fregosi, who said, “I thought that with [Wes] Chamberlain, Kruk, and Murphy coming up after him that he’d get better pitches to hit.”1 Hayes’ home run was a relief to the team and himself. “I wasn’t tearing the cover off the ball [so] I don’t have any gripes about [the home run],” Hayes said.2

Darling got Wes Chamberlain to ground out but when Kruk tripled to deep center field, Harrelson yanked him. “His split-finger [Darling’s most important pitch] was hanging like a batting-practice fastball,” the manager said.3

Pete Schourek came in from the bullpen and Murphy hit his first pitch through a hole on the left side of the infield to bring home the Phillies’ sixth run. It would be all they needed.

Darling, for his part, was reticent about his performance. “You make that many bad pitches in two innings, bad things are going to happen. I could have been hurt worse than I was,” he told reporters after the game.4

As Darling was going down in flames, Phillies right-hander de Jesus maintained command over the Mets lineup. Earlier in the day, de Jesus was visiting some of his relatives in Brooklyn when one of them taunted him, “The Mets are hot. The Mets are hot, you’re gonna lose.” He stormed out the room, saying, “Don’t talk to me” because he feared it would bring him bad luck.5

De Jesus, who entered the game with a 4.11 ERA, showed none of the troubles he had finding the plate earlier in the season. After surrendering a ground-rule double to leadoff batter Daryl Boston in the first, de Jesus shut down the Mets until Mackey Sasser’s single in the fifth.

In the middle innings Daulton told de Jesus it was time to work on his offspeed pitch. “OK, Jose, let’s work on the changeup now,” he said. De Jesus had struggled with that pitch all season. When he showed it to Boston in the fifth, Boston started his swing before the ball was halfway to the plate. Brooks was also fooled by the pitch when he saw it in the seventh.6

A single by Mackey Sasser was the only other hit the Mets got off de Jesus until the ninth. The Mets also helped de Jesus by playing sloppy baseball at key times. De Jesus walked Boston to lead off the third inning. When Boston was given the sign to steal, he didn’t get a good jump but ran anyway and was easily thrown out by Daulton.

The Mets finally got on the scoreboard in the bottom of the ninth. Dave Magadan led off with a single. Gregg Jefferies then hit an 0-and-1 pitch over the right-field wall for the only Mets runs. De Jesus regained his composure and got the next three batters out to earn the victory. “Tough to start out 6-0,” Harrelson said, referring to the hole that Darling created with his ineffectiveness on the mound.7

Schourek pitched five solid innings after giving up the inherited run in the third. By the time he was removed for a pinch-hitter in the bottom of the ninth, he had given up just three hits. But his efforts came too late to help the Mets.

“The de Jesus legend lives on. He will be real wild, and so you go up there thinking he’s going to walk you, and then he hits spots with his fastball,” Harrelson said afterward.8 De Jesus expressed satisfaction with his outing: “This was my best game. My composure was nice and calm. … My idea was just be a pitcher, don’t be a thrower.”9

It was de Jesus’s fourth win against the Mets. He scattered four walks in the first complete game of his career. The win raised his record against the Mets to 4-0. The Mets would finally best de Jesus in the last few days of the season when he gave up four runs in the second inning of an eventual Mets victory.

The loss gave Darling a 4-5 record for the season. He was disappointed with the outing, saying, “It’s tough to take. I thought I had decent speed, my fastball was just straight. I can’t pitch with a straight fastball.”10

Darling’s struggles on the mound left many fans wondering how many more games he might pitch for the Mets. Sid Fernandez was scheduled to return from an injury after the All-Star break. Harrelson indicated that Fernandez’s return would move Darling down to the fifth starter on the roster, which could limit how many times he would pitch.

Fans’ questions were answered when the Mets a month later traded Darling to the Montreal Expos along with Mike Thomas for right-hander Tim Burke. The trade did not help the Mets; they finished in fourth place in the National League East Division.

The Phillies savored their win. “This was something we really needed right now,” Fregosi said. He was understating the significance of the win since it was the first complete game by a Phillies pitcher since May 28.11

Postscript: The Mets eventually faded from the playoff picture. After the team went 19-35 in August and most of September, Harrelson was replaced by Mike Cubbage with seven games remaining.

The Phillies’ fortunes improved as the season progressed. They climbed out the cellar to finish into third place in the NL East with a 77-84 record. Under Fregosi, who took over from Nick Leyva when the team was 4-9 early in the season, the Phillies were 74-75.

In addition to the sources cited in the Notes, the author used Baseball-Reference.com and Retrosheet.org for box-score, player, team, and season information as well as pitching and batting game logs and other pertinent material.