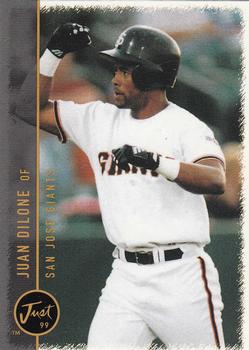 The San Jose Giants won their third consecutive shutout with a decisive 5-0 win over the Lake Elsinore Storm on Sunday, June 28, 1998.1 The Giants tapped four pitchers to capture the win. Scheduled starter Jeff Andra was scratched because of a sore left pitching shoulder. Right-handed reliever Brian Knoll took the mound instead, making his first start of the season. Knoll stayed in the game for 6⅓ innings, giving up six hits and two walks. Lefty Jeff Keith came in to complete the seventh, and right-hander Masashi Kiyono finished out the game in his California League debut.

The afternoon game was played under fair skies, with a temperature of 67 degrees and winds of about 15 mph. The average home-game attendance for San Jose in 1998 was just over 2,000.

The ’98 Giants finished with an 83-57 record, placing first in the Class-A Advanced California League Valley Division and posting the best overall league record. San Jose capped the season by winning the league championship playoffs, the first time since they became a San Francisco affiliate in 1988. They ousted the High Desert Mavericks three games to two in the first round, then topped the Rancho Cucamonga Quakes three games to one in the best-of-five finals. The Quakes had been 77-63, first in their division.

The Giants went on to win league titles again in 2001 (co-champion with Lake Elsinore after the playoffs were cancelled following the 9/11 attacks), 2005 and 2007 (both series against Lake Elsinore), 2009 (vs. the High Desert Mavericks), and 2010 (vs. the Rancho Cucamonga Quakes).

For the Lake Elsinore Storm, the 1998 season resulted in a third-place finish in the Freeway Division, with a record of 66-74 and 11 games behind the division champion Quakes. In 2001, the Storm was declared California League co-champion with San Jose. In 2011, Lake Elsinore won the championship over the Stockton Ports, three games to one. The Storm again made it to the championship series in 2019; however, the Visalia Rawhide won the series three games to one.

In addition to the sources cited in the Notes, the author also consulted thebaseballcube.com, MiLB.com, and weatherunderground.com.