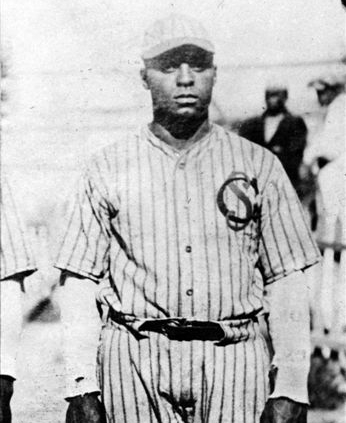 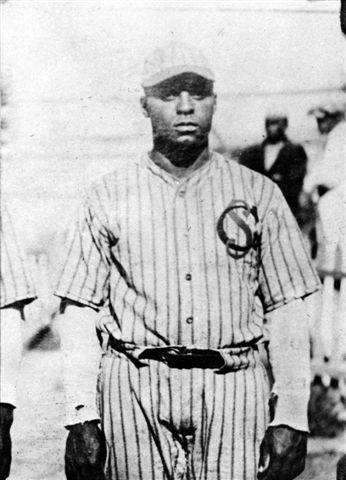 The St. Louis Giants, after playing as an independent team since 1906, joined the newly formed Negro National League in 1920. The Giants’ purchase of legendary outfielder Oscar Charleston from the Indianapolis ABCs helped make them into a winner in 1921 after finishing the Negro National League’s debut season with a 32-40 record.1

The Columbus Buckeyes could also trace their Negro National League lineage to its inaugural year. The team played as the Dayton Marcos in 1920, but new owners moved the team to a larger venue in Columbus for the second season.2 The team’s roster included several notable players. First baseman Bob “Highpockets” Hudspeth and second baseman Clint “Hawk” Thomas held down the right side of the infield.

Hudspeth was just beginning his career, joining the team after playing for Indianapolis in his first professional season. Despite the 6-foot-8 Hudspeth batting just .167 for Indianapolis in 1920, Buckeyes player-manager John Henry “Pop” Lloyd must have seen something in the young player. Hudspeth ended up batting .278 for the Buckeyes in 1921. He would play on various teams through the 1920s.

Thomas was still several years away from reaching his peak. He was shifted between second and third base in 1921 because of his speed. But Thomas never excelled at either position and struggled to turn the double play. It would not be until he joined the Detroit Stars in 1922 and became an outfielder that his career took off: Ultimately he became known as “The Black DiMaggio.”3

Columbus’s biggest star was Hall of Fame shortstop Lloyd. Negro League founder and President Rube Foster persuaded Lloyd to join the Buckeyes as player-manager.4 Despite Lloyd’s hitting – he batted .348 for the season – the team struggled all season and never made it into the top tier of the league.

St. Louis competed with Foster’s Chicago American Giants for the league title all season in 1921. Before the American Giants’ late-June series with Columbus, they split a four-game series with the Kansas City Monarchs. The Giants lost the finale of the series, 6-4, on June 25 before returning home.5

The Buckeyes followed the Giants into Kansas City and were swept in a two-day, three-game series on June 27-28. The Buckeyes were outscored in that series, 21-6, in perhaps a harbinger of what awaited them in St. Louis.6

Columbus and St. Louis started a two-game series with a game at the North Broadway Ballpark on June 29. Right-hander Bill Drake took the mound for the Giants. Drake was their best pitcher in 1921. He would lead the team in innings pitched that season and finish with a 17-13 record.

After Drake retired the side in the first, the Giants wasted no time in providing him with a lead. Columbus started Isaac Lane, who primarily played shortstop for the Buckeyes but was used as a starting pitcher from time to time. In the first inning Doc Dudley beat out a groundball to first when first baseman Hudspeth was slow getting to the base. Sam Mongin bunted to move Dudley up, but pitcher Lane fumbled the ball and both players were safe. Charleston advanced them with another bunt, this one fielded successfully by Lane.

Charlie Blackwell brought both runners home with a double to right. He came home on Joe Hewitt’s single. St. Louis had a 3-0 lead after the first inning.

Columbus scored its only run of the game in the second. After Hudspeth grounded out to short, Thomas hit a double to right. Catcher Fred Williams lined to right, but Blackwell made a “swell running catch.”7 With two outs, George Brown singled to send Thomas across the plate, cutting the deficit to 3-1. Drake dropped in a curve for a called third strike on Koke Alexander to ensure that the Buckeyes would not get any closer.

St. Louis built on its lead in the bottom of the third. Charleston walked and Blackwell followed with a home run over the left-field fence. Hewitt singled and stole second; the St. Louis Argus observed that Hewitt, St. Louis’s shortstop, had been spiked in the first inning and “evidently became peeved at the opposition and got four hits in five times at bat.”8

The Buckeyes went to their bullpen and called on right-hander George Britt to replace Lane. Dan Kennard sent a fly ball to deep center field. Although Brown caught the ball, Hewitt tagged up and scored from second. Britt struck out first baseman Tullie McAdoo and second baseman Eddie Holtz for the final two outs, but St. Louis’s lead was now 6-1.

The Giants were not through with their onslaught. After Drake struck out in the fourth, Dudley walked. Mongin hit a groundball to third. When Sam Dewitt’s throw to second was wild, runners were on first and second. Charleston walked to load the bases.

Britt hit Blackwell to send Dudley across the plate. Hewitt followed with a single, and both Mongin and Charleston reached home. When Britt hit Dan Kennard to load the bases again, the Buckeyes were poised to bring more runners home.

McAdoo’s bunt scored Hewitt. Britt walked Holt to load the bases for the third time in the frame. When Drake was hit with a pitch, Hewitt was forced home. By the time Dudley made the third out, the Giants had scored five runs, pushing the score to 11-1.

Meanwhile, St. Louis maintained its big lead through what the Argus described as “spectacular [defensive] support that caused the splendid week-day crowd to applaud in lusty manner.”9 Dudley in left field and Blackwell in right made “really classy” catches in the early innings.10 McAdoo took a hit away from Thomas on a grounder in the sixth.

The Giants resumed their hit parade in the seventh. Drake and Dudley started the inning with singles. Mongin laid down a bunt and pitcher Britt tagged him out but both runners advanced. Charleston then sent the ball over the right-field wall to add three more runs to the Giants’ total and raise their lead to 14-1.

Kennard started the eighth with an out, but it took six batters before the Buckeyes could get another one. McAdoo doubled. Holt sent the ball down to third but Dewitt bobbled it for an error. Drake singled to plate McAdoo and send Holt to third. Dudley’s single brought Holt home.

Mongin was then hit by Britt to load the bases. Charleston stepped up and hit a two-run single, giving him five RBIs in the game. With runners at the corners, Hewitt’s fly ball scored Mongin. Kennard came up for the second time in the inning. This time he singled to right and earned two RBIs as Charleston and Blackwell raced home. St. Louis scored seven runs in the seventh, giving them a total of 21 for the game.

Drake closed out the Buckeyes to complete the Giants’ one-sided victory. He limited the visitors to six hits.

The two teams played one more game in St. Louis to close out June. The Giants won on June 30 by a score of 8-0.11 St. Louis’s Jimmy Oldham followed Drake’s lead with a two-hit shutout.12 “[T]he locals hit the Ohio twirlers frequently,” the St. Louis Post-Dispatch reported.13

The Buckeyes continued to struggle for the remainder of the season. The team eventually finished with a 30-39 record, seventh in the league. Lloyd played well, batting .348. But the league disbanded the team and Lloyd moved back to the Bacharach Royals, an independent team that joined the Eastern Colored League when it was founded in 1922.14

The Giants continued their surge in Detroit, beating the first-place Detroit Stars four times in a five-game series over the Independence Day weekend.15 The Chicago Whip called Charleston the “colored Ty Cobb” in its coverage of that series; the Chicago Defender was already calling them the “colored Babe Ruth.”16 He finished 1921 leading the Negro National League with 15 home runs and compiling a .746 slugging percentage.17

St. Louis battled for the league title with Foster’s Chicago team and the Monarchs, who eventually finished in third place. The Giants finished the season with a 40-30-1 record to finish second behind Chicago by just .085 and ahead of the Monarchs by .003. It is worth noting that the Giants played 71 games that season while Chicago played just 66 and the Monarchs played 95 games.18

The author would like to thank John Fredland of the SABR Games Project for his encouragement and assistance in completing this story. Without it, the story would not have been written.

18 The discrepancy in the number of games played by each team was the result of teams depending on nonleague games for a large part of their revenue. League schedules were forced to work around those games. In order to allow the teams to do this, the Negro League had a little less ability to enforce schedules on the individual teams. The league even left it up to each team to arrange league games in some years. Gary Ashwill, Negro National League Question, email to Thomas Brown, March 20, 2021.