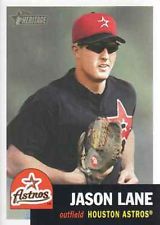 Outfielder Jason Lane had debuted with the Houston Astros in 2002. By 2005 he was the starting right fielder for that year’s pennant-winning squad; his personal highlights that season included belting 26 home runs and driving in 78 runs, hitting a home run and catching the final out of the pennant-clinching NLCS Game Six against the St. Louis Cardinals, and homering in Game Three of the World Series against the Chicago White Sox. After his solid 2005 campaign, Lane’s batting average plummeted to .201 in 2006 and then to .178 in just 68 games with the Astros in 2007. On September 24, 2007, the Astros sold Lane to the San Diego Padres, for whom he went 0-for-2 in three games. His last game for the Padres was the wild-card tiebreaker against the Colorado Rockies, in which he played two innings as an extra-innings defensive replacement, had one putout in center field, and did not come to bat. After that, Lane’s career as a major-league outfielder was over.

On June 3, 2014, a pitcher named Jason Lane entered the Padres’ game against the Pittsburgh Pirates in the fourth inning and proceeded to throw 3? innings of perfect relief. Upon closer inspection, it turned out that this truly was the same player who had last donned a Padres uniform seven seasons earlier. Players often switch positions during their careers, and there had been notable instances of pitchers becoming outfielders – from Smoky Joe Wood in the early 20th century to Rick Ankiel in the early 21st century – but the shift from outfielder to pitcher was more of an anomaly. In Lane’s case, however, he was returning to the position he had last played at the University of Southern California, where he had pitched 2? innings in relief to pick up the win in the 1998 College World Series championship game against Arizona State University.1

Lane’s ability to reinvent himself as a pitcher at the age of 35 and to return to the major leagues at the age of 37, after an almost seven-year absence, was testimony to both his perseverance and his love for baseball. After becoming a free agent in December 2007, Lane bounced among the minor-league affiliates of the New York Yankees, Boston Red Sox, Toronto Blue Jays, and Florida Marlins between 2008 and 2011. He also played in 19 games for the Southern Maryland Blue Crabs of the independent Atlantic League in 2010, and it was the Atlantic League that gave Lane the venue to perform for major-league scouts as he attempted to work his way back to the big leagues as a pitcher.

The Arizona Diamondbacks signed Lane as a pitcher before the 2012 season, but they released him when his ERA ballooned to 7.59 in 21? innings with their Triple-A team in Reno, Nevada. Lane, however, was convinced that he could pitch and returned to the Atlantic League, signing with the Sugar Land (Texas) Skeeters for whom he went 9-5 with a 3.17 ERA in 110? innings. That performance gained Lane enough notice to be signed by the Minnesota Twins, but he was released at the end of spring training in 2013 and returned to the Skeeters, for whom he posted an 8-4 record with a 2.98 ERA. At the end of 2013, the San Diego Padres took another chance on Lane and assigned him to Triple-A Tucson.

When the Tucson Padres moved to El Paso before the 2014 season, Lane moved with them and continued to toil in the minors in pursuit of his dream of making it back to the big leagues. Mike Cather, El Paso’s pitching coach, said of Lane, “Typically when you get a converted position player, a lot of times he’s just throwing. Jason pitches.”2 And Lane’s dream was fulfilled when he was called up by the Padres in early June of 2014 to pitch out of the team’s bullpen.

When Padres starter Jesse Hahn, who was making his major-league debut, ran into trouble against the Pirates in the fourth inning on June 3, Lane made his debut as a major-league reliever some 12 years after his first major-league debut as an outfielder. In his 3? innings, he faced 10 batters and needed only 36 pitches to retire them in order, including strikeouts of Starling Marte and Neil Walker (twice). Among the hitters he faced were reigning National League MVP Andrew McCutchen, .303-hitting Josh Harrison, and slugger Pedro Alvarez, who had hit a two-run homer off Hahn in the fourth. Afterward, Lane said, “That was neat. I was surprised. I was a lot calmer than I thought I would be. I was more nervous when I hit in the sixth than I was when I was on the mound.”3 Lane flied out to left field in the Padres’ 4-1 loss, so he also knew that he could still make contact as a batter.

Hahn and Lane, 12 years apart in age, became the first pair of Padres pitchers to make their major-league debuts in the same game since September 4, 1971.4 Earlier in the season, while still pitching for the El Paso Chihuahuas, Lane had remarked, “I look at the rosters and look at the birthdays and go, Sheesh, there’s no one else left from the ’70s, much less the early ’80s, so I don’t look at that. But I feel like the age thing is a nonissue.”5 With predecessors like Satchel Paige, who made his major-league debut at 42, as well as Hoyt Wilhelm and Jamie Moyer, both of whom were still pitching at 49, Lane may indeed have launched his second career.

As a Houston resident, I have seen Jason Lane at various stages of his career, including his time with the Houston Astros, the PCL’s Round Rock Express, and the Atlantic League’s Sugar Land Skeeters. He is still my oldest son’s favorite player from his two years with the Skeeters and, though he was at the time a former big leaguer, Lane was always gracious with the fans, allowing them to photograph him and giving autographs. We were two of the many fans who were happy to see Lane back in the major leagues.

Lane made his first start for the Padres on July 28, 2014, and pitched six innings of one-run ball against the Atlanta Braves, though he took the loss in a 2-0 defeat. Before being sent back to El Paso, Lane was 0-1 with six strikeouts and no walks in 10? innings, and had a 0.87 ERA.