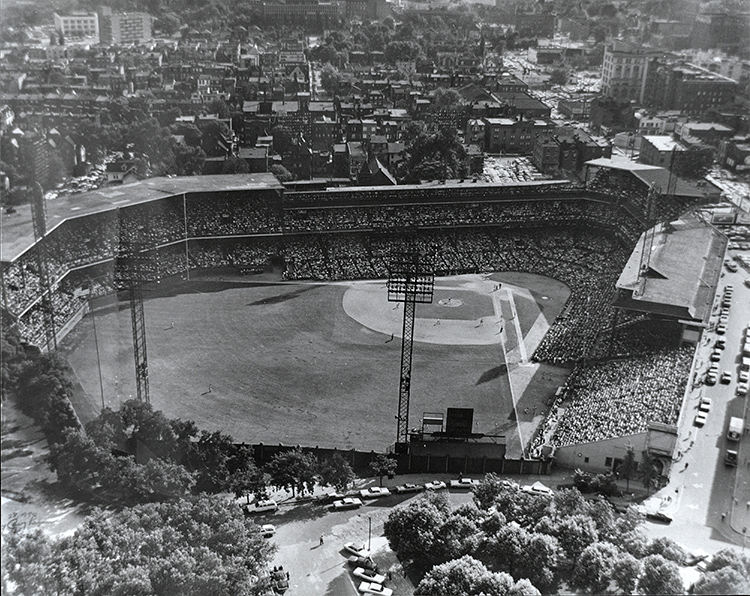 It was a brilliant day for a ballgame. The skies were clear and azure blue, the temperature in the low 80s. Wednesday, June 30, 1909, was the culmination of a glorious week of parties and galas in Pittsburgh celebrating the opening of owner Barney Dreyfuss’s million-dollar brainchild, Forbes Field, the new home of the Pittsburgh Pirates.1 The first-ever game in this magnificent new steel and concrete stadium was scheduled for 3:30 P.M. It pitted the Pirates against their nemesis for the two previous seasons, the vaunted Chicago Cubs, the reigning World Series champs. The Pirates had come in second both times to the Cubs. In 1908 just one game separated them for the pennant. On this day, league-leading Pittsburgh enjoyed a 7½-game lead over its visiting rivals.

The new baseball palace was located in the elite Oakland/Schenley area of Pittsburgh on property on the southern boundary of the newly named University of Pittsburgh, which moved there in 1907 from downtown, nearly three miles west. Visionary Andrew Carnegie himself had spearheaded an extended development program to make it an area to rival downtown. He succeeded beyond expectations. Schenley Park, the most pristine in the city, abutted the ballpark along the outfield wall. From their seats, fans could see Carnegie Institute, Carnegie Tech, the University of Pittsburgh, and a host of affluent homes and mansions.

It was a day for the fans and the city of Pittsburgh to relish. Many firms had closed for the day to allow employees to attend the game. Patrons began to arrive at the park at 9:00 A.M. to buy 25-cent bleacher seats, since all reserved seats and most grandstand admittance seats were gone. The gates were scheduled to open to the general public at 1:00 P.M. By that hour thousands of baseball patrons of every class milled about in front of the red, white, and blue bunting that patriotically festooned the elegantly adorned façade and gates. The B&O Railroad had put on extra cars to bring in excursion groups from outlying communities. In spite of a strike settled just the day before, the trolley system proved up to the task of handling its largest day’s traffic in history. The throng was abuzz with revelry, laughter, excitement, and awe over the spectacular new ballpark they were about to enter.

Fans came attired in their Sunday best. The ladies wore garments in delicate tints and bonnets of every description. The men wore suits, ties (noticeably bows), coats, and hats. Hats of every kind. By far the most popular were straws: sailors, Milans, and Panamas.2

The stands, when filled, looked like a massive sea of waving straw hats. Dreyfuss had lined up an army of attendants to take care of the grandstand spectators. Red, white, and blue megaphones were passed out, largely to the ladies, accentuating the colorful flow of revelers.

Because of the overflow crowd, men and boys without seats “were perched on girders or clung to pillars.”3 From the end of the grandstand to the end of the bleachers in left field and along the outfield wall was a necklace of humanity seated on the ground.  Failing to get a seat on the grass, males climbed to the top of the walls to sit, legs dangling.

While the massive crowd was locating seats, it was entertained by two lively bands, the Nirella and the Fourteenth Regiment, stationed at either end of the huge grandstand. Once the crowd was settled in the dedication ceremonies began. “Come the trumpeters from the Nirella Band, clad in gaudy red coats, hats of the helmet brand with white plumes, sound the glad greeting that all is well and it is time for the real fun to begin.”4 The blare of the instruments brought a mighty roar from the crowd of 30,000.

The two bands converged at home plate to lead the dedication procession. From clubhouses beneath the grandstand contingents began to emerge: the current Pirates team, led by player-manager Fred Clarke, the men in suits (city fathers, baseball-team owners and magnates, prominent businessmen), and the Chicago Cubs team. The crowd roared when one final contingent emerged, the old warriors of Pirates teams past. They were the honorees this day and led by “Uncle” Al Pratt, the founder and manager of Pittsburgh’s first professional baseball team, the Alleghenys.5

The current ballplayers removed their caps and opened ranks with great respect to allow the “old warriors” to pass through and take their place of honor behind the bands. Harry Pulliam, president of the National League, and Ban Johnson, president of the American League, led the “suits” and current players. The entire line marched slowly to the center-field flagpole, where the bands began to play America.  “A monster flag was raised to the top of the flagstaff.”6 The crowd rose in unison when it reached its pinnacle. There followed “a touching silence, which became profound when the flag was dropped to half mast out of respect to Israel W. Durham of the Philadelphia club, who died this week.”7 The curtain came down on the dedication ceremonies when Pittsburgh Mayor William Magee threw out the first pitch.

Certainly, the Pirates faithful wanted to cap off this spectacular and historic week with a victory. The game turned out to be a well-fought pitchers’ duel between a pair of veteran right-handers, Vic Willis for the Pirates and Ed Reulbach for the Cubs. The latter had led the NL in winning percentage for the previous three seasons. Willis, as it turned out, was playing his last season with the Bucs.8

Willis had a bit of a shaky start. He hit the leadoff batter, Johnny Evers. Jimmy Sheckard walked. Solly Hofman laid down a sacrifice, advancing both runners. Cubs player-manager Frank Chance got his only hit of the day, a single, scoring Evers. Sheckard tried to take home on the hit but was thrown out at the plate.

Both pitchers settled in and allowed no further scoring until the sixth, when the Pirates tied the game. The “Flying Dutchman,” Honus Wagner, singled. Rookie Bill Abstein sacrificed and Wagner scored when another rookie, Dots Miller, singled.

The deadlock was broken in the eighth. Evers singled and Sheckard sacrificed, gaining second on an errant throw into the crowd by third baseman Jap Barbeau. After Hofman flied out, Chance hit a grounder to second baseman Dots Miller, who threw home to get Evers. But Evers got his second run of the day when catcher George Gibson dropped the throw. Harry Steinfeldt laid down a bunt that Gibson could have played to get Sheckard coming home. Instead he went for a seemingly easy out at first to get Steinfeldt. Sheckard scored before Abstein made the putout. The Cubs were up by two runs, 3-1.

The Pirates rallied in the bottom of the eighth. Or did they? With one out, Clarke walked. Wagner flied out. Uncharacteristically, Evers muffed an easy fly ball, allowing Abstein to reach first. Dots Miller hit a ball to deep center field. Although enthusiasm ran high throughout the game, “pandemonium broke loose when Miller made his hit in the eighth inning, which looked like the game winning wallop.”9 Or was it?

While fielding the hit, Solly Hofman touched the ball, which spurted into the crowd. All three runners – Clarke, Abstein, and Miller – came home. However, the umpires held a conference and decided the play was subject to a ground-rule double due to the involvement of the spectators. Clarke scored but Abstein was sent back to third and Miller to second. Left-handed-swinging rookie Ham Hyatt pinch-hit for Chief Wilson and struck out, ending the inning. Neither team could mount an offense in the ninth as the Pirates left the tying run on third base during the game-ending force play at second base. The score held up: Cubs 3, Pirates 2. The time of game was 1 hour and 50 minutes.

The Pirates had five hits to the Cubs’ four, and Reulbach had walked six Pirates to Willis’s three, but the Cubs put across three runs to Pittsburgh’s two.

Owner Dreyfuss, who sorely wanted to cap off one of the most memorable weeks in Pittsburgh history with a win, lamented: “What a shame we had to lose that one. I’d have given my share of the gate to have won on this day.”10

At the end of the day 30,338 baseball patrons had passed through the turnstiles of the new baseball palace, which seated only 25,000. It was the largest crowd that ever witnessed a baseball game up to that time.11 In spite of the loss, the Pirates went on to win the National League pennant by 6½ games over the Cubs and defeated  Ty Cobb and the Detroit Tigers in seven games to win its first World Series.

Forbes Field arguably spawned the most spectacular kickoff of any stadium in baseball history on June 30, 1909. After the din died down, the new stadium took on the daily task of serving the Pirates and their faithful followers and the Pittsburgh community. It served both spheres admirably and honorably. Over the next six-plus decades it became an iconic symbol of the spirit of the region it served.

1 Forbes Field was named for a British officer, John Forbes, who was a hero in the French and Indian Wars. In 1758 Colonel Forbes (later promoted to general) led the campaign to capture Fort Duquesne from the French. As the enemy fled, it burned the fort. Forbes immediately rebuilt it, naming it Fort Pitt after British Secretary of State William Pitt the Elder. Forbes also named the settlement at the junction of the Allegheny and Monongahela Rivers Pittsburgh.

2 Haberdashers in downtown Pittsburgh conducted sales campaigns to dress every male fan in a straw hat for this game.

5 Al (“Uncle Al”) Pratt was a pitcher-outfielder for the Cleveland Forest Citys in 1869-1870. The team was in the Professional League of Baseball Players, the first professional league in America. In 1880 he founded the first major-league club in Pittsburgh, the Alleghenys, which joined the American Association.  The team began play in 1882 with Pratt as its manager through 1883. He dropped out of major-league baseball at the end of the 1883 season.

7 Ibid. Israel Wilson Durham was a state senator from Philadelphia and briefly the president and principal owner of the Philadelphia Phillies in 1909.

11 The Forbes Field opener exceeded the previous attendance high for a baseball game, 30,247, on October 4, 1908, in Chicago. That game was also a Pittsburgh-Chicago game.