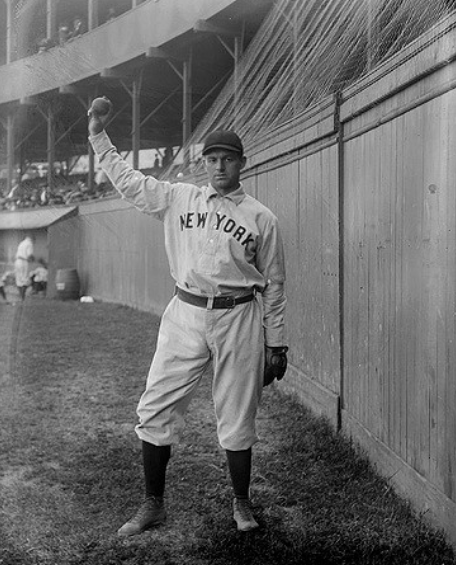 The Cincinnati Reds arrived in New York for a three-game series on June 1, 1904, with a 26-12 record, only percentage points behind the Giants, who stood atop the National League at 25-11. The Reds kicked away the opener 2-1 the next day, with a couple of errors in the eighth. In the second game, it was the Giants’ turn for eighth-inning miscues, and the Reds pulled out a 3-2 victory.

The series finale on June 4 featured two undefeated pitching stars. For Cincinnati, it was Jack Harper’s turn in the rotation. In the spring of 1904, “Oil City Jack’s” checkered, controversial career seemed at a peak: seven complete-game victories in seven starts.1 In addition to his curves and a “slow ball,” Harper also possessed a lively fastball, sometimes not fully under his command.2 Against Chicago in the first game of a May 30 doubleheader, his last effort before the showdown versus the Giants, Harper beaned Frank Chance three times.

For New York, Joe McGinnity occupied even loftier heights. Following his doubleheader heroics in the final month of the 1903 campaign, he started his 1904 season with a 13-0 record.3 The “Iron Man” had recently added a “cross-fire curve” to his repertoire. Delivered, McGinnity explained, from the “extreme right of the pitcher’s box,” with a motion towards the third-base line, the “wide out curve,” reached the batter “almost as though the third baseman had thrown the ball.”4

A large Polo Grounds crowd seemed likely. Saturdays held obvious potential: while bad weather limited attendance to only 5,000 for an April 30 visit from the Dodgers, some 20,000 souls witnessed the Giants trounce the Phillies the week before on April 23.5 But the Giants spent most of May on the road. The series with the Reds launched a 14-game homestand. Thursday’s opener drew 4,000 fans on a rainy day, but 11,000 showed for Friday’s contest.6 A marquee pitching matchup between the two elite teams remained to benchmark the affections New Yorkers held for their Giants.

The day was partly cloudy, the game scheduled to being at 3:30. Hundreds lined up in front of the gates at noon, and when the turnstiles started clicking an hour later, an ever-increasing flow was underway. By 3:00 all the seats were filled and “rows, two and three deep, of standees were in both the upper and lower tiers of the grand stand.”7 The gates shortly closed, and hundreds of denied fans surged against them in frustration.

The initial contingent of 25 policemen was clearly inadequate to the task, and calls went out for reserves from another seven stations. With the additional resources, overflowing right-field stands were depopulated, and these fans added to those already on the margins of the playing field. These spectators eventually lined almost the entire perimeter (the exception being in front of the left-field bleachers, which were opened for the first time in the season), standing as many as 20 deep.

Official attendance was reported as 37,223. Most sources announced it a major-league record.8 Not included in these counts: “the viaduct and also Coogan’s Bluff were jammed, and scores of venturesome boys and men climbed on the ‘L’ structure and refused to be driven down.”9

At last, the game was underway, with Reds rookie second baseman Miller Huggins leading off the first by drawing a walk from McGinnity. Mike Donlin singled to left. Then Giants catcher Jack Warner’s “perfect throw” to shortstop Bill Dahlen caught Huggins napping off second.10 It was a costly out, for Cincinnati player-manager Joe Kelley dropped a Texas Leaguer in front of right fielder George Browne, with Donlin scampering to third, before Cy Seymour singled him home. Cozy Dolan’s grounder forced Seymour at second, Tommy Corcoran popped up to Giants second baseman Billy Gilbert, and Cincinnati had a 1-0 lead.

From the onset, the Giants were ineffectual against Harper. The first Giant reached base in the second, when Roger Bresnahan led off, reached base on shortstop Corcoran’s throwing error, and eventually reached third, but expired there when Gilbert grounded out to end the inning. Browne in the third, Bresnahan in the fourth, and Warner in the fifth earned two-out walks, but each time Harper retired the next batter. He issued another pass in the seventh, to Sam Mertes with one out. Again, the Giants failed to capitalize.

Meanwhile, McGinnity and his defense shut the door on the Reds. Nothing came of either Sam Woodruff’s lead-off walk in the second or Donlin’s leadoff single in the third. In the fourth, after Woodruff lined a one-out single to right, he was doubled up on first after Gilbert speared a Heinie Peitz liner. Gilbert made another crowd-pleasing play in the fifth, darting out to center to glove Donlin’s would-be single. Then in the sixth Dahlen dug out a poor throw from Warner to catch Dolan stealing.

The Reds went again meekly in the top of the ninth. Harper again strode out to center of the drama, his no-hitter, and mastery of the day’s passions, still intact. With his first pitch of the inning, however, rookie Art Devlin smashed a double to the left-center gap and the crowd, “shrieked, shouted, and showed other manifestations of enthusiasm, and it was some time before play was continued.”11 Dan McGann sacrificed Devlin to third. Bresnahan’s fly brought him home, just ahead of Dolan’s throw, and “hundreds broke from the lines and rushed toward the diamond, cheering like mad, only to be hurled back by the bluecoats.”12

The Giants failed to accomplish anything else in the ninth, and the game headed into extra innings, tied 1-1. Neither pitcher allowed a base-runner in the 10th. In the top of the 11th, with one out, Kelley reached first on Dahlen’s error. Seymour and Dolan then singled, loading the bases. Corcoran hit a ball back to McGinnity, who tossed the ball to Warner, and Kelley was out at the plate. But Warner’s fire to McGann at first, in an attempt to double up Corcoran, was off-target. Seymour rushed home, and the Reds led again, 2-1.

By then, darkness was taking over the field. “The ball began to resemble a black bat, winged its uncertain way through the air.”13 The crowd pulled even tighter to the field, sensing the end at hand. “They kept moving in,” Harper recalled years later, “finally lighting newspapers and waving them when I delivered to confuse me.”14

Devlin and McGann opened the bottom of the eleventh with singles, and “the wildest excitement prevailed.”15 Bresnahan harmlessly popped up. Mertes hit a deep sacrifice fly to center, and Devlin came home from third to tie the game again. Dahlen grounded out to Huggins. Umpire Hank O’Day, who earned widespread praise that day, and may have been its truest hero, called the game.

The 37,223’s reign as a record crowd was a brief one. The next Saturday, in a game against Chicago, 38,805 fans filled the Polo Grounds. Efficiency and order prevailed. Temporary ticket offices greeted passengers disembarking from the Els and trolleys. Staff then directed ticket holders to the turnstiles. Once inside, fans were directed to the stands, and only when these were filled, to carefully marked areas on the field. A hundred policemen were on hand, and there were none of “the noisy disturbances or encroachments upon the playing field as were visible” from the week before.16 The Giants lost to the Cubs, 1-0, in a game which brought McGinnity’s winning streak to an end.

In addition to the sources mentioned in the notes, the author also accessed the following sites: