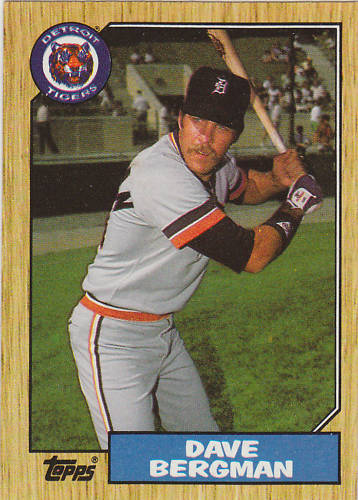 Ask a Tigers fan of recent vintage to associate “Blue Jays” and “extra innings” and the memories will not be positive. On August 10, 2014, Detroit squandered a 5-0 victory, eventually losing when Jose Bautista sliced a game-winning single in the 19th inning. Thirty years before, the Tigers and Blue Jays faced off in an equally riveting overtime contest. In both cases, the victory went to the home team.

No longer the perennial doormats of the American League East, the 1984 Blue Jays under manager Bobby Cox won 26 of their first 40 games. Yet, since the Tigers opened with 35-5, Toronto was already 8 games back. Through a series of shrewd blockbuster trades, Toronto general manager Pat Gillick had assembled a team anchored by veterans Dave Collins, Damaso Garcia, and Alfredo Griffin. Meanwhile, the farm system began to harvest stars Lloyd Moseby and Dave Stieb while original Jay and Detroit native Ernie Whitt worked behind the plate.

All were in the starting lineup on June 4 to open a four-game series in Detroit with Alan Trammell, Lou Whitaker, Kirk Gibson, and Larry Herndon. A crowd of 26,733 converged on Tiger Stadium while millions more watched at home. Dubbed “the Showdown in Motown,” the game was broadcast by Howard Cosell, Al Michaels, and Earl Weaver on ABC Monday Night Baseball.

Manager Sparky Anderson sent Juan Berenguer to start for the Tigers. The Panamanian right-hander, a well-travelled veteran, faced many former teammates, including ex-Kansas City Royals Rance Mulliniks and Willie Aikens. The Tigers were slumping while the Blue Jays suddenly forgot how to lose. As pitching coach Roger Craig pointed out, if Toronto swept, Detroit’s lead would be reduced to half a game:

“I think it’s important to remember that Toronto came to Tiger Stadium with 15 wins in its previous 19 games while we had lost six of our previous nine,” Craig recalled after the season. “… No matter how well we played, they were still on our heels. In the recesses of my mind I [feared] they could catch us.”1

The Blue Jays drew first blood when Willie Upshaw homered to lead off the second inning. Upshaw was on second base in the sixth when George Bell struck Berenguer for a second home run; 3-0 Blue Jays. Berenguer was living up to his unflattering nickname of “El Gasolino,” yielding eight hits and two walks in 6? innings, while also striking out seven. After speedy Damaso Garcia doubled, Anderson yanked Berenguer. He replaced him with reliever Willie Hernandez, who got out of the inning without any further damage.

Meanwhile, Dave Stieb was cruising for the Blue Jays. He entered the game with a record of 7-1, and would soon start his second consecutive All-Star Game. He had given up only three hits through six, but his luck was about to change.

“The seventh was the real key that night,” Tigers’ first baseman Dave Bergman told reporter Eli Zaret years later. “Our ballclub was so strong that our order that night had John Grubb hitting sixth, Chet Lemon seventh, me eighth, and Howard Johnson ninth. Stieb plunked Lemon, who was on first with one out.”2 After Bergman rapped a single, the “Showdown in Motown” began to resemble Blazing Saddles’ Battle of Rock Ridge when Johnson tied the game with a home run. Before the inning was over, reliever Dennis Lamp was brought in to pitch. Neither team scored in the eighth or ninth as the game went to extra innings.

Hernandez pitched three solid innings before he was replaced by Aurelio “Senor Smoke” Lopez in the 10th. Rookie portsider Jimmy Key pitched the bottom half of the inning. Lance Parrish led off with a base hit for the possible go-ahead run. After Darrell Evans sacrificed to advance Parrish, Key was relieved by right-hander and occasional anthem singer Roy Lee Jackson. Rusty Kuntz grounded to the mound for the second out before Jackson walked Lemon.

Like many of his opponents that game, Bergman had developed as a player in the Yankees’ farm system. Born in 1953 in Evanston, Illinois, Bergman broke in with New York in 1975. In eight major-league seasons, including stops in Houston and San Francisco, Bergman had developed a reputation that “if you threw me a slider down and in, you better get it in because I can golf it out of the ballpark.”3 What followed was in Roger Craig’s estimation “one of the greatest pitcher-batter confrontations I have ever witnessed. This was baseball in its simplest and purest form,” he elaborated, “Jackson, the pitcher, against Bergman, the hitter; first place team against second place team; tenth inning of a tied game; two outs and two runners on base.”4

Bergman remembered telling himself as he strode to the plate to “go up there and slash and have a good time.” He added, “little did I know.”5

Down in the count 0-and-2, Bergman fouled off pitch after pitch before looking at balls one and two. He fouled pitch number eight before extending the count full, passing on a low fastball. Three more foul balls followed. By now, the at-bat was seven minutes old. Jackson’s 13th pitch to Bergman was “a slider six inches off the ground” but that was the one he liked.6 Down went Jackson as that ball landed in the upper deck. The Tigers and their fans could once again believe in miracles.

“There comes a time in every season when a hitter puts all his mechanics together,” Bergman told writer George Cantor many years later. “That night was it for me.”7 It was Bergman’s first home run in a Detroit uniform. Sparky Anderson called it “the greatest at-bat in my life.”8 The final score: Tigers 6, Blue Jays 3, won on pitching, defense, and three-run homers. Roger Craig recalled the postgame commotion:

“There were between fifty and sixty reporters in our clubhouse, which is one of the smallest in the league, and four television mini-cameras converged on Bergman’s locker. We had beaten the club that was gaining on us.”9 Ironically, Bergman’s monumental plate appearance almost never happened due to a groin pull late in the game. As he remembered, “I told Pio DiSalvo, our fabulous trainer, that he had to do something because I’m not coming out of this game. … It was probably about the eighth inning that he took me out of the clubhouse and wrapped me up.” He continued, “If Pio’s not the trainer, I may be out of that game before I could deliver the biggest hit of my career.”10

Toronto finished the 1984 season with a record of 89-73, second best in the American League but 15 games behind the eventual world champion Tigers. The Blue Jays excelled in their rotation, but their bullpen was their demise. In the years to follow, with Tom Henke and later Duane Ward established as their closers, the Blue Jays won five of the next nine division titles, along with the World Series in both 1992 and 1993. Although the Tigers returned to the World Series twice after 1984, they have been unable (as of 2014) to claim baseball’s ultimate prize.

Bergman hit six more homers in 1984, including another three-run extra-inning tiebreaker against the Blue Jays on September 7. He remained with the Tigers until 1992, when he retired to enter the investment industry. Bergman lost his battle with cancer in early 2015. In his own words, the home run off Jackson cemented his legacy as a player:

“Fans don’t remember the ground balls I’ve booted or the times I struck out with the bases loaded. But that game … proves again that it’s better to be lucky than good. I had a blue collar, lunch bucket kind of career but that at-bat has lived with me ever since.”11 Perhaps the best compliment Bergman received was from a former minor-league manager of his, Bobby Cox:

“The next day,” Bergman recalled, “I was talking with guys near the cage and, as a sign of recognition that I got him the night before, he threw one at my back. Then he smiled and said, “Nice job last night.’”12