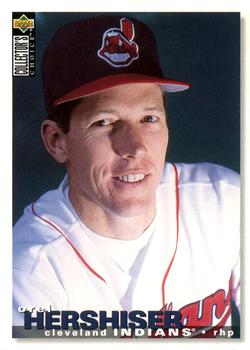 “We were a rock star baseball team,” said right-hander Orel Hershiser about the 1995 Cleveland Indians. “You’d drive around and see Wahoo signs in almost every front yard. You’d walk into restaurants, and there were pictures of the players on the walls. I’d never quite seen anything like it. I get the chills just to think about it.”1 Little did Hershiser know that he’d play one of the many starring roles on Cleveland’s thundering US tour.

Hershiser’s career was at a crossroads in 1995. Two years after winning 23 games, tossing a big-league-record 59 scoreless innings, and leading the Los Angeles Dodgers to the World Series championship in 1988, Hershiser underwent rotator-cuff surgery on his right shoulder in late April 1990. His road to recovery was agonizingly slow. After four mediocre seasons and no longer being considered one of the NL’s elite starters, Hershiser became a free agent after the strike-shortened 1994 season, in which he won just six times. Only the San Francisco Giants and the Cleveland Indians showed interest in the 36-year-old former Cy Young Award recipient with 134 career victories. “I looked at Cleveland’s roster,” Hershiser recalled in an interview with sportswriter Terry Pluto, “and it looked like those guys would score seven runs a game. And they had a good bullpen.”2 Less than three weeks before Opening Day, Hershiser signed with the Indians, on April 8, 1995, for about half his salary from the previous year; however, little was expected of the free-agent acquisition.

When the Indians and Detroit Tigers headed to Cleveland’s Jacobs Field to play the first contest of a three-game series, on Monday, June 6, the teams were going in opposite directions.  Skipper Mike Hargrove’s Tribe had won seven of its last eight games and was firmly ensconced in first place (24-10), five games in front of the Kansas City Royals.  Sparky Anderson, in his 16th and final campaign as Detroit’s pilot, had his club in second place, but the Tigers had lost six of their last eight games, and had fallen to 16-20.

The pitching matchup featured age versus experience. Hershiser, who had been slated as a possible fourth or fifth starter, revived his career in 1995. The 13-year veteran with 310 career starts had won his last four decisions in May.  “[My] shoulder is doing more naturally what I want it to do,” he said in an attempt to explain his unexpected success.3 Rugged, 6-foot-4 right-hander Sean Bergman, in his first full season in the majors, was making his 18th career start for the Tigers.

On a warm, 71-degree evening, the “Jake” held 34,615 spectators, about 7,000 fewer than capacity. The three-game set with the Tigers marked the last time fans could casually buy tickets at the ballpark’s box office for a long time. Beginning on June 12, 1995, Cleveland sold out every game until April 4, 2001. Hershiser, nicknamed “Bulldog,” set the tone of the game by striking out the side in the first inning. His competitive mound presence belied his tall and lanky, altar-boyish appearance.  In a scoreless game, the potent Indians offense erupted in the bottom of the third inning. Center fielder Kenny Lofton led off by blasting a home run to deep right field. After a two-out walk to cleanup slugger/left fielder Albert Belle, 39-year-old DH Eddie Murray, who began the game just 24 hits shy of 3,000, smashed the 466th round-tripper of his career to make it 3-0. With runners on first and third, first baseman Paul Sorrento singled to deep center field, driving in Jim Thome. Lofton increased Cleveland’s lead to 5-0 in the fifth inning with his second home run.

Relying on pinpoint control and ball movement, Hershiser rekindled memories of 1988. He used an assortment of sinking fastballs, cutters, curves, sliders, and changeups to keep Tigers hitters guessing, whiffing 10 batters for the first time since 1989. (It was the sixth and final time he reached double figures in K’s in his career.)  “[D]ifferent locations, different speeds and slightly different arm angles on all those pitches gave me a pretty wide palette of choice,” Hershiser once said about his varied pitching arsenal.4 He surrendered just six hits, did not issue a walk, and was never in trouble.  Detroit managed two baserunners in an inning only once, when Bobby Higginson connected for his third hit followed by Danny Bautista’s single with two outs in the seventh. With runners on the corners, Hershiser induced Chris Gomez to fly out to Lofton.

The Indians tacked on three more runs in the sixth inning off John Doherty, who had relieved Bergman the previous inning and hurled the final four frames of the game. Demonstrating that they could also play small ball, Cleveland had two doubles, two singles, and a walk. Shortstop Omar Vizquel, second sacker Carlos Baerga, and Belle each drove in a run.

Hershiser set down the side in order in both the eighth and ninth innings to record his first shutout in two years and the 25th and last in his career. “The last four or five outings, there hasn’t been much difference [from 1988],” he said after the game. “Maybe a mile or two an hour on the fastball. But the movement is almost completely back, and the breaking ball is almost completely back.”5 He threw 107 pitches, including 72 strikes, and finished the game in 2 hours and 43 minutes.

The victory was a team effort, with seven of the nine starters (everyone except Baerga and catcher Tony Pena) recording at least one hit; six players drove in at least one run. The Indians improved their record to 25-10, marking their best start since 1966. “It was like being on one big hot streak,” reminisced Hershiser about the Indians’ pennant-winning season and 100 victories in 144 games.6

In addition to the sources included in the Notes, the author also relied on Baseball-Reference.com and Retrosheet.org.