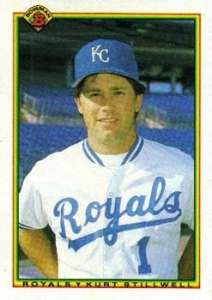 One game in June counts as much as the other 161, but in practice they often don’t feel that way. The newness of the season has dissipated, but the excitement of a pennant race is still weeks away. However, this game between the Royals and Rangers had a little extra shine to it. The teams were average (Texas entered the game at 26-20, in third place in the AL West, while the Royals were in last place with a 23-27 record), but Kansas City was sending two-time Cy Young Award winner Bret Saberhagen to the mound, while Texas was countering with the great Nolan Ryan, who at age 44 still had two seasons remaining in his Hall of Fame career. Little more than a month earlier, Ryan had thrown his seventh no-hitter.

Besides the pitching matchup, fans were also intrigued by the idea of a day game during the week. In 1991 those were a new experiment for the Royals. Team President Joe Burke said, “We did it last year because we had a number of requests to at least try one. It was successful, so we came back with another one this year.” The team expected more than 30,000 fans for this game; more than 38,000 showed up.1 Fans lined up for tickets early that morning and caused a traffic jam two hours before the 1:35 P.M. start time.2

Ryan and Saberhagen were as good as anticipated in the first three innings, with Saberhagen collecting three strikeouts. Meanwhile, Ryan had racked up five K’s without allowing a hit.

But Ryan was the first pitcher to allow a run. In the fourth, Brian McRae led off with a single. George Brett singled with one out, and Warren Cromartie doubled with two outs to score McRae. The Royals added another run in the fifth, with singles by Brent Mayne and David Howard ahead of a McRae sacrifice fly.

Saberhagen had allowed just three hits entering the seventh, but Texas tied the game that inning. Kevin Reimer led off with a single. Mike Stanley drew a two-out walk, then pinch-hitter Denny Walling singled to drive in one run. Pinch-hitter Brian Downing hit a grounder to third. Kevin Seitzer fielded it cleanly but made a bad throw to first, pulling Cromartie off the bag. Stanley scored from third and the score was even at 2-2.

Both Ryan and Saberhagen left the game after seven innings, turning things over to the bullpens.

The Rangers broke the tie in the ninth against Luis Aquino. With one out, Mario Diaz singled and took second on Rafael Palmeiro’s groundout. The Royals intentionally walked Ruben Sierra, but Julio Franco smacked a grounder into left field. Diaz scored, and the Rangers took a 3-2 lead into the bottom of the ninth.

It took three pitches for closer Jeff Russell to give up the lead. Carmelo Martinez, batting for Cromartie, launched a 2-and-0 pitch into the left-field seats to tie the game. Although a good portion of the crowd had left after Ryan and Saberhagen were finished, the remaining fans demanded – and got – a curtain call from Martinez.

The first scoring chance in extra innings belonged to the Royals. In the 11th, Martinez drew a leadoff walk. Pinch-runner Gary Thurman stole second and advanced to third on a bad throw. The Rangers issued two intentional walks, loading the bases in hopes of a double play, or at least a force out at home. Kurt Stillwell hit a hard grounder toward left field, and third baseman Steve Buechele attempted a diving stop. The ball ricocheted off his glove … right to shortstop Diaz, who fired home to cut down the winning run. Mike Macfarlane followed with a popup and McRae, trying to bunt for a hit with two outs, hit the ball a little too hard. Buechele’s throw nipped him at first for the third out.

The Rangers had a chance to take the lead in the 12th. Franco singled to start the inning, and Reimer walked. Juan Gonzalez hit a line drive to third baseman Seitzer, who dropped it. He threw to second for one out, and the Royals had Franco in a rundown between second and third. But he eluded Seitzer and made it to third. Royals manager Hal McRae argued the call with third-base umpire Dale Scott, who said Seitzer had missed the tag. The KC skipper had barely returned to the dugout when Buechele popped up a squeeze bunt attempt. Mayne caught it and fired to third for the double play. When Scott ruled Franco had made it back safely, McRae charged out of the dugout and promptly earned the first ejection of his managerial career, 13 games in. As McRae and Scott argued, boos and trash rained down on the field. When play resumed, Walling grounded out to end the inning.

It was becoming increasingly obvious that one run would win this game. So in the top of the 16th, when Reimer and Gonzalez started the inning with singles, Texas manager Bobby Valentine turned to small ball again. First, a sacrifice bunt to move the runners up. And then the Rangers attempted their second suicide squeeze of the game. This one turned out even worse for Texas than the first one. Stanley popped up his bunt attempt, Mayne snared it, and fired to third for an inning-ending double play.

“We made two lousy bunts and get outs. …. Both times I’m thinking right-handed pitcher against right-handed hitter. It’s a long game, people are tired, you get one run and you’re going to win the game,” Valentine said.3

The Royals had another chance to win in the 16th. Thurman led off with a single and moved to second on a bunt. Mayne – who caught all 18 innings, just like his Texas counterpart Stanley – hit a looping fly ball to center field. Sierra couldn’t make the catch, but got close enough to it that Thurman stopped just before third base. Thurman tried to score anyway, but Sierra’s throw home was in time. Despite a collision, Stanley held on to the ball and preserved the tie.

When the 18th inning arrived, both teams had used up their bullpens. Kansas City turned to starting pitcher Mike Boddicker, who had picked up the win in the first game of the series two days earlier. He continued to baffle the Rangers in this one, working a perfect inning against the heart of the Texas order.

Valentine put in left-hander Kenny Rogers to pitch the bottom of the 18th, although Rogers was scheduled to start in New York the next night.4 Seitzer led off with a single and Mayne drew a walk. Stillwell came up in yet another bunt situation.

“It was about my 10th at-bat,” Stillwell said. “I didn’t think I could swing the bat anyway.”5 Stillwell bunted and Rogers quickly pounced on it. He had time to make a throw to third for a force out, but didn’t get a good grip on the ball. His throw sailed well wide of Buechele and nearly hit third-base coach Adrian Garrett. “If that throw had hit me and dropped straight down and the run didn’t score, I think people might have come down out of the stands and killed me,” Garrett said.6

As the ball skipped up the left-field line, Seitzer headed home, stomping emphatically on the plate to finally bring the longest game (by time) in Royals history to an end. Six hours and 28 minutes after the first pitch, Kansas City had a 4-3 win.

The game featured 651 pitches, 157 plate appearances, 29 hits, 24 walks (seven of those intentional, including four by Rangers reliever Gerald Alexander), and 21 strikeouts. The two teams combined to go 4-for-34 with runners in scoring position, stranded 45 runners (28 of them in extra innings), and left the bases loaded seven times. Reimer picked up five hits and two walks, while Brett had four hits and three walks. On the other end of the spectrum, Stillwell went 0-for-7 and Palmeiro went 0-for-9, dropping his average from .325 to .310.

“It was the longest day of my life. It’s funny. How can I go nine times and not get a hit? I could hit right-handed and get two hits,” Palmeiro said.7

Understandably, frustration reigned in one locker room, while the other one was filled with hard-earned relief.

“We gave it to them in the end,” Valentine said. “They didn’t earn it. That was the disappointing thing.”8

“It was a good day,” Hal McRae said. “We played 18 innings and won. A lot of people got to play. George (Brett) had four hits. It was a helluva day.”9

Besides the articles listed in the Notes, the author consulted baseball-reference.com and retrosheet.org.