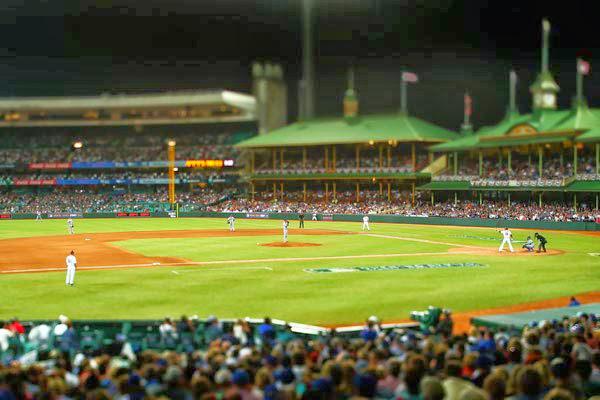 In June of 2013, Major League Baseball announced that the Los Angeles Dodgers and Arizona Diamondbacks would open the 2014 season with a two-game “Opening Series” to be played at the historic Sydney Cricket Ground in Sydney, Australia.1

The Cricket Ground had been in continuous use as a sporting venue since the 1850s, and although the stadium had undergone many renovations over the years, its Members Pavilion, or grandstand, had been in use since 1886.2 When the Dodgers and Diamondbacks took the field on March 22, 2014, the Cricket Ground became the oldest stadium ever to host a major-league baseball game and the first in the Southern Hemisphere to host a regular-season game.

Before 2014 just a handful of regular-season games had been played outside the United States and Canada (not counting the Expos’ games relocated to San Juan, Puerto Rico, in 2003 and 2004. The games were an August 1996 series between the Mets and Padres in Monterrey, Mexico; an Opening Day game between the Rockies and the Padres in Monterrey in 1999; four two-game Opening Day series in Tokyo (New York Mets-Chicago Cubs in 2000 New York Yankees-Tampa Bay Devil Rays in 2004, Boston Red Sox-Oakland A’s in 2008, Seattle Mariners-Oakland A’s in 2012); an Opening Day 2001 game between the Rangers and Blue Jays in San Juan; and a three-game series in June 2010 between the Mets and Marlins also in San Juan.3

The date of the Dodgers-Diamondbacks games in March 2014 corresponded with the 100th anniversary of the last time major-league teams had played in Australia; the Chicago White Sox and New York Giants played exhibition games at the Sydney Cricket Ground in January of 1914. Those games were part of the White Sox and Giants’ offseason World Tour, which spanned the globe and included stops in Japan, the Philippines, Egypt, and points in Europe in addition to Australia.4

Unlike in 1914, the preparation of a venue to host a regular-season major-league game in 2014 was no small feat. After six months of unsuccessful experimentation to find the right mix of materials to construct a major-league standard pitchers’ mound and infield, the clay used for the mound and infield had to be imported from San Diego under Australian quarantine guidelines, which required that it be extracted from five meters below the surface. In addition, 300 tons of crushed terra-cotta were used for the warning track and a total of 3,560 square meters of surface were removed to accommodate the infield and warning track.5

The playing area was configured with the outfield fences 328 feet down the lines, 370 feet to the power alleys and 400 feet to straightaway center field with a considerable amount of foul territory.6

The skies were threatening but the field was game-ready on March 22 when the Diamondbacks took the field after a brief weather delay. Wade Miley took the hill for the Diamondbacks to face the Dodgers’ Yasiel Puig as the announced crowd of 38,266 settled in to witness the first pitch of the 2014 major-league season. Miley fanned both Puig and Justin Turner and completed a 1-2-3 first inning with a groundout to second by Hanley Ramirez. Dodgers ace Clayton Kershaw allowed singles to Aaron Hill and Paul Goldschmidt in the bottom of the first inning but escaped without any runs being scored.

The Dodgers broke the ice in the top of the second when Adrian Gonzalez drew a walk and went to third on a double by Scott Van Slyke. Gonzalez scored one out later on Andre Ethier’s groundout. Los Angeles padded the lead in the top of the fourth when Gonzalez reached first on a wild pitch after striking out and Van Slyke homered to right.

Kershaw was not particularly sharp in his initial outing of the season but he was effective enough to subdue the Diamondbacks. Arizona got its only run of the game in the bottom of the sixth when Goldschmidt doubled, advanced to third on a wild pitch by Kershaw and scored on Mark Trumbo’s groundout. Kershaw was replaced on the mound in the bottom of the seventh by Chris Perez after pitching 6⅔ innings and allowing just that run on five hits, with one walk and seven strikeouts. “I just feel relieved to get this one out of the way,” he said after the game.7

The Dodgers bullpen held the Diamondbacks hitless the rest of the way to secure the 3-1 win with Kenley Jansen recording the save. Miley, the losing pitcher, went five innings and allowed three runs on three hits with two walks and eight strikeouts.

The Australian crowd enjoyed their first taste of major-league baseball in a century, particularly the license to keep foul balls hit into the stands, something that is not allowed during cricket matches at the venue.8 They also enjoyed the taste of nachos, Cracker Jack and the $36 two-foot-long hot dogs, not to mention goodly quantities of beer, which were exhausted at the concession stands by the fifth inning.

The Dodgers completed a sweep of the two-game series the next day with a 7-5 victory.

Los Angeles went on to win the National League West Division championship by six games over the San Francisco Giants before losing the National League Division Series to the St. Louis Cardinals, three games to one. The Diamondbacks finished a disappointing season in last place in the NL West, 30 games behind the Dodgers. Clayton Kershaw won both the National League Cy Young and Most Valuable Player awards with a 21-3 record and a 1.77 ERA.

Will major-league baseball return to Australia? “We don’t see this as a one-time thing. We’d love to come back,” Paul Archey, Major League Baseball’s senior vicepresident for international operations, said during the series. Jason Moore, the Australian promoter who helped bring the series about, was optimistic that there would be a repeat performance. “Make no mistake, it will come back,” Moore said. When? Of that he was less certain: “Whether it comes back in four or eight or 10 years, I don’t know.”9

The author was one of the 38,226 in attendance at Opening Day 2014 at the Sydney Cricket Ground.

In addition to the sources cited in the Notes, the author used the Baseball-Reference.com and Retrosheet.org websites for material pertinent to this article. Game account, standings, scores and award information from Retrosheet.org.