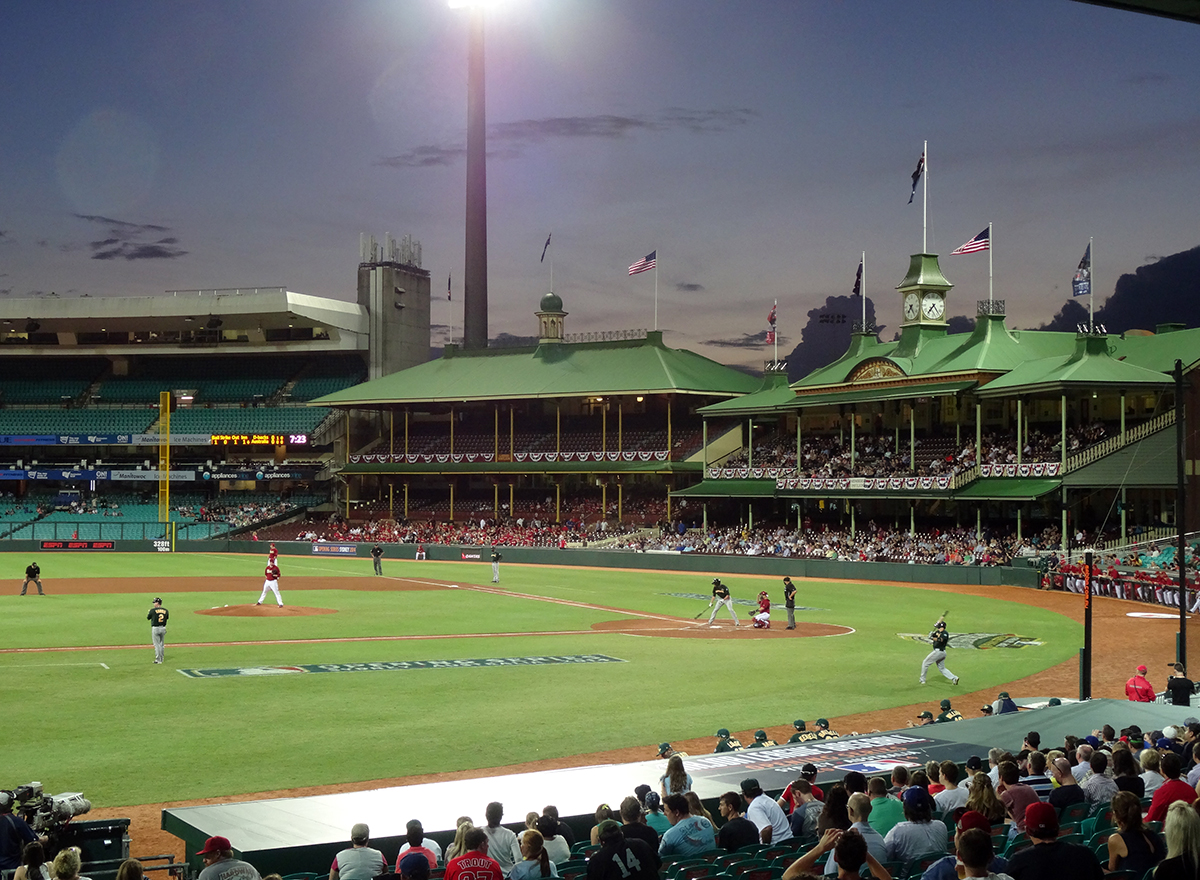 In 2014 major-league baseball returned to Australia and the Sydney Cricket Ground for the first time in 100 years.

As part of their world tour between the end of the 1913 World Series and spring 1914, the New York Giants and Chicago White Sox played on the Sydney Cricket Ground from January 3 to 5, 1914. Their exhibitions included games against a team from the province of New South Wales, with a battery of major-leaguers augmenting the locals.1 (During their time in Australia, the Giants and White Sox also played a game in Brisbane and two in Melbourne.)

Return visits by American professional baseball teams were proposed at various times over the following years, but it wasn’t until June 12, 2013, that the speculation became reality. Major League Baseball announced that the Arizona Diamondbacks and Los Angeles Dodgers would open the 2014 season on March 22-23 on the Sydney Cricket Ground.2

Four games on four consecutive days were planned for the Sydney Cricket Ground, from March 20 to 23. The first would match Australia’s National Team against the Dodgers; the National Team would next play the Diamondbacks. The opening series between Arizona and Los Angeles would follow.

At the time of the Dodgers and Diamondbacks’ visit to Sydney, the Australian National Team was a year removed from its lowest-ever finish in the World Baseball Classic, when it lost all three games it played in the 2013 competition. It hoped to use the exhibition games against major-league teams as an opportunity to showcase local talent to a home crowd.

Six of the Australian players had major-league experience. Sydney native Ryan Rowland-Smith had served as a swingman on the Seattle Mariners’ pitching staff from 2007 to 2010; in 2014 he was a member of the Diamondbacks, returning to the major leagues after a four-season absence. Others who had played in the major leagues were Brad Harman, Justin Huber, Luke Hughes, Shane Lindsay, and Brad Thomas.

The Australians also had three coaches with major-league playing experience. Graeme Lloyd pitched in 568 games, all from the bullpen, in 10 seasons; as a member of the 1996 and 1998 New York Yankees, he was the first Australian to earn a World Series ring. David Nilsson batted .284 in eight seasons with the Milwaukee Brewers and played in the 1999 All-Star Game. Glenn Williams played for the Minnesota Twins in 2005.

Although there had not been many games played between Australia and major-league teams, the Aussies had one previous success. In a warmup game before the 2009 World Baseball Classic, the Australian National Team came back from a four-run deficit to beat the Seattle Mariners, 11-9, in Peoria, Arizona.3

The 2014 games opened on Thursday, March 20, with the Australian National Team playing the Los Angeles Dodgers. Hoping to replicate their 2009 win over the Mariners, Australia took a 1-0 lead in the third inning and scored another run in the sixth. But the Dodgers rallied for four runs in the eighth — highlighted by a two-run home run by Yasiel Puig, the runner-up for the National League Rookie of the Year Award in 2013 — to pull out a 4-2 win.4

A day later, Australia had another opportunity to boost the nation’s baseball profile against the Diamondbacks. This time, the National Team rose to the occasion.

On the mound for Arizona was Archie Bradley, at age 21 one of the game’s top young pitching prospects. Baseball America ranked him ninth in its annual list of rising stars. He made his major-league debut in 2015. Also on the field for the Diamondbacks: 2013 National League All-Star and MVP runner-up Paul Goldschmidt; Mark Trumbo, newly acquired from the Los Angeles Angels; and shortstop Didi Gregorius from the Netherlands. Five years later, Gregorius would also play in the first official major-league game in England when he visited London as a member of the Yankees.

Australia started well in the first inning, when leadoff man Mitch Dening walked and, after two outs, scored on Hughes’ single. They extended the lead in the third frame, when Logan Wade singled, Dening doubled, and Stefan Welch had an RBI hit up the middle. A.J. Pollock’s strong throw from center field cut down Dening trying to score from second, but Australia had a 2-0 lead.5 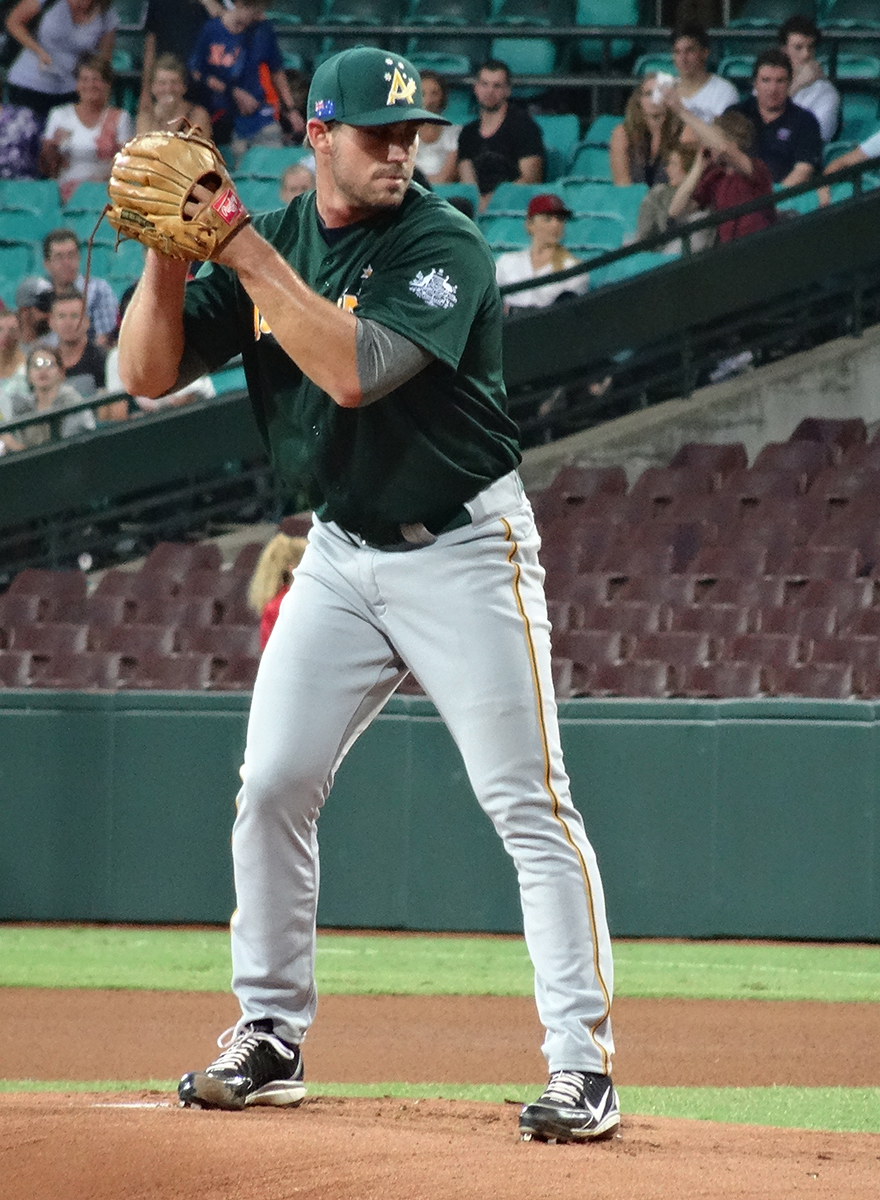 Bradley departed after pitching 3⅔ innings and allowing six hits and three earned runs. Arizona manager Kirk Gibson turned the game over to Charles Brewer (2⅓ innings) and Zeke Spruill (two innings), both of whom had made their major-league debuts in 2013.

Australia added its final two runs in the fifth, courtesy of hits by Welch, Hughes, Huber, and Kennelly. The early scoring gave the home team all the runs it would need.

After Atherton, relievers Craig Anderson, Wayne Lundgren, Richard Olsen, Scott Michinson, Todd Van Steensel, and Brad Thomas kept the shutout in order with one inning each. Only one Diamondback made it to third base, when Martin Prado walked in the fourth inning, advanced to second on Eric Chavez’s single, and stole third. Arizona collected nine hits to the Aussies’ 10 but struggled to create any real scoring chances as Australia closed out the 5-0 win.

It was only the third time any major-league teams had visited Australia, after the Spalding Tour in 1888-89 with the Chicago White Stockings and an All-America team, and the 1914 tour. The crowds for the two Australian games were a little disappointing, with mainly baseball diehards attending and around 10,000 people at each contest. The Dodgers-Diamondbacks series, by contrast, attracted over 38,000 each day.

As for the major-league opening series, Los Angeles beat Arizona in both games. Clayton Kershaw spearheaded a 3-1 win in the first clash, and the Dodgers held on for a 7-5 win in the final game. For Los Angeles, it was the first step in its path to a second consecutive National League West title; Arizona finished in last place in the NL West.

As a lifetime baseball fan, the Los Angeles-Arizona games presented me the first opportunity to watch major-league baseball live. The transformation of a traditional cricket pitch and playing area into a baseball diamond was miraculous; the atmosphere created easily matched that of a major-league game played at many of the current American ballparks.

Most memorable for me, as an Australian baseball historian, was the chance to replicate baseball history from the 1914 visit. The January 3 game in 1914 matched the White Sox against a local team of Australians. The Giants’ George “Hooks” Wiltse pitched for the locals and collected their only hit, a home run over the center fielder’s head — in a 10-1 Chicago victory.6 The game yielded an iconic photograph: a panoramic image of the teams playing, shot by Sydney’s Exclusive Studios.7

That panoramic photo from 1914 had proved popular with Australian baseball historians. An idea was born after MLB’s announcement of the 2014 games: Could that image be replicated a century later? 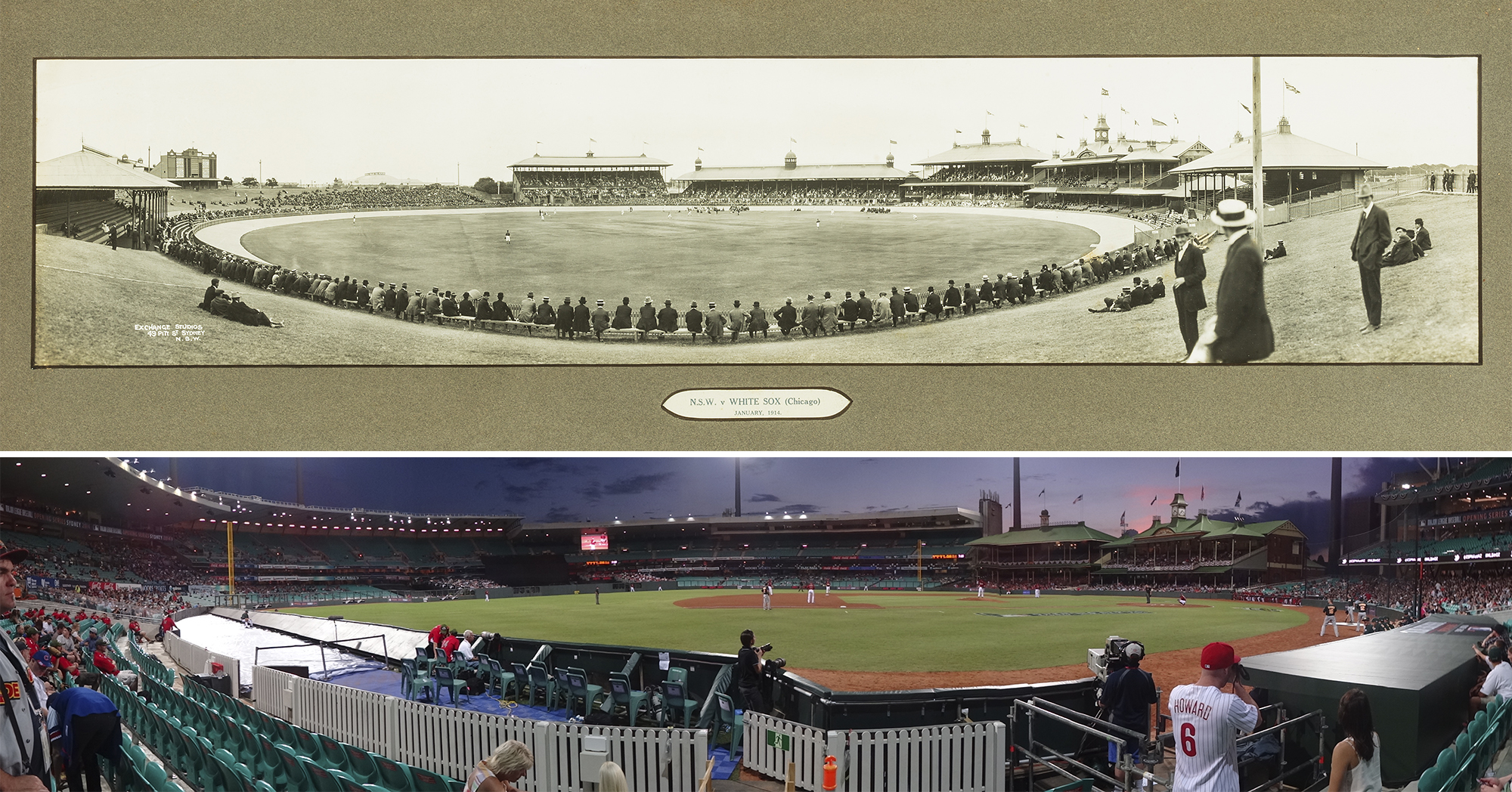 Repeating the scene would be complicated. The Sydney Cricket Ground had gone through many changes since 1914; it had few identifying landmarks from that time. Only the Members and Ladies Members Pavilions — the former topped with its distinctive clock — were still there from the time of the Giants and White Sox’ visit. Both had been added to the New South Wales State Heritage Register in 1999.

The photo was a unique challenge, as well as providing a “baseball road trip,” as I live in Adelaide, 1,375 kilometres away — or 15 hours’ drive!

I purchased — and practiced with — a camera equipped to handle taking a panoramic photograph, to ensure that the goal could be reached when the time arrived.

Because the original 1914 photo featured a major-league team and an Australian side, the aim was to set up the opportunity in the second clash featuring the local team, so I scouted for an ideal spot to shoot from during the first game between the Australian National Team and LA. The exact location was unavailable because of cement mounds but an ideal position was decided on, ready for the following day’s game.

The photographic opportunity happened after the bottom of the third inning, with Australia leading the Diamondbacks, 2-0. The area where the historic moment was captured was reasonably clear of spectators, with just enough people to help balance the shot and get a clear picture. The famous clock above the Members’ Pavilion was conspicuous and the obvious landmark to set up the photograph.

When the time for the photo arrived, patience, a steady hand, and a few tries met with success — history created! Hitting a home run is an achievement that gives players in all grades of baseball a boost of euphoria, which is how successfully getting this photo felt like. In fact, it probably was more like winning the World Series! Especially with the Aussies’ performance on the field — in both games.

As for the Sydney Cricket Ground, the area was first established for sports in 1849. The Moore Park name first came into prominence in the late 1860s. The original Members stand was built in 1878, with the current Members Stand built in 1886, with extensions added in 1903. The actual name Sydney Cricket Ground was first used in 1894. Many sports have been played at the ground, with cricket and rugby the most dominant sports using the ground. The first Test Cricket game was played between Australia and England at the ground in February 1882.

Since my first taste of major-league baseball, I have seen games at Wrigley Field, Fenway Park, and Yankee Stadium in 2018, and in 2019 I saw the two Red Sox-Yankees games in London. 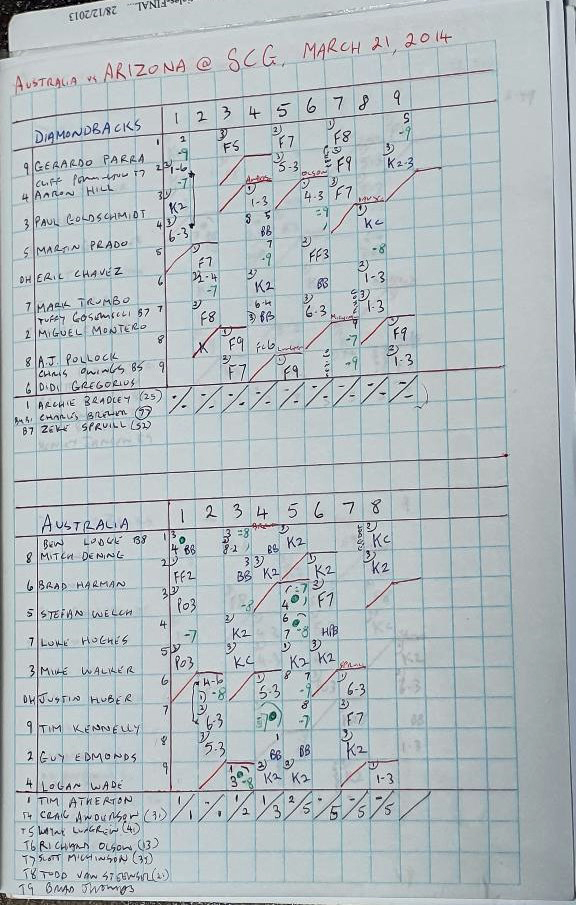