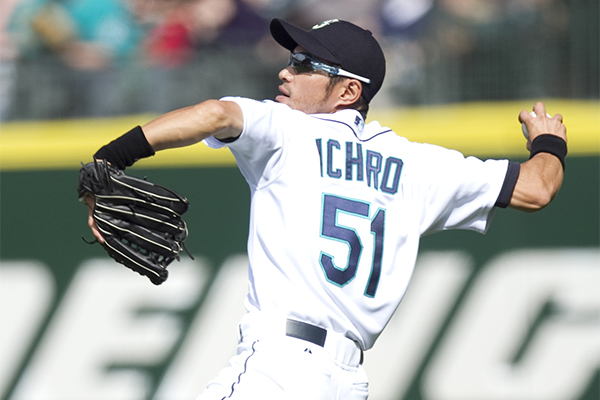 It is not always that a star player gets to “come back” to his original team, to finish his career and take his final at-bats to the admiration of his hometown fans.

In 2018, after spending six years away from the Seattle Mariners, including the last three with the Florida Marlins, Ichiro Suzuki was unsigned heading into spring training. A unique turn of events led the Mariners to sign Suzuki on March 7, 2018;1 early into the Cactus League season, the Mariners found themselves with injuries to three of their regular outfielders. Mitch Haniger was suffering from a hand injury, Ben Gamel was sidelined with a strained oblique, and Guillermo Heredia was recovering from offseason shoulder surgery.2

With the need for outfield depth, the Mariners looked outside the organization. Veterans like Melky Cabrera, Jose Bautista, and Carlos González were available, but this short-term fix would require high expectations of playing time coupled with a financial commitment that didn’t fit with the Mariners’ plans.3 Instead, they turned to the 44-year old Ichiro, who was still a strong outfielder but whose batting expertise was limited to slap singles. Although he represented a short-term fit, he brought to the team off-the-field preparation and a clubhouse presence that were assets to any team. “The addition of Ichiro gives our team another versatile and athletic outfielder,” Seattle general manager Jerry Dipoto said. “His incredible work ethic, preparation and focus will enhance our environment in many ways.”4

Ichiro arrived in Peoria, Arizona, the Mariners’ spring-training facility, on March 8, and held a press conference to express his excitement at rejoining the team.

Ichiro’s abbreviated spring training led to questions about his status for Opening Day. Calf tightness kept him out of early action. He was further sidetracked after getting hit in the helmet by a 91-mph fastball in a minor-league game.5 Although he accumulated a handful of at-bats late in spring training, there was concern that he would be healthy enough to start the season on the 25-man roster. “I don’t think he’s quite at 100 percent yet, but he’s moving much better and feels better out there,” manager Scott Servais said. “We’ll see how he feels tomorrow and make a decision from there.”6

On March 28, the day before Opening Day, the Mariners set their 25-man roster and Ichiro was on it. “It was a crazy spring for him, getting in late and having a little setback with the calf injury,” Servais said. “But I think he’s showed us enough in the last couple of days that he can get out there and run around and hopefully help us out a little bit.”7 Servais confirmed that he would start on Opening Day and bat ninth. His longtime achievements and game preparation were key factors in his making the roster. “That played heavily into the decision, his track record and what he’s done throughout his career,” Servais said. “You have to trust the player.”8 At 44 years, 5 months, and 7 days, Ichiro became the fifth oldest major leaguer to start on Opening Day.9

For years, the Mariners had made Opening Day a special event for the players and the fans. This was no exception, as they rolled out the red carpet to announce the coaches and players. About an hour before the 7:10 P.M. first pitch, the ceremonies began. At 6:46, Ichiro was announced, emerging to the loudest ovation of the evening.10

As the teams took the field, the game looked to be a classic pitching matchup. Felix Hernandez, the Mariners’ ace, coming off an injury-plagued season, faced Corey Kluber, the reigning Cy Young Award winner, who in 2017 was 18-4 with a 2.25 ERA. The Indians were the two-time-defending AL Central Champions, and the Mariners were coming off a third-place finish in the AL West, having finished six games under .500.

As he came to the plate, Ichiro could look out into right field and see a familiar sight. With the fans chanting “Ichi-Ro! Ichi-Ro,” he noticed the Ichi-meter, a sign that displayed Ichiro’s hit count that was invented in 2004 by Ichiro fan Amy Franz. The sign was in its familiar location, along the first row of right field, behind Ichiro’s normal position, and just above the fence. He seemed to smile at it as he prepared to bat and ultimately grounded out to first.11

After seven innings Ichiro was replaced in left field by Guillermo Heredia. He went 0-for-2, striking out in his second at-bat.

Hernandez pitched 5⅓ shutout innings and the bullpen took over after he walked Jason Kipnis with one out in the sixth. He threw 84 pitches and gave up only two hits. Kluber pitched a complete game for the Indians, keeping Cleveland in the game after giving up the two first-inning runs. The Mariners used five relievers to finish the game. Nick Vincent struggled in the seventh inning, allowing three hits and Cleveland’s only run, but he stranded the tying run at second base to maintain the lead for the Mariners. Future star closer Edwin Diaz pitched the ninth. Although he hit two batters, he struck out the side and saved the 2-1 win for Hernandez.

It was Hernandez’s seventh Opening Day victory, tying him with Randy Johnson, Tom Seaver, and Jimmy Key for the fourth-most Opening Day victories.12 “Can’t say enough about the job Felix did tonight,” manager Servais said. “Limited work in spring training and to compete like that. Really stayed with the game plan. His curveball was outstanding all night.”13

Ichiro remained with the team until May 3, when he was moved by the Mariners to the front office, effectively keeping him off the active roster for the remainder of the season.14 It was announced that his role with the team would be to serve as a mentor, front-office adviser, and batting, baserunning, and outfield defense instructor. “While this agreement only covers the 2018 season, it is our goal that Ichiro be a member of the Seattle organization long-term,” general manager Dipoto said.15

In front of his locker on the day before the opener, Ichiro was asked about his return to Seattle. “The dreams that I have, one of them came true,” he said through interpreter Allen Turner.16

2 Larry Stone, “Signing Ichiro a Good Short-Term Fix for Mariners, but What Happens after That?” Seattle Times, March 5, 2018.

8 Divish, “Not Only Healthy Enough.”