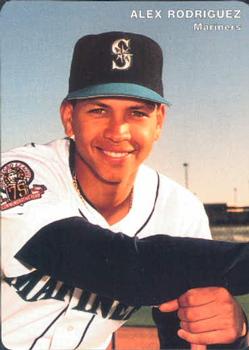 The anticipation might have been as great as any Mariners opener since baseball returned to Seattle 20 years previously. The 1995 team had staged a remarkable race to the AL West title and its first playoff appearance. The season was climaxed with a thrilling AL Division Series win against the Yankees, highlighted by a 12th-inning walk-off double by Edgar Martinez, and followed by an appearance in the AL Championship Series. (The Mariners lost to Cleveland in six games.) That fall, concurrent with the pennant race, a public vote had denied funding for a new ballpark and threatened the future of baseball in Seattle. However, after the season concluded, King County and the State of Washington stepped in to approve an alternate funding method that secured the future of the team in Seattle and guaranteed that a new ballpark would be built to replace the Kingdome.1

On the field, the team possessed some of baseball’s most talented players who many believed would lead the team to greater success. The roster was led by Ken Griffey Jr., arguably the finest player in baseball, and the reigning Cy Young Award winner, left-handed pitcher Randy Johnson.

With the team’s Seattle future assured, during the 1995-96 offseason the Mariners focused on three key areas that would build upon their 1995 success. First, they wanted to manage their payroll, as their improving talent was already beginning to drive up salaries. Second, they sought to replace key positions for players lost in free agency or traded. Third, they looked to bring in young talent to supplement current stars and build for the both the coming and future seasons.

After having made several trade deadline deals to improve their chances to win in 1995, the team allowed those players to become free agents. They included starting pitchers Tim Belcher and Andy Benes. “We do know that the risks we took were acceptable,” said manager Lou Piniella. “But that was last year. Now that we’ve got it going, can we keep it going? We know what we have to do, and we’ve already started. We have a plan for short range and long range.”2 During the offseason, the team traded first basemen Tino Martinez and popular local third baseman Mike Blowers.3 They replaced these key pieces with younger players like starting pitcher Sterling Hitchcock, reliever Edwin Hurtado, and third baseman Russ Davis. They further introduced Alex Rodriguez as their regular starting shortstop, batting ninth in the lineup. “This club,” Piniella said, “has an excellent opportunity to be a competitive one. It should be a good year.”4

The Chicago White Sox were looking to rebound after a disappointing 1995 season, when they entered the year with playoff aspirations but fell flat during the season. Terry Bevington had taken over as manager during the 1995 season. After leading the team to a record of one game over .500 during his 1995 tenure, he was rewarded with a contract to continue managing the team in 1996.5 Bevington brought the added benefit of a long history of working in the White Sox organization.6 With a strong offensive lineup built around future Hall of Famers Frank Thomas and Harold Baines, former first-round draft choice Robin Ventura, and newcomers Tony Phillips and Danny Tartabull, the team also had a capable pitching staff, highlighted by starters Alex Fernandez and Wilson Alvarez and closer Roberto Hernandez.

Only five players on the current White Sox roster were in the starting lineup the previous season. “It’s the most turnover since I’ve been here,” said Frank Thomas then a six-year veteran with the White Sox. “But I think we needed that. The players we had, I think, got tired of playing with each other.”7

It was against this backdrop that the teams opened their 1996 season at the Kingdome. A sellout crowd of over 57,000 was already assured, reported at the time as their eighth consecutive sellout and 10th in excess of 50,000.8 The sentiment of the fans in attendance recalled last season’s mantra of “Refuse to Lose” when, during the 1995 season, the Mariners rallied from 13 games behind the California Angels, starting on August 3.9 Randy Johnson, the Mariner ace, was scheduled to face the White Sox’ leading pitcher, Alex Fernandez.

The Mariners home opener was the first major-league baseball game ever played in March.10 As the first game of the 1996 season, it was televised to a national audience.

The pregame ceremonies staged by the club served as another reminder of the 1995 season. It consisted of a 35-minute program designed to rekindle the previous season’s dramatic race to the playoffs. “The goal is to make sure there isn’t a dry eye in the house,” said Dave Venneri, the Mariners’ marketing director.11

The pregame ceremony involved the normal introduction of the players, plus other special features, including the unveiling of the AL West championship banner, a video reenacting the run from 13 games behind the Angels to the AL Championship Series, a ceremonial first pitch by former Mariner Harold Reynolds, and the performance of the National Anthem by Huey Lewis and the News.12 It was a celebration far different from 1995 opener, when the Mariners had to cut ticket prices in half just to draw a crowd of 34,656.13

With Randy Johnson on the mound, fans reacted as if this was a continuation of the 1995 season. From the first batter, whenever Johnson reached two strikes, fans stood and cheered for a strikeout. In the first inning, after a leadoff walk followed by Johnson’s initial strikeout, Frank Thomas smacked a two-run homer to put the White Sox up 2-0. Those two runs would be the only ones scored by the White Sox.

For the power hitters in the Mariners lineup – Griffey, Edgar Martinez, and Jay Buhner – it was not a strong night. The trio ended up going 2-for-12, although they did walk six times and a highlight was Edgar Martinez’s double at a crucial point late in the game. Entering the bottom of the ninth inning, the Mariners trailed 2-1, having left 11 men on base through eight innings.

The Mariners’ comeback began in the ninth after Martinez’s double had tied the score, 2-2 and sent Joey Cora to third. Cora was thrown out at the plate as he tried to score the winning run. Another out, and the game went to extra innings.

Neither team scored in the 10th or 11th.

By the bottom of the 12th, the Mariners were ready for another late-inning walk-off. With one out, Doug Strange reached on an error by White Sox second baseman Ray Durham. Russ Davis doubled, and an intentional walk to Dan Wilson loaded the bases, Alex Rodriguez, in his first full year and on his way to a spectacular near-MVP season, singled in the winning run as the Mariners completed a 3-2 victory. Rodriguez explained his approach when he came to bat with the winning run on third base: “I just looked out at the pitcher (Bill Simas) and said, ‘Let’s go, me and you.’”14

With another 12th-inning rally, the 1996 season started much as 1995 left off. The Mariners had staged a rally in the ninth inning, then come from behind in the 12th inning to open the season victorious. It was a natural extension of the last season’s drama.

The White Sox were disappointed by the loss. “We had a chance,” said starting pitcher Alex Fernandez, long after he left the game in the sixth inning with a 2-1 lead. “Unfortunately, it didn’t work out that way. We need to win those games.”15 Frank Thomas was impressed by the Mariners comeback, commenting, “These guys are making a tradition out of coming back in the late innings now. They think they can win every game.”16

On an opening night that began with the past, the game harnessed all the familiar memories as the Mariners found a way to win, and to send their fans dreaming for a repeat of 1995.

16 Knight, “Sox Lament Letting Win over Johnson Get Away.”