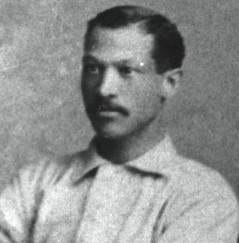 Although the misconception has long been debunked by baseball historians, many still believe that Jackie Robinson in 1947 became the first black man to play major-league baseball. Others contend that the recent discovery that former slave and mulatto William Edward White had a one-game major-league career in 1879 means he should be acclaimed as the first.

But White played baseball and lived his life as a white man. He said that he was white and so he was in his time. The distinction of being the first black man to play major-league baseball actually belongs to Moses Fleetwood Walker, who played the game openly as a black man in the 1880s and endured the consequences that resulted.

Walker first played professionally for the Toledos of the Northwestern League in 1883. That team won the pennant, and its success propelled the city into the major American Association the following year. Moses Fleetwood Walker went, too. Toledo and Walker made their major-league debut in Louisville on May 1, 1884.

Walker’s reputation preceded him to Louisville that day. In August of 1881, he had been in the city as a catcher for Cleveland’s semiprofessional White Sewing Machine club. His club was matched against the Eclipse, a team destined to become a charter member of the American Association the following season. Because some Eclipse players and management objected, Walker did not play.[fn]Thorn, John. Baseball in the Garden of Eden (New York: Simon & Schuster, 2011), p. 185.[/fn] The Louisville Courier-Journal speculated as to the reasons: “The prejudice of the Eclipse was either too strong, or they feared Walker, who has earned the reputation of being the best amateur catcher in the Union.”[fn]“A Disabled Club,” Louisville Courier-Journal, August 22, 1881, quoted in Dean Sullivan, ed., Early Innings: A Documentary History of Baseball 1825-1908 (Lincoln: University of Nebraska Press, 1995), p. 117.[/fn]

Prejudice remained in the Kentucky city when Walker returned for his major-league debut on May 1, 1884. The nation’s press paid him considerable attention. Walker’s biographer, David Zang, opined, “The Blade [Toledo, Ohio] remained loyally sympathetic throughout the season, and while the national Sporting Life decried overt racial incidents, other papers, particularly in the South, engaged in a constant—sometimes savage—campaign to denigrate Walker.”[fn]Zang, David W. Fleet Walker’s Divided Heart (Lincoln: University of Nebraska Press, 1995), p. 41[/fn]

Despite the many distractions presented to Walker, which included a refusal to serve him breakfast at the St. Cloud Hotel,[fn]“A Disabled Club.”[/fn] the catcher presented himself before the crowd of 3,500 at Eclipse Park and did play as scheduled. The Courier-Journal reported the game at length and in detail, calling it “a remarkably fine game, in which good pitching and fielding are the features.”[fn]Louisville Courier-Journal, May 2, 1884, p. 8.[/fn] The paper did mention Walker’s color in its commentary but reported no racial incidents. The final score of 5–1 in Louisville’s favor featured pitching and fielding. The pitchers were two of the 19th century’s best, Toledo’s Tony Mullane and Guy Hecker of Louisville. The pair would record 88 wins between them (52 for Hecker) in 1884. Both teams’ defenses played errorless ball—except for Walker.

The Toledo catcher had his troubles on defense, especially throwing, with—depending on the source—four or five errors and a passed ball. Sporting Life reported that “Toledo suffered greatly through the errors of Walker, who made three terrible throws.”[fn]Sporting Life, May 7, 1884, p. 6.[/fn]

The local press judged that “Mullane did good work in the square, but was poorly supported. Walker, the colored catcher, who has been spoken of as something of a wonder, appeared to be badly rattled, and made all the errors himself.”[fn]Louisville Courier-Journal, May 2, 1884, p. 8.[/fn] It also detailed each of the errors. In the fourth inning Chicken Wolf, who had drawn a walk, attempted a steal of second base. “Walker attempted to throw him out, but the ball went wide of its mark, [first error] and Wolf galloped on to third.  Monk Cline hit an easy grounder to short, and Wolf made a dash for the home plate.  Joe Miller fielded the ball to Walker, who failed to hold it [second error]. …”[fn]Ibid.[/fn] Later, in the sixth, “Cline struck out, but Walker dropped the ball [third error], and then threw badly to first [fourth error], letting Wolf score and Cline go to second.”[fn]Ibid.[/fn] Cline later scored.

From 4 o’clock until 7 the pool rooms were filled with the friends of the Toledos, and the result of each inning was watched with much interest. … The fielding of both clubs was fine, Walker, of the Toledos, proving the only exception, he making five [sic] errors and throwing low to the bases. … [fn]Ibid.[/fn]

Fleet Walker’s debut performance was a very poor one and, ironically, in his area of greatest perceived strength his defense. He fared poorly at the plate as well, but had plenty of company in that regard as his teammates managed only five hits off Hecker in a 5–1 loss. Walker sat out the next day but returned for the season’s third game, getting a hit from his cleanup spot and allowing three passed balls but otherwise playing errorless ball. 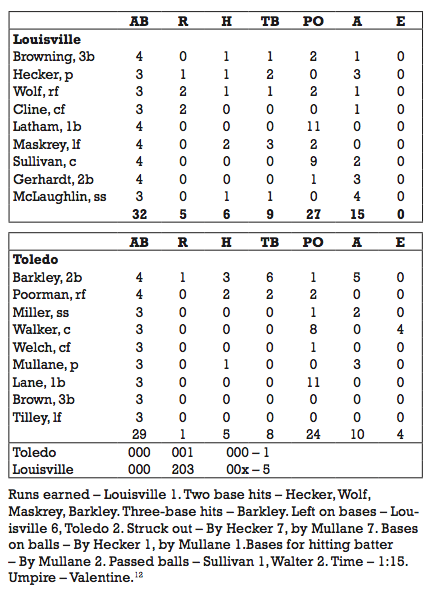