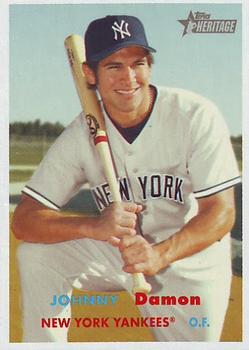 After 86 years, the 2004 Boston Red Sox won the World Series, ending what was at the time the second longest World Series victory drought in major-league baseball. Before sweeping the St. Louis Cardinals in four games to take the title, the Red Sox had to do something no major-league team had ever done before – win a seven-game series after losing the first three games. Two extra-inning wins in Games Four and Five, and a gutsy pitching performance in Game Six, set the stage for a winner-take-all Game Seven in the ALCS. The Red Sox jumped out to a 2-0 lead in the first on a David Ortiz home run, then Johnny Damon essentially put the game away with a grand slam in the second inning. For good measure, he added a two-run home run in the fourth inning, and the Red Sox won the American League pennant over their fiercest rival, the New York Yankees.

The self-described Idiots of 2004 were quite a bunch, and perhaps no one epitomized the nickname more than Damon. Signed in December 2001 to a four-year contract with the Red Sox, the center fielder quickly became a fan favorite, but it was his appearance, literally, in spring training that year that endeared him even more to the fans. After being clean-shaven his first two seasons with the Red Sox, Damon showed up in 2004 spring training with long hair and a beard. Having gained weight during the winter of 2003-04 when he had to rest because of a concussion in the 2003 ALDS, Damon took to racing cars in his neighborhood — on foot — to test his speed.

“I’ll wait on the side of the street and when a car starts coming, I’ll race it to my house,” he said. “So I know I can go at least 25 [mph]. Sometimes I scare them because they see this caveman running along.”1

The caveman comment quickly caught on with the fans, with Captain Caveman signs appearing at most Red Sox home games. His popularity grew through the 2004 season, and his two home runs that helped vanquish the Yankees only increased the fans’ love for him.

The Red Sox made the playoffs again in 2005, but with the team suffering from numerous injuries, they were swept in the ALDS by the eventual World Series champion Chicago White Sox. That offseason brought several changes to the team. Popular first baseman, and de facto leader of the 2004 Idiots, Kevin Millar, signed a free-agent contract with the Baltimore Orioles. Bill Mueller, the quiet third baseman, signed with the Los Angeles Dodgers. Backup catcher Doug Mirabelli, who was knuckleballer Tim Wakefield’s personal catcher, was traded to the San Diego Padres for second baseman Mark Loretta. To replace Damon and Mirabelli, the Red Sox and Cleveland Indians made a seven-player trade, with the Red Sox receiving center fielder Coco Crisp, catcher Josh Bard, and pitcher David Riske. But the most egregious transaction that offseason, at least in the eyes of Red Sox fans, was Johnny Damon signing a four-year contract with the New York Yankees, an act tantamount to treason in Red Sox Nation.

It doesn’t matter how popular a player was when with the Red Sox, if that player subsequently plays for the Yankees, and especially if he goes directly from the Red Sox to the Yankees, that player will be booed each time he appears at Fenway Park for the New Yorkers.

And so Red Sox fans circled Monday, May 1, 2006, on their calendars. That was the first Yankees game of the season at Fenway Park, and there were plenty of boos to be rained down on the newest Yankee villain, Johnny Damon. But Damon’s return to Fenway turned out to be just a footnote.

The Red Sox and Yankees went into the game tied for first place in the American League East Division, both three games over .500. Through the first month of the season, Bard, who took over the role of Wakefield’s personal catcher from Mirabelli, was having a very difficult time trying to catch the right-hander’s fluttering knuckleballs. In Wakefield’s first five starts of the season, Bard had 10 passed balls.2 Wakefield made five starts in April, with a 1-4 record. Concern among the fans, and even in the Red Sox clubhouse, was growing, that Bard was never going to be able to adjust to catching the knuckleball. 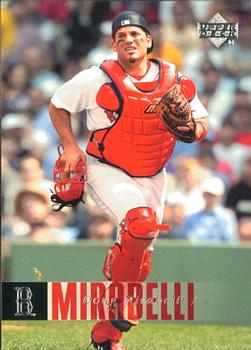 On April 26, Wakefield started against the Indians in Cleveland. Red Sox general manager Theo Epstein was on the trip, witnessed Bard’s continued futility against the knuckleball (four passed balls in this game), and felt the pulse of the Red Sox clubhouse. He then decided that he had to get a catcher who could handle the knuckleball. And he knew just who it should be. After returning home from the road trip, on April 30, Epstein called San Diego Padres general manager Kevin Towers and swapped Bard and minor-league reliever Cla Meredith for Mirabelli.

“No offense to anyone involved in the deal, but I point to that trade because it was the worst process I’ve ever had,” Epstein said. “We were faced with a challenging situation, Bard not being able to adjust quickly to handling the knuckleball.

“Instead of being patient and coming up with a creative situation, we got caught up in some of the panic that was enveloping our clubhouse. I got too close to the situation and made a really reactionary move.”3

The trade was completed around 10 a.m. Eastern time Monday, meaning there were only nine hours before that night’s game with the Yankees, a game Wakefield was starting.4

The Red Sox chartered a private plane to bring Mirabelli from San Diego to Boston. The plane left San Diego at about 1:15 p.m. Eastern time, and with an estimated flight time of six hours, it seemed that Mirabelli would not make it to Boston in time for the game. But the plane started making good time, and flight controllers cleared it over Cleveland airspace, and then over New York airspace. And despite a line of commercial flights waiting to land at Boston’s Logan Airport, the chartered jet was cleared to land, touching down at 6:48 p.m. Still, with the game starting just after 7 p.m., and Boston’s notorious traffic, the odds of making it in time were very long. The Red Sox typically use a state police escort when traveling between Logan and Fenway, and Red Sox traveling secretary Jack McCormick had a Massachusetts state trooper waiting at the airport to bring Mirabelli to Fenway.

On the journey, Mirabelli sat in the back seat and changed into his Red Sox uniform. After the first inning, Mirabelli realized he was missing one vital piece of equipment, especially for a catcher. In the cramped quarters of the state police vehicle, Mirabelli forgot to put on his athletic supporter. They arrived at Fenway at around 7:02 p.m. The first pitch was scheduled for 7:05, but the Red Sox delayed things a bit by having multiple first pitches, with the game eventually starting at 7:13. Mirabelli dropped Wakefield’s first knuckleball during warmups, which elicited some boos from the crowd, but they soon turned to cheers as he caught the second knuckleball.

In the top of the first, the event Red Sox fans had been waiting for all winter occurred when Johnny Damon stepped into the left-handed batter’s box to lead off the game. He was booed lustily. 5 with some cheers interspersed. Despite that, he tipped his helmet to the crowd, and the Red Sox dugout, and saluted Red Sox manager Terry Francona and Wakefield.

The game itself was fairly normal. The Red Sox took a 1-0 lead in the bottom of the first when Kevin Youkilis walked, took second on a Mark Loretta groundout, then scored on David Ortiz’s single.

In the top of the fourth inning, the Yankees took the lead on a single by Derek Jeter, consecutive walks to Jason Giambi and Alex Rodriguez, a couple of groundouts, and another single by Robinson Cano. The Red Sox tied it up in the bottom of the fifth, then took the lead for good in the bottom of the eighth on Mark Loretta’s single, and David Ortiz’s three-run home run. Wakefield went seven innings and received a no-decision, and Mirabelli was not charged with any passed balls. Mike Timlin got the victory. That alone was a win for the Red Sox.

The box score6 shows that Damon flied out to right for the first out of the game, and ended the game having gone hitless. But the real story of the day and the game was the return of Doug Mirabelli, in what is perhaps the most famous trade for a backup catcher ever.

In addition to the sources listed below, box scores can be found at Baseball-Reference.com and Retrosheet: