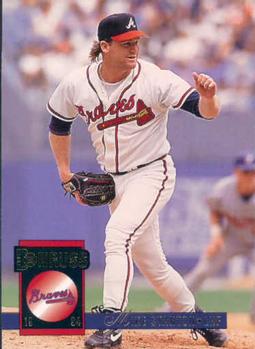 The Phillies (12-19) and Braves (19-11) were playing in their first series together since the NLCS the previous fall. Both teams were entering this series going in diametrically opposite directions. The defending NL champion Phillies had won their first three games of the season, but lost 19 of their next 28, including 13 of 15 on the road. This included a 7-2 loss to the Braves in the first game of their series. The Braves had won their first seven games and 13 of 14. Entering this game, the newest NL East member1 was 7½ games ahead of the Phillies and only the Cincinnati Reds (20-11) had a better record. Only the Chicago Cubs (9-20) and San Diego Padres (10-21) had worse records than the Phillies.

The Phillies opened the scoring in the third. Lenny Dykstra led off with a line-drive double to right.3 Mariano Duncan advanced Dykstra to third on a groundout to first. Ricky Jordan’s one-out sacrifice fly to center scored Dykstra.

The Braves tied the contest in the fifth on Charlie O’Brien’s leadoff home run, his second of the season. He was starting in place of rookie catcher Javy Lopez, who had fouled a pitch off his left foot and been hit by pitches twice the night before.4

The Phillies took the lead again in the sixth. Jordan led off with his second home run of the season. Then Dave Hollins walked and Mercker was replaced by Mark Wohlers. Pete Incaviglia greeted Wohlers with a groundball single to left, sending advancing Hollins to third. Wes Chamberlain grounded to first, scoring Hollins.

The Phillies opened up the lead in the seventh. Dykstra led off with a line-drive triple to left-center and scored on Duncan’s single to center. Jordan followed with a groundball double to left, advancing Duncan to third. Hollins walked for the third time in the game, loading the bases, and Wohlers was replaced by former Phillie Steve Bedrosian.5 Incaviglia greeted Bedrosian with a grand slam to left, and the Phillies led 8-1.6

After a scoreless bottom of the seventh, top and bottom of the eighth, and top of the ninth, Boskie was prepared to close out the game.

He started the bottom of the ninth having allowed only the one run, two hits (both by O’Brien), and two walks (Mark Lemke and Mercker), while striking out two (Rafael Belliard and Ryan Klesko) and throwing 110 pitches in eight innings.7

Boskie allowed three straight singles (Klesko, Fred McGriff, and David Justice) to start the inning, loading the bases. He was replaced by Doug Jones.8 Lemke’s groundball single to right scored Klesko. O’Brien’s single to left scored McGriff and Justice and advanced Lemke to second. Rookie Mike Mordecai, in his second major-league game, hit Jones’s 1-and-2 pitch, a fastball inside, to left for a three-home run, his major-league career hit. Lemke and O’Brien scored. “I don’t remember touching first base,” said Mordecai. “If they had appealed it, I don’t know what would have been called.”9 Jones was asked about coming into a non-save situation. “I think it might have been more concentration,” he said. “We were ahead 8-1. I needed some work. My focus was just to make them swing the bat. Then, before you could turn your head, it had all blown up on me. But there’s nothing I can do to make it come back.”10

After retiring Bill Pecota on a grounder to first for the first out of the inning, Jones allowed a Deion Sanders pop-fly single to left, and gave way to Heathcliff Slocumb. Pinch-hitting for Mike Bielecki, Dave Gallagher grounded out to third as Sanders took second. Slocumb was replaced by David West. Lopez lined West’s first pitch to right, scoring Sanders and tying the game, 8-8. The inning ended and the game went into extra innings when McGriff fouled out to third.

Altogether, the Braves sent a dozen hitters to bat in the ninth, scoring seven runs on eight hits. “I’ve been around this game a long time and I’ve never, ever seen anything like this,” Phils manager Jim Fregosi said. “Not just that they scored seven runs in the ninth. The whole bleeping game, to be honest with you.”11

The Braves came close in the 11th against Mike Williams, the Phillies’ fifth pitcher of the game. Mordecai led off with a walk and moved to second on Pecota’s sacrifice. Sanders was intentionally walked. However, Gallagher struck out looking and pinch-hitter Tom Glavine struck out swinging to end the rally.12

The Phillies came close in the 12th against Mike Stanton, the Braves’ seventh pitcher.13 With one out rookie Tom Quinlan hit a line-drive single to left and Todd Pratt walked.14 But Stanton got Mickey Morandini on a foulout to third and John Kruk on a fly to left.15 The Phillies had another opportunity in the 13th when Duncan singled to left with one out and stole second after Williams struck out swinging. Jim Eisenreich fouled out to left to end the inning.

The Braves also had a chance in the 13th. With one out Pecota singled to right and Sanders singled to center. But Gallagher grounded into a double play. They had another opportunity in the 14th. Stanton led off with a line-drive single to right and McGriff walked. Justice’s double-play ball moved Stanton to third. After Lemke was intentionally walked, O’Brien’s force-play grounder to shortstop ended the inning.

The Phillies’ Kruk reached on a one-out line-drive single to right in the 15th. Dykstra struck out looking. Duncan walked with two out, but Kim Batiste, pinch-hitting for Williams, flied out to left to end another opportunity.

Andy Carter entered the game in the bottom of the 15th inning. He was the Phillies’ sixth pitcher of the game and was making his fifth career appearance.16 He got two outs on fly balls to center. But Deion Sanders lined a double to center. After Gallagher was intentionally walked, Sanders stole third with pitcher Stanton at the plate.17 The Philadelphia Daily News’s Paul Hagen wrote: “Carter got two strikes on Stanton. Sanders danced off third. Stanton squared around to bunt. Instinctively, third baseman Tom Quinlan broke for the plate.” Stanton’s pop-bunt went over Quinlan’s head and scored Sanders to win the game.18 “It’s the first time I’ve ever seen a bunt like that drop in,” Fregosi said.19 “Actually, to tell you the truth, [the bunt] was supposed to go to first,” said Stanton, who earned the victory with four innings of three-hit shutout relief. “But (Carter) ran it in on me and I got good wood on it.”20

“There’s really nothing you can say,” the Phillies’ Pete Incaviglia said. “(Boskie) pitched a gem. We had a seven-run lead. Pretty unbelievable. I’m at a loss for words.”21

“Geez, this game, when things bad, boy! They just up and kick you,” said Fregosi.22

“You never know in this game,” said Incaviglia. “You might see a pitching matchup one night and think, ‘This club’s got no chance.’ And then you look in the paper the next night and see they ended up winning the ballgame. This game is crazy like that.”23

In addition to the sources cited in the Notes, the author referred to Baseball-Reference.com, and Retrosheet.org for box scores, play-by-plays, and other pertinent information.

1 After the 1993 season, the National League was divided into three divisions rather than two and the Braves moved from the West Division into the NL East.

2 Boskie ran for Morandini and scored a run two nights before, on May 8, against the Florida Marlins. This was his second career pinch-running appearance and his only one for the Phillies.

5 Hollins walked four times in this game, at the time a personal high. He walked again four times on May 23, 1995, versus the San Francisco Giants.

6 This was Incaviglia’s sixth career grand slam (second with the Phillies). It was the sixth grand slam Bedrosian allowed in his career.

7 Boskie pitched a complete game in his major-league debut, on May 20, 1990, against the Houston Astros.

8 Boskie pitched a complete game on June 27, 1994, versus the Florida Marlins. He started twice more for the Phillies before being traded to the Seattle Mariners on July 21 for minor-league first baseman Fred McNair.

12 Batting for Greg McMichael, this was Glavine’s only pinch-hitting appearance of the season. He had two career pinch-hits in 13 at-bats during his 22-year career.

16 Fregosi used 20 players in this game. Carter also pitched five innings in relief the night before when he replaced starter Juden in the third inning. Juden was ejected after hitting Lopez with a pitch after a Justice home run.

17 Sanders entered the game sharing the NL lead with 13 stolen bases and tied for second with five caught-stealings.

18 This was Stanton’s first and only career walk-off hit and it was the only multi-hit game of his career. He began his career 6-for-11 with a double, a run scored and two RBIs. Stanton finished his career 8-for-24.