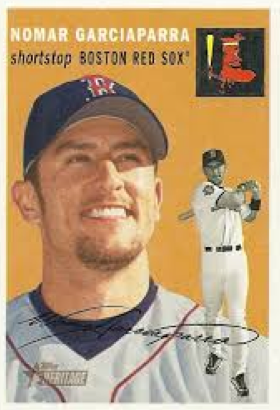 On May 10, 1999, the possibilities of grand slams filled Fenway Park, as the Seattle Mariners played the Boston Red Sox before a nighttime crowd of 21,660. Boston loaded the bases in four different innings, and Nomar Garciaparra cashed in, hitting two grand slams as the Sox beat the Mariners, 12–4. Garciaparra added a two-run home run to bring his RBI total to ten.

Boston’s Pat Rapp, with a record of 1-2 and an ERA of 7.97, faced Seattle’s Brett Hinchliffe, who was making just his third career start. The Mariners’ Brian Hunter led off the game with a single, stole second, moved to third on a sacrifice fly and scored on a Ken Griffey Jr. first-pitch single.

Boston bounced right back in their half of the first. Lead-off batter Jeff Frye singled to right and John Valentin followed with a single to center. Designated hitter Brian Daubach was hit by a 1-2 pitch, and the bases were jammed. Garciaparra picked on a 2-0 count and drove right-hander Hinchliffe’s offering into the Mariners’ bullpen beyond the right field fence. Before Hinchliffe had recorded an out, Boston was ahead 4-1.

With one out in the top of the second inning, Seattle’s Dan Wilson and Rafael Bournigal rapped out two singles. Wilson went to third and Bournigal thrown out at second by left fielder Troy O’Leary. Hunter walked but Rapp worked his way out of the jam. In the third, Griffey walked, David Segui singled and Jay Buhner walked, loading the bases for John Mabry. At this point, Boston skipper Jimy Williams yanked Rapp and brought in John Wasdin to pitch. Mabry hit a grounder to second, and Buhner was forced out, but Griffey came in to score Seattle’s second run of the game. Wasdin then induced Russ Davis to hit into a strike-‘em-out-throw-‘em-out double play to end the inning.

Daubach doubled to lead off the Boston third, and Garciaparra “sliced a two-run shot around the right-field foul pole off Hinchliffe in the third.”1 That blast past the Pesky pole gave Nomar six runs batted in after only two at-bats. O’Leary followed with a solo homer deep down the right field line on a full count pitch. The Red Sox weren’t done, though. Mike Stanley walked, Scott Hatteberg struck out, Damon Buford walked, and Darren Lewis singled into the hole at second, again loading the bases. Mariners’ manager Lou Piniella walked to the mound, signaling for a change. Ken Cloude relieved Hinchliffe and he managed to get Frye to pop out with the infield fly rule to the second baseman. With two outs, Valentin drew a four-pitch free pass, plating Stanley.

The game continued with the score 8-2 for several innings. Boston again loaded the bases in the bottom of the sixth, but O’Leary lined into a double play to end the threat. Buhner homered in the Seattle 8th for a single run, and Boston rallied in the bottom of the frame. Eric Weaver came on in relief and with a single and two walks, Boston packed the sacks for Garciaparra again. And Garciaparra again delivered with his second grand slam of the game, tying the major league record. Speaking to reporters about his first-pitch home run off of Weaver, Garciaparra said, “He probably could have thrown anything in that last at-bat and I was going to put a good swing on it. The last one, with the bases loaded, I was probably going to swing at anything.”2 The ball landed in the left-field screen beyond the Green Monster. Kip Gross relieved Wasdin with runners on first and second with one out in the top of the ninth inning. Hunter drove in Davis with a single for the fourth Seattle run of the game, but that’s all Seattle the Mariners mustered. The final score was 12-4.

The victory was Boston’s fifth in a row, bringing their record to 17-14. “It was amazing,” Garciaparra told reporters. “I’ve never hit three home runs in a game before – not in Little League, college, nowhere. I’m glad I waited until the big leagues to do it.”3 Nomar had hit his first career gram slam on September 2, 1998, and now he had three.

Mariners star Ken Griffey, who was 1-for-4 with a run scored and an RBI, was asked what amazed him most about Garciaparra’s performance. He responded with, “All those people that were on base in front of him. If he hit three solo shots, you wouldn’t be talking to me right now.”6

Hinchliffe earned his second loss of the season (with no wins), in allowing 8 earned runs on seven hits and three walks in 2-1/3 innings. The Seattle rookie yielded three home runs, two by Garciaparra. The Mariners ERA ballooned to 6.64, worst in the major leagues.

Pat Rapp started the game for Boston, but he was ineffective in just two plus innings of work. In registering only six outs, he gave up five hits and walked four. This was the fourth time in six starts that the right-hander failed to make it through the fourth inning. John Wasdin pitched 6-1/3 strong innings of relief to earn his first victory of the season. He allowed just 3 hits and two earned runs. He was appreciative of Garciaparra’s run support, saying, “I’ve already given him one hug tonight. I might just have to give him another.”7

The 3-for-4 performance lifted Garciaparra’s average to .327. He continued to have a hot bat, finishing the 1999 campaign with a .357 batting average, which led the American League. After this game, he said, “When you’re swinging well, good things happen. Today, things felt pretty good.”8