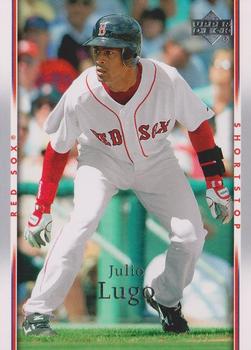 Baseball is different from most sports in the United States in this: There’s no clock, and the defense controls the ball. Both of these factors played a huge role in the May 13, 2007, game between the Boston Red Sox and the Baltimore Orioles.

It was a sunny, cool Mother’s Day in Boston with temperatures in the upper 50s.  Fenway Park was sold out, as had become the norm over the preceding years. Many of the players were using pink bats, and wearing pink wrist bands, in support of breast cancer awareness for Mother’s Day. Orioles shortstop Miguel Tejada, was playing in his 1,118th consecutive game, at the time moving into fifth place on the all-time list ahead of Billy Williams.1

The Red Sox’ starter was their ace, Josh Beckett. He had won his first seven games of the season, and was looking to tie the franchise record of eight straight victories to start the season, shared by Babe Ruth,Dave Ferriss, and Roger Moret.2 For the Orioles, Jeremy Guthrie was making just the fourth start of his career and only his third of the season, after previously being a reliever.  The Red Sox came into the game leading the American League East Division by seven games over the Orioles and New York Yankees.3 On paper it looked like a mismatch, but as the sports saying goes, the games aren’t played on paper.

Beckett pitched decently through four innings, giving up two runs on two hits, all in the first inning, but striking out seven.4 A torn flap of skin on the right-hander’s right middle finger led to his removal from the game after the fourth inning.5 It would turn out to be Beckett’s shortest outing, and the first of only three no-decisions, in a 20-win season, the only such feat of his career. The injury to his finger would land Beckett on the 15-day disabled list, with his next start not coming until May 29 against the Cleveland Indians.

Beckett was followed by Kyle Snyder and Javier Lopez, who combined to pitch 2 innings of 1-hit, 1-run ball. Joel Pineiro came on in the seventh inning and had a rough go of it. In an inning and two-thirds, he allowed six of the 10 batters he faced to reach base, on four hits and a pair of walks, with the Orioles scoring their final 2 runs of the game, to give them the 5-0 lead.

Meanwhile, Guthrie was cruising for Baltimore, taking that 5-0 lead into the bottom of the ninth, having given up only three hits and two walks on just 85 pitches. Julio Lugo grounded out to shortstop to lead off the Red Sox ninth. Coco Crisp was next, and popped up a 0-and-2 pitch in front of home plate. Orioles catcher Ramon Hernandez called for the ball, but dropped it near the third-base line for an error, allowing Crisp to reach first base.

Though Guthrie had pitched well up to that point, Orioles manager Sam Perlozzo replaced him with Danys Baez. Baez, outside of two rough outings against the New York Yankees and Detroit Tigers where he gave up a total of 5 earned runs in 1 1/3 innings, had pitched well thus far in the season, but promptly gave up an RBI double off the wall in left-center to David Ortiz. Wily Mo Pena, who had replaced Manny Ramirez in the top of the ninth inning, singled to put runners at first and third. With the tying run in the on-deck circle, Perlozzo brought in Orioles closer Chris Ray to try to earn the save. Ray fared no better than Baez, giving up a walk to J.D. Drew to load the bases, then another walk to Kevin Youkilis on a full count, to force in the second Red Sox run.

Jason Varitek, the seventh batter of the inning, hit the ball to the right-center-field gap and took second when Nick Markakis momentarily bobbled the ball. The official scorer credited Varitek with a 2-run double, his hit scoring Pena and Drew, and making the score 5-4 in favor of the Orioles. With one out and runners now at second and third, the Orioles issued an intentional walk to Eric Hinske to set up a force out at any base, or the possibility of a game-ending double play.

Alex Cora was the next batter, hitting a weak groundball to second base. The ball wasn’t hit hard enough to attempt a double play, so Orioles second baseman Brian Roberts elected to throw home to force out Youkilis. With the bases still loaded and now two outs, Julio Lugo, who had made the first out of the inning, came to bat.

Lugo worked the count full, then on the seventh pitch of the at-bat, hit a groundball to Orioles first baseman Kevin Millar, one of the heroes of the 2004 World Series champion Red Sox team. Millar ranged to his right to field the ball, as Ray ran over to cover first, with Varitek scoring. Millar tossed the ball to Ray, but the ball clanked off his glove, allowing Hinske, who had been the runner at second base, to score the winning run. A combination of four hits by the Red Sox and three walks and two errors by the Orioles, allowed the Red Sox to complete the comeback.

Coming into the bottom of the ninth, the win probability chart6 showed the Orioles with a 99 percent probability of winning the game. The Red Sox won 96games in 2007, and sweep the Colorado Rockies in the World Series.  Yet, as exciting as winning the World Series is, to come back from a 5-0 deficit with one out in the ninth inning and score six runs to win the game, likely makes this game the most exciting of the year.