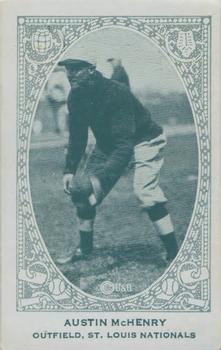 Heading into the 1921 season, St. Louis Cardinals outfielder Austin McHenry had shown promise in his two full seasons with the club. He hit. 286 in 1919 and .282 in 1920 with a combined 112 runs batted in.1 But no one would have predicted that his 1921 campaign would cause The Sporting News to proclaim him as one of the 10 best left fielders in baseball history. The writer added, “McHenry is without question one of the game’s greatest outfielders. And he is one of the game’s greatest hitters.”2

A game that illustrated McHenry’s newfound prowess took place on May 15, 1921, at Ebbets Field in Brooklyn against the defending National League champion Robins in the 10th game of a 26-game road trip for the Cardinals. Starting the season poorly, the seventh-place Cardinals had won only six of their first 21 games. But Austin was hitting an even .300 as he started in left field and batted sixth in the order. He was about to go on a tear that would raise his average to .375 by the time the Cardinals finally returned home on June 2.3

The Sunday crowd of 24,000 had hardly settled in their seats when the Cardinals made quick work of Robins starter Sherrod Smith, sending him to the showers after only four batters. After center fielder Les Mann led off with a single, first baseman Jack Fournier got an infield hit to third and continued to second on the wild throw to first with Mann scoring. The Robins tried to get Fournier heading to third on third baseman Milt Stock’s grounder, but the throw was late. Second baseman Rogers Hornsby doubled to make it 2-0 with Stock ending up on third. Brooklyn manager Wilbert Robinson called on Leon Cadore, who poured gasoline on the fire. Right fielder Germany Schultz greeted the new hurler with a single to score Stock. Then McHenry hit a drive to left field that bounded over the low fence in front of the left-field stands. That made it a home run under the rules of that era to clear the bases and make the score 6-0.4

A single by shortstop Ivy Olson, a catcher’s-interference call, and a single by Hi Myers sent home a run in the bottom of the inning against the Cardinals’ starter, southpaw Ferdie Schupp. The Cardinals extended their lead in the second against Sweetbread Bailey, just acquired from the Cubs several days earlier. With one out, Stock singled and Hornsby was hit by a pitch. Schultz doubled to right, scoring both runners. Then McHenry singled home Schultz. Brooklyn Catcher Otto Miller smashed a four-bagger that was a bounce homer in the bottom of the inning to make it 9-2.5

The game settled down after that as Bailey held the visitors to one run the rest of the way. Brooklyn closed the gap in the fourth on a walk to third baseman Jimmy Johnston, a double by Olson, and a bounce homer by right fielder Bernie Neis. Schultz’s triple and McHenry’s single scored St. Louis’s last run in the top of the seventh. With Schupp still on the mound in the ninth, the Robins plated a final run on a single by Olsen, a walk to left fielder Zack Wheat, and a single by Myers to make the final score 10-6.6

An incident in a June 26 game alarmed Rickey and made him suspect something was happening to his prized left fielder. McHenry started struggling to catch fly balls. When Rickey asked him if he was okay, Austin replied, “Yes, I feel all right, but I can’t see. I don’t know what it is. Maybe I’m going blind.” The spot on his forehead where he had been beaned six years earlier had become sore again. Rickey removed Austin from the game and ordered him to go home to Ohio to rest. He didn’t rejoin the team until late July.9

McHenry went 0-for-4 in his first game back. Then he didn’t play until three days later, when he pinch-hit, getting a single in what would prove to be his last at-bat. Seeing how much his young phenom was struggling, Rickey sent him home again. McHenry was admitted to Good Samaritan Hospital in Cincinnati.10

Doctors discovered a brain tumor and recommended a risky operation to remove it. The God-fearing McHenry told relatives, “It seems hard that so young a man as I must die, but I am ready when the Master summons me.” Right before the operation, he told Rickey that he felt like he was up to bat with the bases loaded with a 3-and-2 count but promised to “hit at the next one.”11

The operation took place on October 19. Doctors could not remove the entire tumor because of its location. Still, they hoped Austin could make a full recovery. However, that didn’t happen. He was sent home less than a month after the operation and five days later died with his wife and two children at his side.12 He was only 27 years old.13

Rickey, a very religious man himself, issued this statement: “We do not look upon the death of Austin as that of a ballplayer, but as a dear friend. He was one of our most popular players and was a particular favorite of the younger fans. …”14

In its obituary, The Sporting News said: “No ball club ever had a more loyal player and there are few outfielders in the game today who are as good as McHenry was at his best. His death is a distinct loss to baseball.”15